The Turkish president has said public could be canvassed on changes to protect what he called family values and the rights of women who wear headscarves. 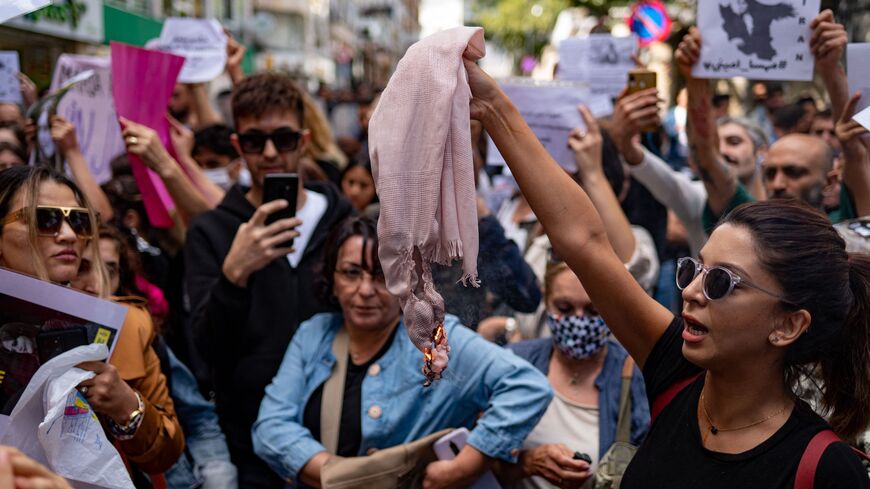 An Iranian woman living in Turkey holds a headscarf during a protest outside the Iranian consulate in Istanbul on Sept. 21, 2022, following the death of an Iranian woman after her arrest by the country's morality police in Tehran. - YASIN AKGUL/AFP via Getty Images

ISTANBUL — Turkish voters could be asked to vote on constitutional changes that would embody anti-LGBTQ clauses in the name of protecting the family after President Recep Tayyip Erdogan said Wednesday the amendment may be put to a referendum.

Addressing the parliamentary group of his Justice and Development Party (AKP), Erdogan said talks on the reforms with the party’s nationalist allies would be completed Wednesday and presented to parliament.

“We want the constitutional amendment proposal to be implemented with a broad consensus,” he said, referring to the parliamentary vote. “If this agreement is not reached, we … are ready to take other steps, including the referendum. We were not afraid of the arbitration of our nation. If there is no necessary majority in the parliament, our nation will have the last word.”

The proposal for constitutional changes began as a reform to protect Muslim women’s right to wear headscarves. Kemal Kilicdaroglu, who heads the Republican People’s Party (CHP), suggested a new law to enshrine the right last month as the opposition reached out to devout Turks ahead of next year’s elections.

Erdogan raised the stakes by insisting on a change to the constitution, adding that the reform would also include measures to protect family values.

“While the unity between woman and man based on legitimacy is scorned, perversion, immorality and crooked relationships are being encouraged intentionally,” he told a gathering of Islamic religious leaders in Istanbul on Monday.

“With this proposal, we aim to protect the family institution, which is increasingly threatened by deviant currents, while providing constitutional guarantees for the headscarf.”

Although the AKP and its allies, the Nationalist Movement Party (MHP) plus one lawmaker from the Great Unity Party (BBP), enjoy an absolute majority in parliament, they are short of the three-fifths majority required for a constitutional amendment.

The state-run Anadolu news agency reported Wednesday that senior AKP officials are due to visit opposition parties in a bid to drum up support for the changes.

Under the AKP’s 20-year rule, Turkey has seen three referendums. The last, held in 2017 under state-of-emergency conditions, introduced Erdogan’s sweeping powers as the country switched from a parliamentary system to an executive presidency.

However, the AKP period has never seen a referendum launched during an election campaign. Presidential and parliamentary elections are due within eight months. The 2017 referendum was held two months after it received presidential approval.

The suggestion of a referendum comes as opinion polls show Erdogan and the AKP struggling to retain power while Turkey is in the midst of an economic crisis.

The headscarf had largely faded as an issue following the repeal of laws banning it from public institutions. However, Erdogan, in an appeal to pious voters, has occasionally raised the prospect of the secularist CHP reintroducing the prohibition — accusations that likely sparked Kilicdaroglu’s call for a law to protect it.

The reemergence of the headscarf as a political topic appears to have exasperated women’s groups.

“I don’t want the headscarf problem to happen in these lands again,” said Saliha Okur Gumrukcuoglu, president of KADEM, a pro-government women’s organization, told the AKP-supporting Sabah newspaper in a recent interview. “I don’t want anyone to bring it up again. I don’t want them to use it.”

Erdogan’s daughter Sumeyye Erdogan Bayraktar, chair of the group’s trustees, added that it was “not sincere for political parties to use the headscarf.”

The Women’s Platform for Equality said the proposed changes were an attack on the principles of equal citizenship and secularism, two of the basic tenets of the Republic of Turkey.

In a statement, the group said the headscarf proposal sought to determine women’s dress and open “an area of intervention in women’s lives.” Meanwhile, “the government is trying to abolish the rights” of women and the LGBTQ community by imposing a family structure decided by the state.

LGBTQ rights groups such as Kaos GL have said the constitutional change would bolster discrimination and fuel hate speech and violence. Three anti-LGBTQ rallies were held across Turkey last month, following one in Istanbul in September that was backed by a the state broadcasting authority.