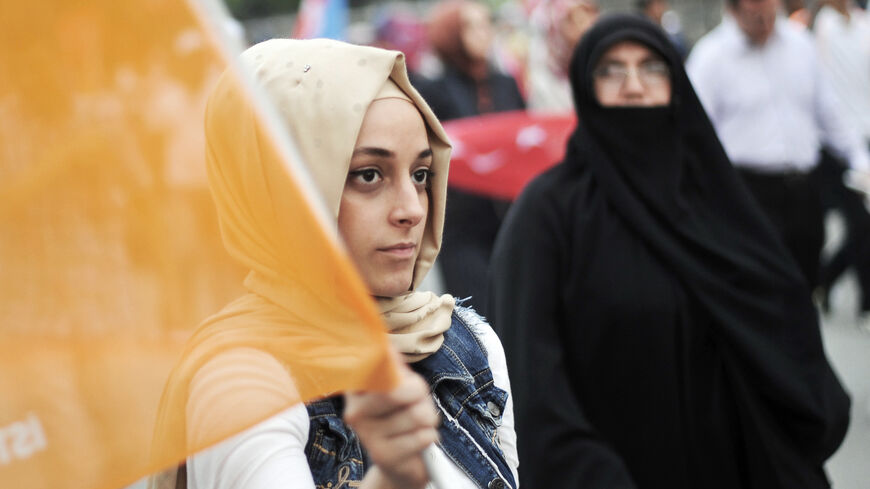 A supporter of Turkish Prime Minister Recep Tayyip Erdogan holds a Justice and Development party flag during a rally on June 16, 2013, in Istanbul. - OZAN KOSE/AFP via Getty Images

ISTANBUL — As women tear off their headscarves in Iran in protest of the regime, Muslim women’s right to wear the headgear has re-emerged on Turkey’s political agenda ahead of the elections.

This week has seen first the opposition and then President Recep Tayyip Erdogan raise the headscarf issue for national debate as the country enters the pre-election cycle.

Kemal Kilicdaroglu, leader of Turkey’s second-largest party, the Republican People’s Party (CHP), said on Oct. 4 that he would introduce a law to protect the right to wear a headscarf in public institutions.

In an apparent bid to seize back the initiative on an issue that his Justice and Development Party (AKP) has long seen as its own, Erdogan the next day ordered a constitutional change to enact the same protection.

A bar on the wearing of headscarves in public institutions was introduced in the wake of a 1980 military coup and affected university staff, students, lawyers, politicians, physicians and others in the public sector.

It became more strictly enforced after 1997 — when the military forced out an Islamist-led coalition government — but was gradually lifted by the AKP after 2008 as the block on students wearing headscarves on campus was rescinded. Five years ago, officers in the police and military — the final bastions of the ban — were permitted to wear the covering.

The CHP was at one time a supporter of the prohibition. Since lifting the ban, the AKP has raised the specter of a return of restrictions on religious expression should the secular opposition take power.

Opinion polls show presidential and parliamentary elections due by June of next year remain in the balance, with Kilicdaroglu — who is likely to be the opposition bloc’s presidential candidate — edging ahead of Erdogan as the president struggles with Turkey’s worst economic crisis in 20 years.

Lisel Hintz, assistant professor of international relations at Johns Hopkins University in Washington, said the headscarf issue had “faded from the set of issues being legally adjudicated” in recent years.

As part of a drive to appeal to pious voters, she said Kilicdaroglu’s move “seeks to signal to voters that they need not fear anti-pious discrimination under CHP leadership … [but] convincing voters in a highly polarized environment that a party is actually on a different path takes time and demonstrated action.”

Erdem Yoruk, associate professor of sociology at Istanbul’s Koc University, said Erdogan was seeking to move the public discourse away from the economy to identity politics.

“The opposition has learned the lesson to break down or undermine Erdogan’s capacity to play out such religious populist games,” he added. “So Kilicdaroglu has chosen to be proactive to propose something that even religious people hadn’t thought about.”

The CHP leader, in proposing a law on the issue, said he wanted to end the “deep polarization” in Turkish society.

“We are coming to power to heal all these open wounds,” he told his party’s lawmakers on Tuesday. In remarks aimed at Erdogan, he added, “It’s enough that you are abusing the belief and sentiments of women. We are submitting a draft law to end this shallow discussion.”

Despite saying his government had “solved this issue,” Erdogan called for a “solution at the constitutional level.” He added, “If there has been such an embarrassing issue like the headscarf issue in the past, it is because of the CHP mentality, [because of] CHP fascism.”

Kilicdaroglu gave qualified support for a constitutional change “if there is no cunning agenda behind it,” but it seems possible that the change could include other topics beside the headscarf.

The opposition-supporting Cumhuriyet newspaper on Thursday reported that Erdogan’s call for “additional changes” that will strengthen the “family institution consisting of the unity of men and women” could target the LGBTQ community.

Recent years have seen a growing hostility toward LGBTQ people in Turkey. While Istanbul Pride has been banned since 2015, last month conservative groups organized a state-backed anti-LGBTQ rally in the city. Critics portrayed it as a hate crime.

Interior Minister Suleyman Soylu has called LGBTQ a “perversion,” and Erdogan has accused LGBTQ activists of undermining “our national and spiritual values” and “poisoning” young people.

“Erdogan is trying to turn this into an advantage by mobilizing anti-LGBTQ sentiments among the swing voters and among AKP voters,” Yoruk said.