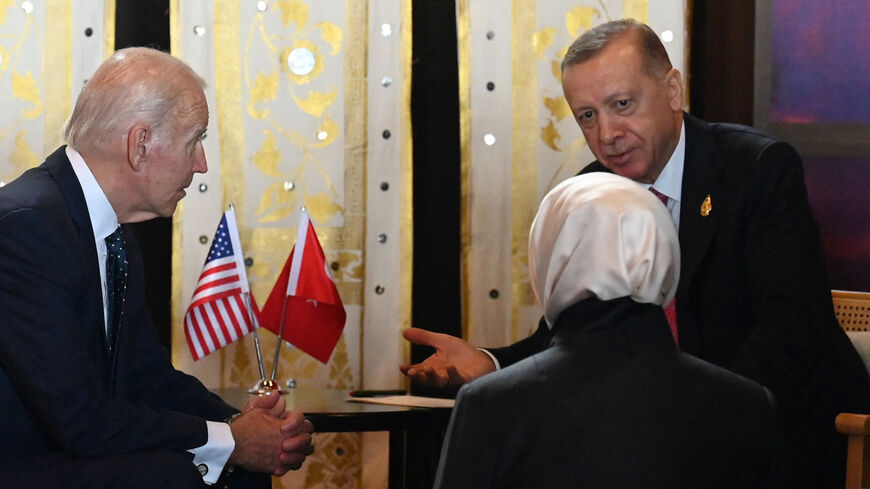 US President Joe Biden (L) talks with Turkey's President Recep Tayyip Erdogan (R) and an intrepreter during their bilateral meeting during the G20 summit in Nusa Dua on the Indonesian resort island of Bali on Nov. 15, 2022. - SONNY TUMBELAKA/AFP via Getty Images

Turkish President Recep Tayyip Erdogan and US President Joe Biden met on the sidelines of the G20 meeting in Bali, Indonesia on Tuesday. The agenda included NATO’s Nordic enlargement, the need to continue the Black Sea Grain corridor and the recent bombing in Istanbul.

Biden offered his deep condolences to Erdogan and the Turkish people on the acts of violence in Istanbul and expressed support for Turkey, a NATO ally, said the White House and Turkish Communications Directorate in separate, slightly nuanced statements.

The short and unannounced meeting was a rare contact between the two leaders, who have had few bilateral meetings and phone conversations since Biden took office. It comes in the wake of a major terrorist attack in the heart of Istanbul Sunday that killed six Turkish citizens and wounded eight. Turkish security forces arrested a Syrian woman they said admitted to planting the bomb, following orders from the outlawed Kurdistan Workers Party (PKK) and its Syrian offshoot. Both the PKK and Syrian Kurds denied having anything to do with the bombing. Pro-government news outlets, which published more details of the security operation Tuesday, claimed that the woman, Ahlam al-Bashir, was accompanied by a man, Ammar Jarkas, who maintained contacts in the Syrian city of Kobani. Jarkas was also reportedly arrested and questioned.

On Monday, Turkish Interior Minister Suleyman Soylu called the United States complicit in the Istanbul attack, accusing Washington of funding terrorist groups in Syria that target Turkey’s peace and security. Soylu was referring to the US partnership with the Syrian Democratic Forces, which were essential to the US-led effort to destroy the Islamic State. The military structure of the SDF is led by the People's Protection Units (YPG), which Turkey says is affiliated with the PKK. Ankara claims they share the same leadership cadres, organizational and military structure, financial resources and training camps.

“We reject and are deeply disappointed by any irresponsible comments to suggest that the United States had any role or responsibility in this despicable attack on Turkish citizens,” a White House spokesperson said in response to Soylu’s statement. “We stand ready to assist the Turkish authorities in their investigation.”

Shortly after meeting Biden, Erdogan tweeted a thank you message with the flags of all the countries and the logos of international organizations that have offered condolences after the terrorist attack in Istanbul. The American flag was dominantly displayed alongside Turkey’s top allies, the Turkish Republic of Northern Cyprus and Azerbaijan.

At home, the attack has appeared to revive the rhetoric pushing for a new military operation in northern Syria to establish a “safe zone” along the entirety of the Turkey-Syria border. Turkey has repeatedly voiced the possibility of an operation since last spring, prompting international reactions from the United States, Russia and Iran.

A senior Turkish official told Reuters Tuesday that Ankara plans to pursue targets in northern Syria after it completes a cross-border operation against the PKK in Iraq. Threats to Turkey from Kurdish militants or the Islamic State are unacceptable, the official said, adding that Ankara will clear the dangers along its southern border "one way or another."

In parliament, Devlet Bahceli, the leader of the Nationalist Movement Party and Erdogan’s political ally, renewed calls to close down the pro-Kurdish Peoples’ Democratic Party (HDP), which he called “the vile sister of the PKK.”

“Separatist terrorism is the biggest problem of Turkey … We do not want separatists in parliament,” Bahceli said. “We can no longer tolerate that the HDP, which recruits people for the terrorist groups, remain part of our political system.” A week ago, Bahceli had surprisingly defended the ruling party’s meeting with the HDP to discuss constitutional changes.

Bahceli also spat ire at “foreign capitals” who supported terrorism against Turkey, referring explicitly to Washington and its “insincere condolences.”

Besides the Istanbul attack, Erdogan and Biden have taken up the NATO enlargement, just as in their bilateral meeting during NATO’s June summit, Erdogan lifted his veto on the bids by Sweden and Finland to join the alliance. But Ankara has yet to send the accession protocol to its parliament for ratification. Earlier this month, both NATO Secretary-General Jens Stoltenberg and Sweden’s new Prime Minister Ulf Kristersson visited Turkey to persuade Erdogan that Sweden had lived up to its promises to control anti-Turkish groups in its territory. But neither could persuade Erdogan to give a timetable for the ratification. The next rendezvous between Turkey and Sweden is tomorrow, when Deputy Foreign Minister Faruk Kaymakci heads for Stockholm.

Biden had promised his administration's support to push F-16 fighter jet sales to Turkey through Congress, according to the Turkish readout. The US president also expressed his appreciation to Erdogan for his efforts to renew the Black Sea Grain Initiative, which they both agreed has been critical to improving global food security amid Russia’s war and must continue.