Egypt bets on US to restart talks on Nile dam dispute

Egypt hopes that the momentum from the COP27 summit will help to resume the stalled negotiations on the controversial dam Ethiopia is building on the Nile. 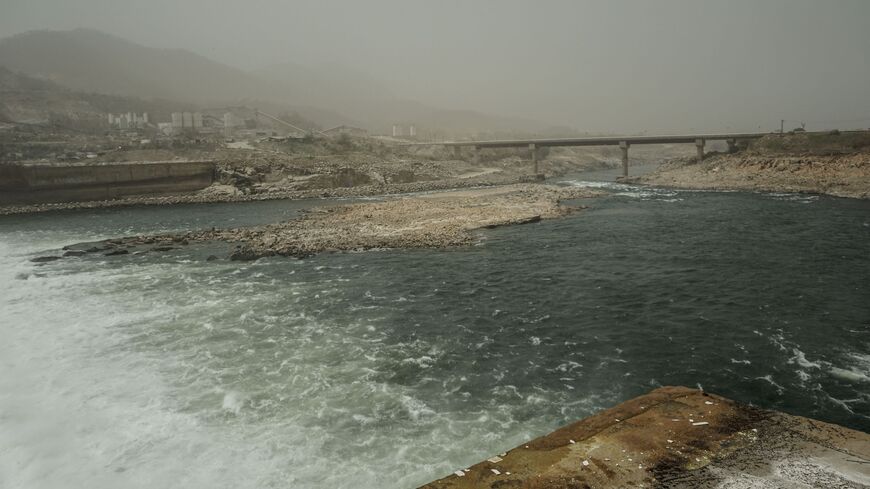 The Blue Nile river after it flows from the Grand Ethiopian Renaissance Dam (GERD) in Guba, Ethiopia, on Feb. 20, 2022. - AMANUEL SILESHI/AFP via Getty Images

CAIRO -- Ethiopia took advantage of its participation in the UN climate summit COP27 in Egypt’s Sharm el-Sheikh to highlight the Grand Ethiopian Renaissance Dam (GERD) as a key to regional cooperation in renewable energy.

Following the summit, Egypt hopes to resume the stalled negotiations with Sudan and Ethiopia to reach a binding legal agreement on the GERD, which Ethiopia is building on Egypt’s main water lifeline, the Nile River. Cairo fears the GERD will affect its share of the river’s water.

In a Nov. 17 interview with Asharq Al-Awsat newspaper, Monica P. Medina, the US special envoy for biodiversity and water resources, spoke about the US's role in resolving the water conflict.

“The US administration has appointed a special envoy for the Horn of Africa [Mike Hammer], and he is working hard to find a solution," she said.

Medina stressed “the need to ensure adequate awareness about not wasting water, as well as providing low-cost technological solutions to improve use efficiency.” She recalled that USAID has a diversified range of programs to help farmers in Africa manage water resources.

US President Joe Biden reiterated his country's support for Egypt's water security and water rights in the Nile River, during a meeting with Egyptian President Abdel Fattah al-Sisi on the sidelines of the COP27, in the first visit by Biden to Egypt since taking office two years ago. During the meeting, Sisi called on the US to play an “influential role” in resolving the GERD crisis.

Washington called the leaders of Egypt, Sudan and Ethiopia to a US-Africa summit in Washington, DC, slated for Dec.13-15.

According to the US State Department’ website, “The summit will demonstrate the United States’ enduring commitment to Africa, and will underscore the importance of US-Africa relations.”

Meanwhile, Egyptian and US officials participated recently in a conference organized by the Washington-based National Council on US-Arab Relations.

During the conference, Egyptian MP Mohammed Abu al-Enein said that the US holds the “key to resolving the crisis and has the ability to pressure Ethiopia to negotiate in good faith and with serious political will and within a specific time frame,” warning that failure to settle the crisis heralds new conflicts in the region.

US diplomat and former ambassador to Ethiopia Tibor Nagy stressed that relations with both Egypt and Ethiopia are very important to Washington.

He told Al-Monitor, “Egypt is an important partner in the Middle East while Ethiopia's gaining ground in the Horn of Africa. This explains the vague US statements on the GERD issue. Nevertheless, the US is seriously seeking to solve the crisis under the Biden administration." But, he said, Ethiopia refused  to sign an agreement during President Donald Trump's tenure, which led the administration "to urge with a sharp tone the foreign and irrigation ministers of the three countries to reach an agreement.”

Nagy argued that the US Treasury Department spearheaded the mediation efforts during the previous negotiations, although the US State Department was best able to deal with a complex crisis such as the GERD.

He added, “Now, the Biden administration has changed its approach and appointed a US envoy to the Horn of Africa, which clearly indicates how serious Washington is. ... Addis Ababa is stalling to gain time by insisting on the mediation of the AU and AU experts only.”

Nagy pointed out that the main problem is the failure of Egypt and Ethiopia to reach an agreement, adding that Sudan will agree to anything that the other two agree on, because it would benefit from the GERD by regulating the waters of the Blue Nile and generating electricity.