The White House is signaling it could hold up further arms sales to Saudi Arabia, but so far the rare public dispute has not impacted direct military cooperation between Washington and Riyadh. 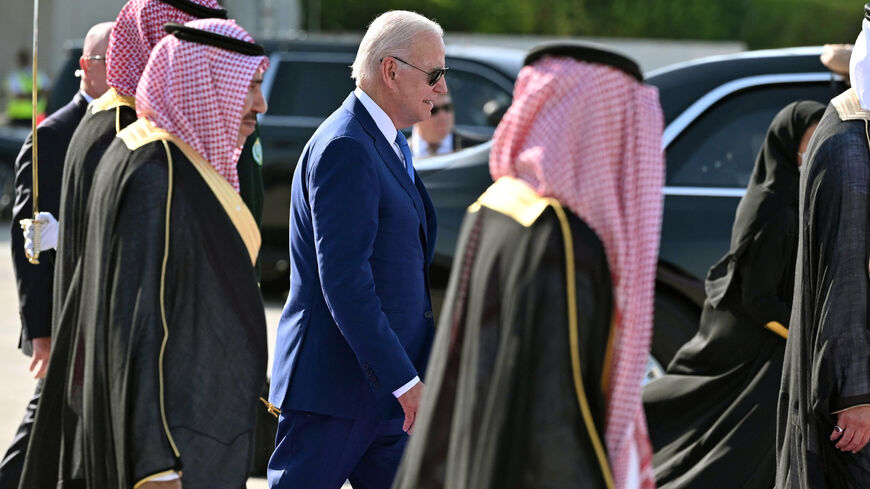 US President Joe Biden boards Air Force One before departing from King Abdulaziz International Airport at the end of his first tour in the Middle East as president, Jeddah, Saudi Arabia, July 16, 2022. - Mandel Ngan/AFP via Getty Images

TAMPA, Florida – Direct military coordination between the United States and Saudi Arabia remains on schedule despite the two countries’ public dispute over OPEC’s recent decision to slash oil production, according to US officials.

The White House postponed a working group meeting set for today between US and Gulf Cooperation Council representatives in response to the oil cartel’s Oct. 5 announcement, which comes ahead of key midterm elections in the United States, the Wall Street Journal reported last week.

Senior civilian officials at the Pentagon were scheduled to attend the meeting to discuss advancing Washington’s proposal to integrate missile and air defense networks across the Middle East as a defensive bulwark against Iran, officials told Al-Monitor.

On Capitol Hill last week, key lawmakers from Biden’s own party vowed to block arms sales to Riyadh over the OPEC+ decision, accusing the kingdom of siding with Russia in its war against Ukraine.

But behind closed doors, the steady pace of meetings between the top brass at US Central Command (CENTCOM) and senior generals from OPEC member nations is thus far expected to continue, officials say.

The head of all American troops in the Middle East, US Army Gen. Michael “Erik” Kurilla, and his aides arrived in the region on Sunday ahead of a regular summit with regional defense chiefs this week, Al-Monitor has learned.

CENTCOM’s deputy director of operations, Brig. Gen. John Cogbill, is also scheduled to sit down with counterparts in the Gulf before the end of the month to continue discussions about ways forward on regional military cooperation, including on air and missile defense.

Why it matters: The continued coordination suggests the White House is seeking to compartmentalize the damage from what appears to be one of few historic nadirs in the seven-decade relationship between Washington and Riyadh.

Biden said earlier this month his administration would impose “consequences” for oil-producing bloc’s decision to cut 2 million barrels per day, which comes as Europe faces a looming energy crisis and threatens to undermine US-led efforts to economically isolate Russia over its war against Ukraine.

White House national security coordinator John Kirby stated last week that the president would “reevaluate” ties with the Saudi kingdom, but later clarified that that does not entail a formal policy review.

Meanwhile, Pentagon officials are steering clear of the dispute in the hope that military ties will continue to serve as an anchor for the broader US partnership with Saudi Arabia, as they have during previous diplomatic storms.

“Our purview is, until directed otherwise, to maintain military-to-military relations,” a US defense official told Al-Monitor on the condition of anonymity.

What’s next: The White House is signaling that it's willing to work with top Democrats in Congress who have called for curtailing arms sales to Riyadh.

Last week, the chair of the Senate's Foreign Relations Committee, Bob Menendez (D-NJ), called for an unprecedented halt to “all aspects of security cooperation with Saudi Arabia, including any arms sales and security cooperation beyond what is absolutely necessary to defend US personnel and interests.”

Shortly after taking office, Biden barred transfers of offensive weapon systems to the kingdom, but could potentially further leverage the large bureaucratic backlog of pending US arms sales to Gulf states — a source of irritation among leaders in Riyadh and Abu Dhabi, according to current and former officials close to the discussions.

US national security adviser Jake Sullivan acknowledged on Sunday that the administration remains open to “changes to our approach to security assistance to Saudi Arabia.”

Sullivan reiterated that Biden would wait until Congress returns from recess after the midterm elections to consult with lawmakers from both parties on how to move forward.

“The president isn’t going to act precipitously,” Sullivan emphasized on CNN. “What I will say is there’s nothing imminent.”