Lawmakers in Congress are threatening to hold up arms sales to Saudi Arabia over OPEC+’s decision to slash global oil production. 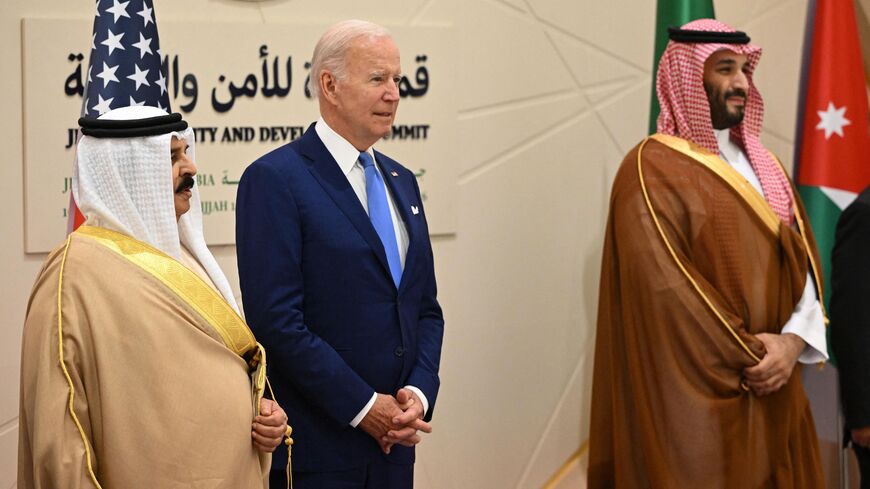 Lebanon and Israel reached a historic maritime border agreement which mediators in Washington say will prevent conflict between the two countries over Mediterranean gas reserves.

Lawmakers in Congress are threatening to hold up arms sales to Saudi Arabia over OPEC+’s decision to slash global oil production, and Turkey’s F-16s aren’t getting off the tarmac until the top Democrat on the Senate’s foreign relations panel sees some changes in Ankara’s foreign policy.

US President Joe Biden will “re-evaluate” Washington’s decades-long partnership with Saudi Arabia in the wake of OPEC+’s decision to slash oil production by 2 million barrels per day, the White House said Tuesday.

“I think the president’s been very clear that this is a relationship that we need to continue to reevaluate, that we need to be willing to revisit, National Security Council coordinator John Kirby told CNN. “And certainly in light of the OPEC decision, I think that’s where he is.”

Kirby later clarified that the appraisal does not constitute a formal policy review, and Pentagon officials are signaling steadfast continuity in ties with the Saudi military.

But a planned Oct. 17 working group meeting between GCC states and the United States on proposed integrated air and missile defense cooperation has been postponed on order from the White House, the Wall Street Journal reported Wednesday.

A senior US military official confirmed the news to me yesterday, noting that a handful of Pentagon officials were expected to attend that trip. But that official and one other told me that direct military-to-military cooperation between US CENTCOM and the Saudi Armed Forces has so far not been touched by the diplomatic fracas.

The White House’s statement on Tuesday came after a wave of bitter criticism from members of Biden’s own party on Capitol Hill.

Earlier this week, the influential chair of the Senate’s Foreign Relations Committee, Bob Menendez (D-NJ), vowed to block “all aspects of cooperation with Saudi Arabia, including any arms sales and security cooperation beyond what is absolutely necessary to defend US personnel and interests.”

Accusing Saudi Arabia of siding with Russia against the United States and its allies, the senator said he would hold up “any cooperation with Riyadh until the kingdom reassesses its position with respect to the war in Ukraine.”

Rep. Gregory Meeks (D-NY), head of the House Foreign Affairs Committee, joined Menendez on Wednesday, saying he too would oppose new arms sales and military assistance to Riyadh “beyond the support of existing defensive systems until the kingdom reverses its position.”

The Saudi government has rejected this accusation, saying economic concerns led it to pass on private requests from the Biden administration that OPEC not cut production in a way that could affect the midterm elections in Washington.

Sen. Chris Murphy (D-Conn.), a longtime critic of Crown Prince Mohammed bin Salman, supported his colleagues’ calls to halt military support to the kingdom and urged the United States to redirect its remaining Patriot air defense batteries — and a pending AMRAAM missile sale to Riyadh — for use against Russia’s actions in Ukraine instead.

Lebanon and Israel agreed to a draft deal mediated by the United States to end a decades-old maritime boundary dispute between the two countries, which remain technically at war since 1948.

Washington officials expressed confidence on Tuesday that the deal will help avert future conflict between the two countries while alleviating Lebanon’s fiscal crisis and easing Europe’s energy needs amid reduced exports from Russia.

Lebanon’s President Michel Aoun and Israel’s Prime Minister Yair Lapid separately acknowledged the deal in statements on Tuesday, however it still needs to be ratified by the individual governments, which do not have formal diplomatic relations.

US President Joe Biden called the deal "a historic breakthrough in the Middle East,” which came after months of diligent mediation by US envoy Amos Hochstein and his team.

Two top administration advisors speaking to reporters on the condition of anonymity on Tuesday pushed back on criticism from former members of the Donald Trump administration who have criticized the deal, alleging it entails unreasonable concessions from Israel.

“Many people have said over the last several days that a better deal could have been done for one side or the other,” one senior US official told reporters.

“Others claim that they could’ve negotiated a better deal — some from the region, some from the United States. They were in power. They did not reach a better deal. And when those so-called better terms were on the table, they ended up not reaching an agreement,” the official continued.

(Israel’s former Prime Minister Benjamin Netanyahu has warned that, if re-elected in November, his government won’t be bound by the agreement, over which he flippantly accused current acting Prime Minister Yair Lapid of selling off Israel’s gas reserves to Hezbollah).

“This agreement is not a win-lose agreement,” the official stated, adding, “The parties are not getting more than the other because they get different things.”

“The win for Israel is around security, stability and economic gain. The win for Lebanon is economic prosperity, economic development, foreign direct investments, and hope for an economic recovery,” the official said. (For a leaked copy of the deal’s text, check out Barak Ravid’s tweet).

The two senior officials wouldn’t say whether Hezbollah had agreed not to attack Israel’s Karish gas rig. Two Lebanese officials told Reuters on Tuesday that the Iran-backed group had accepted the US-backed proposal.

Enabling the agreement deal falls squarely in line with the Biden administration’s conservative approach to the Middle East, which aims to foster stability by encouraging economic growth and interdependence between regional countries.

“It’s time to eschew grand designs in favor of more practical steps that can advance US interests and help regional partners lay the foundation for greater stability, prosperity and opportunity for the peoples of the Middle East,” the White House’s long-anticipated National Security Strategy, released on Wednesday, read.

The Senate on Tuesday dropped two amendments from next year’s defense spending bill that would have placed restrictions on the Biden administration's plans to upgrade Turkey’s F-16 fleet.

The proposal is seen as a lifeline for US-Turkey strategic ties, which have been in the pits since the Turkish military, the second-largest in NATO, acquired Russia’s S-400 air defense system in 2019.

Turkish sources are expressing optimism over the F-16 deal, with one official telling Al-Monitor’s Amberin Zaman that Ankara expects technical talks with Washington over the sale to wrap up in November.

But the top Democrat on the Senate’s Foreign Relations Committee isn’t budging.

“An NDAA amendment is only one tool at our disposal to advance US interests in the Mediterranean,” New Jersey Senator Bob Menendez tweeted yesterday.

“Let me be clear,” he continued, “I will not approve any F-16 case for Turkey until [Turkish President Recep Tayyip] Erdogan halts his campaign of aggression across the region.”

The Pentagon, of course, fully supports the proposal.

To get the Security Briefing in your inbox each week, sign up here.