The United States designated the 15 Khordad Foundation for financially backing the call for Salman Rushdie’s death. 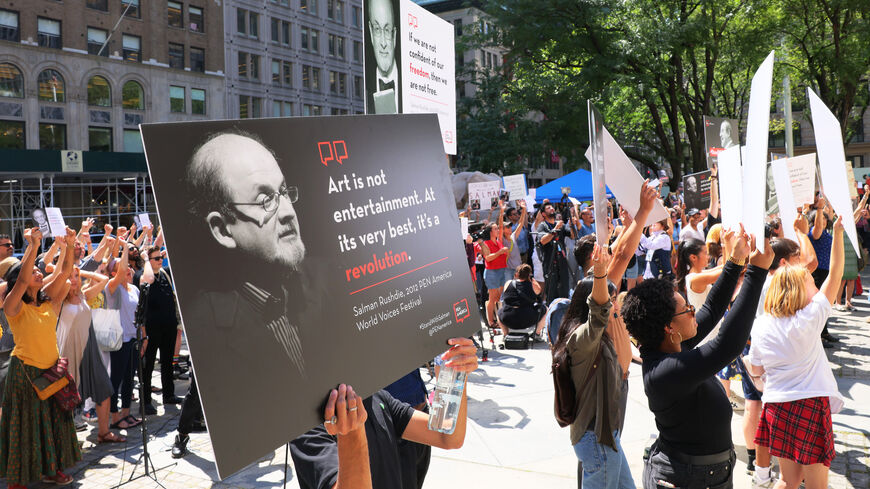 People hold signs as they gather at the steps of the New York Public Library to show support for author Salman Rushdie on Aug. 19, 2022, in New York City. - Michael M. Santiago/Getty Images

The US Treasury Department on Friday sanctioned an Iran-based foundation that maintains a multimillion-dollar bounty on Salman Rushdie, the British-American author attacked on stage in New York in August.

In 1989, then-Iranian Supreme Leader Ayatollah Ruhollah Khomeini issued a fatwa calling for Rushdie’s death over his portrayal of the Prophet Muhammad in his acclaimed novel “The Satanic Verses.” The 15 Khordad Foundation, which is affiliated with the supreme leader, has since “committed millions of dollars to anyone willing to carry out this heinous act,” Treasury said in a news release.

The department said the "so-called charitable foundation" increased its bounty on Rushdie from $2.7 million to $3.3 million in 2012 and has “publicly advertised their offer, claiming the entire sum would be given immediately to anyone who assassinated Rushdie.”

Secretary of State Antony Blinken described the incitement and recent attack on Rushdie as “a blatant assault on freedom of speech and an act of terrorism.”

“Today’s action is another clear signal that we will not stand by in the face of it,” Blinken said in a statement.

Rushdie, 75, was stabbed on stage while preparing to give a talk at a literary event in western New York on Aug. 12. According to his agent, Rushdie lost sight in one eye and the use of one of his hands.

The 24-year-old New Jersey man accused of stabbing him, Hadi Matar, pleaded not guilty to attempted murder charges. Iran denied involvement in the attack but said the famed author has crossed “red lines.”

“This act of violence, which has been praised by the Iranian regime, is appalling. We all hope for Salman Rushdie’s speedy recovery following the attack on his life,” said Brian Nelson, the Treasury Department’s under secretary for terrorism and financial intelligence.

The designation of the 15 Khordad Foundation comes two days after the Biden administration unveiled a new tranche of sanctions targeting 14 Iranian individuals, including Islamic Revolutionary Guard Corps commanders and a provincial governor involved in the state’s brutal crackdown on protesters.