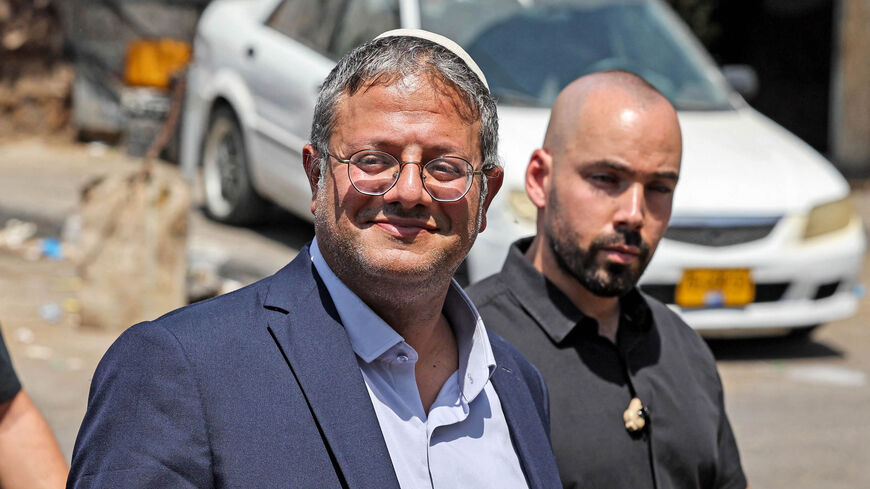 Itamar Ben-Gvir (L), Israeli far-right lawmaker and leader of the Jewish Power party, arrives with other Israeli right-wing activists at the archaeological and religious site of the Tomb of Samuel in Nabi Samuel village, between Ramallah and Jerusalem, West Bank, Sept. 2, 2022. - Ahmad Gharabli/AFP via Getty Images

A senior American official expressed concerns recently over the possibility that ultranationalist Itamar Ben Gvir would be appointed minister in the next government if opposition Leader Benjamin Netanyahu gets 61 mandates.

Ben Gvir, who heads the far-right Jewish Power party, had joined forces in August with Religious Zionism leader Bezalel Smotrich. The two parties will run on one ticket at the Nov. 1 elections. Both men are taking off in the public opinion surveys. Ben Gvir in particular enjoys growing popularity among young and ultra-Orthodox voters.

Israel Hayom newspaper quoted Sept. 29 an unnamed Biden administration official saying that should Netanyahu win the elections, and should he appoint Ben Gvir as minister in his Cabinet, "it would be a huge problem for us."

The report also quoted an unnamed Jewish American leader saying that an appointment of Ben Gvir would make it very hard on US Jewry to defend Israel. “In US terms, it is like the Ku Klux Klan in the Israeli government,” he noted.

According to an Axios report, the chairman of the Senate Foreign Affairs Committee, Democratic Sen. Robert Menendez, warned Netanyahu that the inclusion of Ben Gvir in a future Cabinet would have negative ramifications on US-Israel relations, significantly eroding Israel’s bipartisan support in Washington.

These reports have not only failed to deter Ben Gvir, he has marshaled them for his campaign. Instead of defending himself, he announced this week that he appointed a spokesperson for the foreign press, and noted that he directed him to start booking interviews and setting up meetings with diplomats serving in Israel in order to present his views.

Ben Gvir is both a headache and the soft underbelly for Netanyahu. Most of his rivals’ campaigns warn of a Netanyahu-Ben Gvir government that would augur a dark regime for Israel.

This is an effective weapon since, for many Israelis in the center-left, Ben Gvir was part of the incitement campaign that led to Prime Minister Yitzhak Rabin’s assassination in 1995. A few weeks only before the assassination, Ben Gvir appeared on television brandishing a Cadillac emblem that had been broken off of the hood of Rabin’s official car, declaring, “We got to his car, and we’ll get to him too.” The incident has trailed him for years, as has his past support of ultranationalist Rabbi Meir Kahane.

Netanyahu has made sure, until recently, to keep his distance from Ben Gvir. Although he was the mediator of Ben Gvir’s alliance with Smotrich, Netanyahu made sure never to be photographed with him. But the political circumstances dictate that without Ben Gvir and Smotrich, Netanyahu wouldn’t have the necessary majority for a government.

In fact, in just a few months Ben Gvir has become a popular politician, and has succeeded, through some brilliant media plays, to somewhat soften his extremist image. He is considered one of the politicians most in demand for school appearances, and he gets acclaim almost anywhere he goes. His messages are catchy and sharp, such as capital punishment for terrorists.

As a media whiz, Ben Gvir turns nearly every attack or move against him into an advantage. For instance, facing calls not to allow him to appear at schools, he whips out the weapon of free speech.

Similarly, Ben Gvir spun the abovementioned attacks against him by American officials to his benefit, claiming these attacks came at the request of Prime Minister Yair Lapid in an orchestrated campaign against him.