A satire show broadcast on Sweden’s state TV has cast clouds over a new round of Turkey-Sweden talks on NATO’s Nordic enlargement. 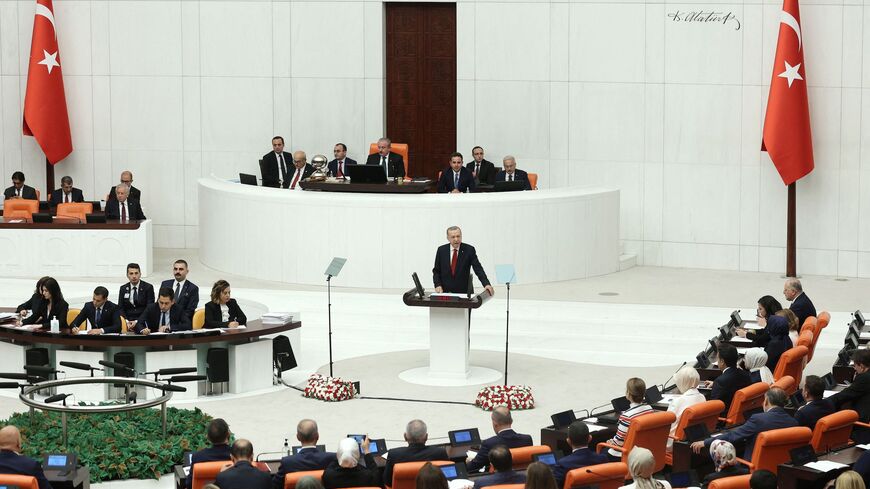 Turkish President Recep Tayyip Erdogan addresses the parliament to mark the opening of the new legislative year, at the Grand National Assembly of Turkey in Ankara, on Oct. 1, 2022. Erdogan on Oct. 1, 2022, warned Turkey would not ratify the NATO membership bids of Sweden and Finland until the two Nordic countries "kept" promises they had made to Ankara. - ADEM ALTAN/AFP via Getty Images

The talks between Turkey and Sweden over Stockholm’s bid to join NATO appear to have yielded little signs of progress as Ankara summoned the Swedish ambassador in Ankara over “disgraceful” comments about the Turkish president on Swedish state TV.

The ambassador was told that “insolent and disgraceful comments and images” aired on Swedish SVT television were “unacceptable.”

The rebuke coincided with a Swedish delegation visit to Turkey today to discuss the demands Ankara tabled in return for supporting the Nordic country’s accession to NATO.

The Turkish Justice Ministry, which hosted the talks, said it has requested the extradition of people whom Ankara wants over their alleged links to “terrorist groups.” The extraditions that were previously rejected by the Swedish authorities have also been renewed, the ministry added in a statement.

The ministry has stopped short of releasing the total number of requests but cited the names of seven people who are wanted over their links with Fethullah Gulen, a US-based Sunni preacher whom Ankara accuses of masterminding the 2016 coup attempt.

Sweden and Finland have abandoned their historical neutrality policy and officially applied to join NATO on the heels of the Russian invasion of Ukraine.

Turkey and Hungary are the sole remaining countries among the 30 members that have yet to ratify the enlargement of the transatlantic alliance.

Ankara has asked both Nordic countries to address its national security concerns in return for Turkey's support for their accessions. But as Al-Monitor reported in May, Ankara’s real beef is with Sweden, home to many Turkish dissidents.

Turkey’s demands include the lifting of de-facto arms embargoes and several extraditions. Speaking at a NATO summit in July, Erdogan said his country wants as many as 73 people from both countries.

Stockholm lifted the arms embargo last week. But it's acquiescence to the extradition demands seems like a dim prospect, as Sweden, one of the flagships of democracy, defines “terrorism” strikingly narrower than Turkey does.

Nevertheless, Ankara has notably dialed down its rhetoric on the matter recently. Erdogan, who several times threatened to delay the enlargement unless both countries meet his country’s demands, has maintained his silence over the past weeks.

Turkish parliament returned from summer recess on Oct. 1, and parliament is expected to be in session for only a few months before going on another recess for campaigning ahead of elections, which are expected to be held in June 2023.

A Turkish ratification before the recess might accelerate Ankara’s bid to acquire new F-16s and modernization kits from the United States at a time when Turkey’s territorial conflicts with Greece and Cyprus have further strained ties between Ankara and Washington. US President Joe Biden previously pledged his support to secure congressional approval for the sale, but the process seems to be progressing at a rather slow pace.