Ahead of the COP27 climate summit in Egypt next month, the Israeli government is focused on reducing greenhouse emissions within the industrial sector. 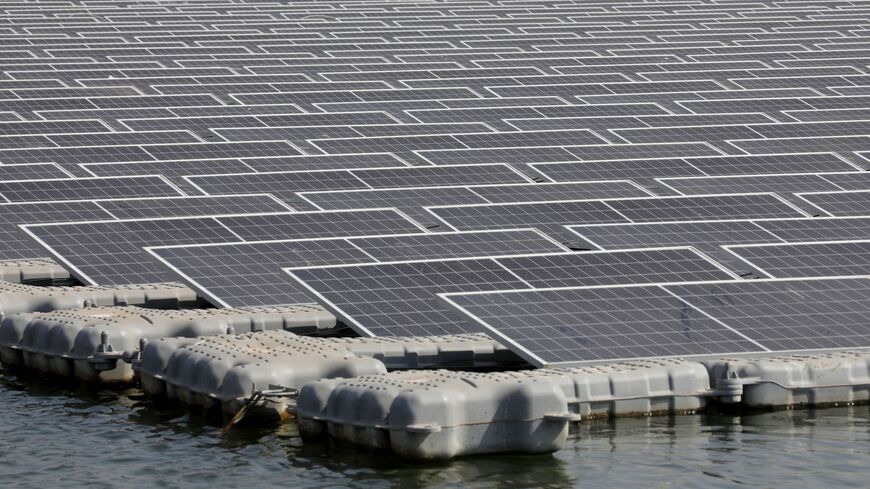 Solar panels are pictured on the surface of a water reservoir in the Israel-annexed Golan Heights on the the border with Syria on Sept. 4, 2022. - JALAA MAREY/AFP via Getty Images

Israel is in high gear preparing for the COP27 climate summit that will take place in Egypt's Sharm al-Sheikh next month. The current government has made battling climate change one of its main priorities, though environmental organizations say that Israel is still far from fulfilling its commitments on reducing greenhouse gas emissions.

As part of these efforts, the Ministry of Environmental Protection published a report Sept. 28 that examined the technical and economic feasibilities of replacing petroleum distillates (fuel oil and LPG) with cleaner and more efficient technologies in industry.

The report also formulated an action plan to accelerate the transition of factories to clean technologies with a budget of 100 million shekels ($29 million). The plan is part of Israel’s national climate strategy presented to the government in July 2018 to significantly reduce emissions during the current decade and reach a zero-emissions economy by 2050.

According to the report, industry is a major player, responsible for about 16% of total greenhouse gas emissions in Israel. The plan focuses on technological and economic alternatives to the use of fossil fuels in factories.

The action plan shows that today, there are various available technological and clean solutions and half of them are actually preferable from an economic aspect. It recommends, among other things, setting up a grant program encouraging the production of green hydrogen (generated by renewable energies) and yellow hydrogen (produced through electrolysis using solar power) a sites close to energy-consuming factories.

The plan also recommends providing grants to purchase systems for treating organic wastewater anaerobically and utilizing the biogas created in the process as a source of energy.

Yoni Sappir, chair of Israel Home Guardians, a nongovernmental organization seeking cleaner energy production and enforcement, told Al-Monitor, "This is a necessary program and an important step in the right direction." He said that for years, programs to reduce emissions concentrated on efficiency in electricity and in transportation, but "forgot" industry.

The plan's chances for success are unclear as it requires cooperation from the sector. Sappir acknowledged industrialists' claims that they were not sufficiently involved in the process of preparing the plan. Therefore, "what is needed now is an in-depth dialogue with industrialists to get them behind this program while benefiting from their experience in the field."

In 2020, 10% of Israel's electricity was supposed to be generated from renewable sources, and the government has set targets of 20% in 2025 and 30% in 2030. According to the Electricity Authority, in 2020, renewables generated only 7% of the total electricity consumed. With this news, environmental groups fear that the 2025 target will not be reached.

An April 2022 report issued by the Knesset's Research and Information Department indicates that the Israeli government has failed to publish comprehensive policy documents or multi-year work plans for the production of electricity from renewables.

Sappir is not surprised. He said that the lack of a comprehensive policy is the result of two problems: setting low goals and deficient implementation due to a lack of synergy between the various government agencies. Still, he hopes that external players such as the European Union, the United States and the international community will encourage Israel to act faster to meet its emissions goals.