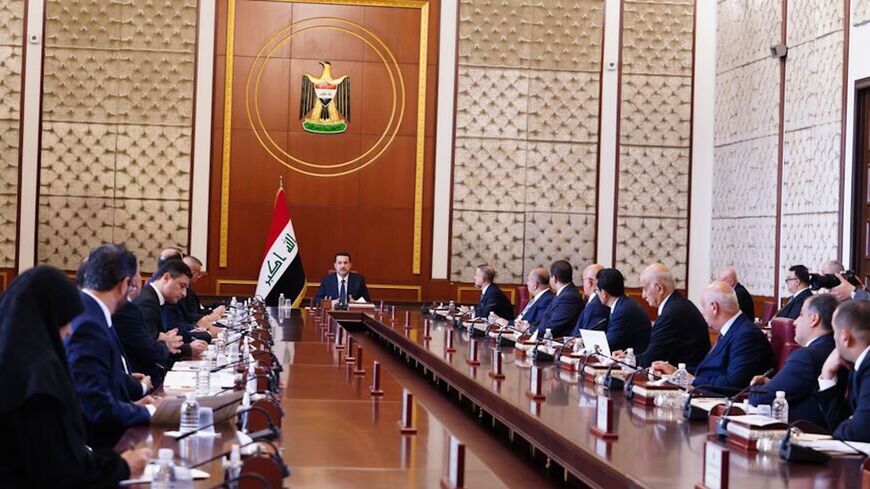 BAGHDAD — Iraq's new government under Prime Minister Mohammad Shia al-Sudani is likely to be on better terms with Iran than the previous government.

The Coordination Framework, the coalition which brought Sudani to office last week, and which consists of Iran-backed groups and paramilitary factions, was able to form the government after Shiite cleric Muqtada al-Sadr — an Iraqi nationalist who has long been critical of Iran — withdrew his bloc from parliament this past June.

Sadr, who won the largest number of seats in last year’s elections, was unable to form a government after over one-third of lawmakers boycotted sessions to select the president. Since choosing the president precedes the selection of a prime minister and requires two-thirds of lawmakers to be present for the vote, the so-called "blocking third" stalled the government's formation.

During the deadlock, Iran was supporting the Coordination Framework to be part of the government and pushing Sadr to include them in any potential Cabinet.

Yet Sadr’s exit from parliament opened the path for the Coordination Framework, the next biggest winner in the elections, to form a government, giving Iran and its allies in Iraq an exceptional opportunity to see a government in Baghdad without Sadr.

Iranian authorities have not hidden their satisfaction with the new government under the leadership of Sudani. Commander-in-Chief of the Islamic Revolutionary Guard Corps Hossein Salami, speaking at a funeral for victims of last week's terrorist attack in Shiraz, spoke about the numerous failures of the United States in the region, including the inability of the government formation project in Iraq, praising Iran’s role in forming the new government.

Tehran’s Ambassador to Baghdad Mohammad Kazem Ale-Sadegh was also quick to pay a visit to Sudani on Oct. 30, expressing Iran’s support for him and his government. Ale-Sadegh conveyed the Iranian leadership’s congratulations to Sudani, saying that Tehran hoped to enhance the relationship between the two countries.

Sudani was the preferred candidate for prime minister of pro-Iran groups in Iraq and the Popular Mobilization Units (PMU) in particular. He is a confidant of former prime ministers Nouri al-Maliki and Haidar al-Abadi, having helmed several ministries under their governments.

The new cabinet also includes several members of the PMU as well as figures close to them and supported by them. This includes the new Minister of Higher Education Naim Al-Aboudi, who was previously the official spokesman of Asa'ib Ahl al-Haq, and Minister of Labor and Social Affairs Ahmad Al-Asadi, who was a former official spokesman for the PMU.

Moreover, newly elected President Abdul Latif Rashid was the Patriotic Union of Kurdistan's candidate for this position, and the PUK maintains a close relationship with the Iranian government.

Therefore, it appears the new government will have a greater desire to boost relations with Iran — unlike the previous government, which leaned more toward international interactions and connections with Arab neighbors such as Jordan, Egypt and Saudi Arabia.

This direction was evident in the recent meeting between Sudani and Ale-Sadeq, who both emphasized the importance of cooperation and coordination between Iraq and Iran in order to promote sustainable development in the interest of the two friendly nations and for all the people of the region. They also examined bilateral relations of the two neighboring countries and the development of mutual cooperation at different levels and fields.

It is expected that Iran will push to finalize the railway connection between the two countries, which would give Iran a chance to reach the Mediterranean Sea through Iraq and then Syria (a close ally of Iran). Tehran could also push Baghdad to remain dependent on it to produce electricity instead of the diversification of energy resources that the previous government was working on, such as focusing on the electricity grid connection with the Gulf states, Saudi Arabia, Jordan and Egypt.

It seems that the US government is showing more tolerance for this direction due to the current energy crisis in the West. Prior to becoming prime minister, Sudani emphasized in an interview with The Wall Street Journal that he would not go along with OPEC+ in reducing oil production. He stated that Iraq needs more production to recover its damaged economy.

At their 33rd meeting in Vienna, OPEC+ agreed to cut production by 2 million barrels per day, which the United States fears will lead to higher global energy prices and help Russia finance its war in Ukraine.

If Iraq moves toward increasing oil production, this could reduce the negative impact of the recent OPEC+ decision.

Also, a more pro-Iran government in Iraq could open space for Iranian oil smuggling and other ways of circumventing sanctions through Iraq, as was happening before the Kadhimi government, which was able to reduce it. This would ultimately provide more oil and work to support to Western energy demands.