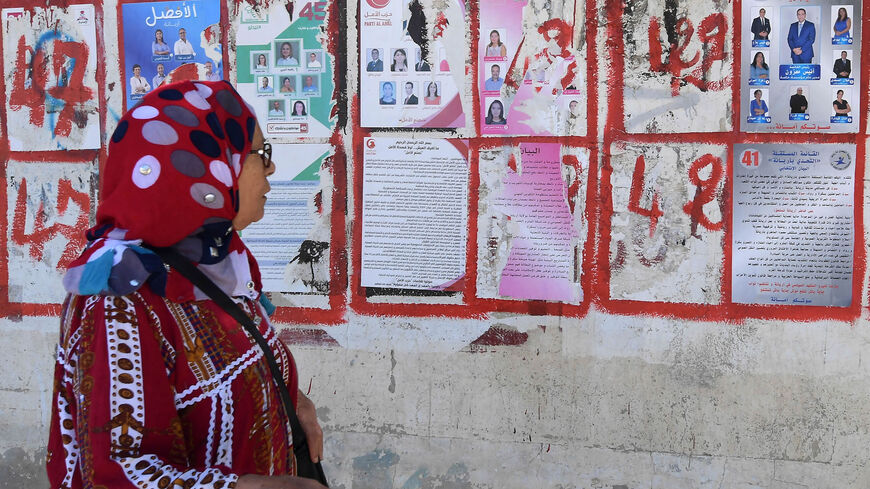 A Tunisian woman looks at posters of candidates for the legislative elections, Tunis, Tunisia, Oct. 4, 2019. - Fethi Belaid/AFP via Getty Images

Feminists, politicians and activists decry the Tunisian president’s new electoral law and system, saying it is anti-democratic and undermines the advances made in recent years for women and youth.

Among the growing wave of demonstrations against President Kais Saied’s recent draft electoral law is a coalition of 12 women’s and civil society groups, which last week denounced the electoral law that allows only individual candidates to be elected. They say the new system marginalizes women in political life, rolling back the gains women have made not just since the 2011 revolution, but since the establishment of the republic in 1956.

The coalition calling itself Feminist Dynamism demonstrated in front of the Higher Electoral Authority in Tunis Oct. 7 to decry not only the new electoral system as disadvantaging female candidates, but also the appointment of an election commission to manage the elections. In a Facebook statement Oct. 6, they said, "[The election commission] is not representative of all segments of the Tunisian society as its structure is dominated by men, and seeks to exclude women from the entire electoral process."

Feminist Dynamism stated that not only will the new election decree Law 55 “undermine their right to participate in political life and manage public affairs,” flaws in the new system would open the door to corruption such as nomination buying that will further marginalize women and youth.

Under Law 55, candidates gained 400 nominations by registered voters. Those wishing to nominate a candidate will have to wait in line at the local municipality and pay a nominal administration fee to register their signature.

Previously, parliamentary elections were run on a proportional representation system based on electoral lists, and checks and balances were installed with the goal of 50% representation of women and 25% of youth. However, Saied's new law currently has no such built-in mechanisms to ensure gender and youth parity. This is in conflict with Article 1 of Saied’s own constitution that ensures the acquired rights of women be protected by the state.

Former member of parliament and feminist activist Bouchra Belhadja, who supports the statements of Feminist Dynamism, told Al-Monitor, “The whole process is individual and anti-democratic and it is there just to reinforce the president.”

Belhadja is highly critical of the largely silent international community’s position on Saied’s new presidential system, which she said "gives women a smaller chance to be nominated." She added, "You cannot make a parliament without women," and noted she fears that “only women who [Saied] approves of will stand a chance of being elected to parliament.”

Feminist Dynamism has launched an online petition calling for an amendment of the electoral law that is part of a wave of growing dissent and disapproval over the upcoming legislative elections, while press and media unions have also demonstrated threatening a media boycott of the election.

Oct.15 saw the National Salvation Front hold their largest demonstration against Saied's regime, food shortages and the upcoming election. Police tried to stop them reaching the central avenue and they have threatened legal action against the police. Alongside this was a small demonstration by the Free Destourian Party led by Abir Moussi, they suffered much greater police violence, with 15 people injured, seven of whom were taken to hospital.