US lets firms expand internet services in Iran amid blackout

The American move to support internet freedom in Iran comes as protests continue over the death of Mahsa Amini. 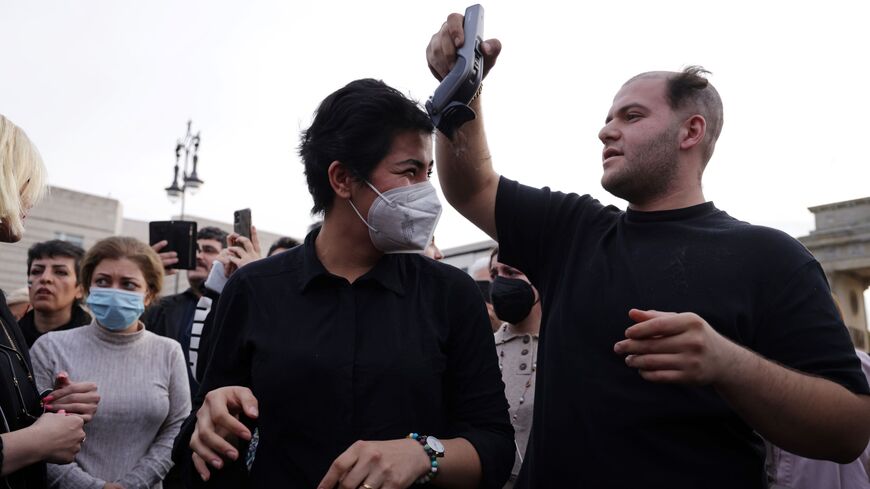 Male and female protesters cut each other's hair as an act of solidarity with women in Iran during a demonstration against the death of Mahsa Amini on Sept. 23, 2022 in Berlin, Germany. Amini, 22, was arrested by Iranian authorities in Tehran on Sept. 13 for not wearing her headscarf properly and died three days afterwards. - Sean Gallup/Getty Images

The US Treasury Department on Friday issued a license authorizing American firms to provide additional internet services in Iran without risking sanctions, a move aimed at countering government censorship of protests over the death of a young Iranian woman in custody.

“The expanded authorization will allow US companies to provide tools to ordinary Iranians and assist in their efforts to resist repressive internet censorship and surveillance tools deployed by the Iranian government,” a senior Treasury Department official briefing reporters said.

Protests erupted over the weekend following the death last Friday of Mahsa Amini, a 22-year-old woman who was detained three days earlier by Iran’s morality police for allegedly wearing a hijab improperly.

Women in dozens of cities across Iran are risking arrest by burning their hijabs and cutting their hair in a show of defiance. Iranian state television reported at least 26 people had been killed in the protests, including members of the police and Basij paramilitary forces.

Nearly all internet data on mobile phones was disconnected on Thursday, and home broadband was severely disrupted in most of the main protest cities. By Friday, the internet monitoring group NetBlocks said Iran was experiencing its most severe internet restrictions since the protests of November 2019.

The hard-line Iranian news agency Tasnim said the internet disruptions were meant to prevent “communication and coordination among leaders of the riots.”

“It is clear that the Iranian government is afraid of its own people,” Secretary of State Antony Blinken said in a statement on Friday. “Mahsa Amini is senselessly, tragically dead, and now the government is violently suppressing peaceful protesters rightly angry about her loss.”

“In the face of these steps, we are going to help make sure the Iranian people are not kept isolated and in the dark,” Blinken said.

Shortly after the US announcement, Tesla CEO Elon Musk tweeted Friday that he was “activating Starlink,” his satellite internet firm.

Earlier on Friday, the Treasury official told reporters that Starlink would not be covered by the new general license and that the firm would need write to the department for clearance to operate in Iran.