The sanctions come less than a week after Mahsa Amini's death in custody of the morality police. 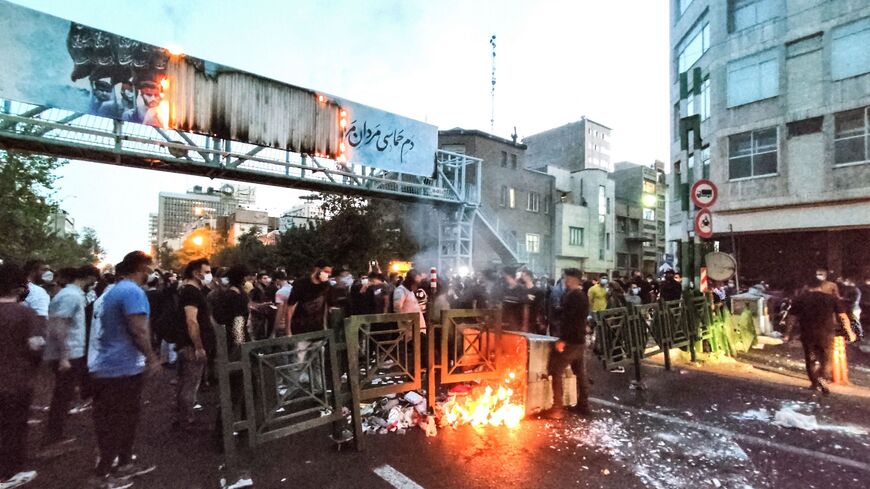 A picture obtained by AFP outside Iran on Sept. 21, 2022, shows Iranian demonstrators burning a rubbish bin in the capital Tehran during a protest for Mahsa Amini, days after she died in police custody. - AFP via Getty Images

The Treasury Department accused the morality police, the Iranian law enforcement unit that enforces the conservative dress code, of “abuse and violence against Iranian women and the violation of the rights of peaceful Iranian protesters.”

The department’s announcement cited Mahsa Amini, who died Friday in northern Tehran after she was detained three days earlier by Iran’s morality police for allegedly wearing a hijab improperly.

Witnesses say she was beaten in police custody. Iranian authorities claim she died of a heart attack, but her family says she had no health conditions before her arrest.

Ahead of his trip to New York City for the UN General Assembly this week, Iranian President Ebrahim Raisi spoke to Amini’s family and said the authorities would investigate the cause of her death. On Tuesday, a top United Nations official called for an independent investigation.

In a statement on Thursday, Secretary of the Treasury Janet Yellen called Amini "a courageous woman whose death in morality police custody was yet another act of brutality by the Iranian regime’s security forces against its own people."

“We condemn this unconscionable act in the strongest terms and call on the Iranian government to end its violence against women and its ongoing violent crackdown on free expression and assembly,” Yellen said.

The United States on Thursday also imposed sanctions on seven senior leaders of Iran’s security organizations accused of routinely using violence to suppress peaceful protesters, political dissidents, women’s rights activists and members of the Baha’i community. Those blacklisted include the intelligence minister and the commander of the Iranian army's ground forces.

Speaking to reporters Thursday about the sanctions, a senior State Department official said to expect “more steps” in the coming days, including from partner countries.

Protests over Amini’s death have spread to dozens of cities across Iran, where women are risking arrest by burning their hijabs and cutting their hair in a show of defiance. State television reported at least 26 people had been killed in the protests, including members of the police and Basij paramilitary forces.

In a press conference in New York City on Thursday, Raisi claimed his government was “safeguarding the rights of every citizen” in Iran. He went on to accuse the United States of double standards on human rights.