The Israel Antiquities Authority discovered ruins of ancient mosques and rural properties dating back about 1,200 years, which sheds light on the area’s transition from Christianity to Islam during that era. 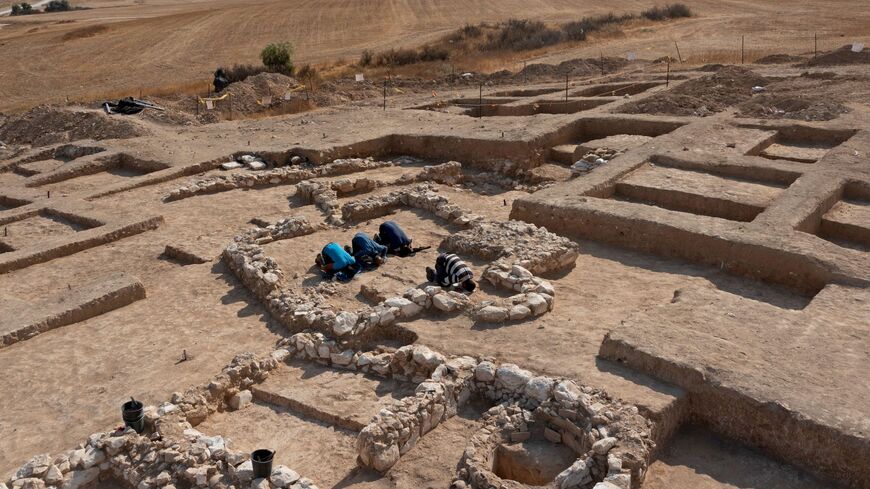 Muslim Palestinian workers of Israel's Antiquities Authority pray amid the remains of a recently discovered ancient mosque, which dates back to the early Islamic period, in the Bedouin town of Rahat in Israel's southern Negev desert on June 22, 2022. - MENAHEM KAHANA/AFP via Getty Images

In June, the Israel Antiquities Authority unearthed an ancient mosque dating back 1,200 years in the Bedouin city of Rahat in the Negev desert in southern Israel.

Back in 2019, the authority uncovered another mosque dating back to the seventh and eighth centuries AD.

In a June 8 statement, the authority explained that both the previous and new discoveries of mosques suggest that the area made a transition from Christianity to Islam, adding that the first relics found were marble columns belonging to churches.

The authority stated that the excavation works will continue and the mosques will be restored and preserved as historical monuments.

Yasser al-Amour, who has worked at the Israel Antiquities Authority for 28 years, was among the first people to unveil the discoveries of the mosques in the Negev.

“I was truly overwhelmed when we found the two mosques. I even called my Muslim colleagues to prayer. An indescribable feeling took over me. These two mosques are among the oldest in the world and evidence of the presence of Islam for more than 1,200 years,” he told Al-Monitor.

“Of course, there are other mosques in the area, but these two will turn Rahat into a tourist area,” he added.

Amour explained that “the population of Rahat is about 75,000 people, all of whom are Muslim Bedouins and most of whom took part in this great exploration. This archaeological site will bring economic benefits to the city’s residents.”

“The municipality of Rahat demanded [of the Israel Antiquities Authority] that a new mosque be built next to the newly discovered ones in a bid to attract visitors and tourists to the area. The municipality also called on the Israeli Ministry of Antiquities to preserve and renovate these discoveries, which are a source of pride for us, as Muslims, and for the city of Rahat,” he added.

“The two mosques actually mark the end of the Umayyad era and the beginning of the Abbasid Caliphate, i.e., the advent of Islam in the year 636 AD,” he explained.

Amour said that these “great discoveries took place during construction works to expand the city and build new housing units for the residents. We actually discovered four archaeological sites, including these two mosques.”

“The site is really ancient, dating back more than 1,000 years, and the mosques are unique and sacred and are as significant as Al-Aqsa Mosque in Jerusalem. Although there are many well-known mosques inside Jerusalem, it is rare to find a place of worship that is that ancient,” Amour added.

Archaeologists at the Israeli Ministry of Antiquities began excavation works in the city of Rahat in January. They discovered several sites and monuments dating back to the period between the Byzantine era and the modern Islamic era.

These archaeological sites, which include churches and mosques, are further proof that the region was under the yoke of the Christian Byzantine rule for hundreds of years before the emergence of Islam, thus the presence of mosques.

Mansour al-Nasasira, a lecturer in international relations at Ben-Gurion University in Beersheba, told Al-Monitor, “These discoveries date back to the seventh and eighth centuries AD, which was during the Umayyad caliphate. This period of time witnessed many conquests — and Beersheba, one of the Negev desert’s cities in which excavations were carried out, was anciently the headquarters of the Islamic leader Amr Ibn al-Aas.”

“The area was inhabited by Muslims during that time. The new discovery did not come as a surprise to us, as many foreign missions had visited different areas in Palestine, including the Negev desert, and unearthed significant archaeological monuments dating back to the Islamic period,” he added.

Nasasira explained that “these [discoveries] of mosques, agricultural villages and the ancient soap factory [in 2020] are evidence that the area was an extremely important agricultural area during that period, which refutes the Israeli narrative claiming that the Negev desert had not been inhabited and does not have any relics or antiquities.”

Omar Zaidan, an antiquities inspector in Acre in Israel who took part in the excavation and exploration works in Rahat, told Al-Monitor, “We found many peasant houses that date back to the Umayyad era, which consisted of a room and a kitchen with pottery and ovens. But the mosques that date back more than 1,200 years were the highlight of our discoveries.”

“Every hill in the site where we carried out our excavation works revealed to us houses and relics dating back to that period of time. Excavations are ongoing, which means that we will have new information to fill the gaps regarding the Umayyad period in the area,” he added.

Despite the paramount significance of the discovery, it was not spared the political bickering between the Palestinian archaeologists and the official Israeli authorities.

In fact, the discovered mosques confirm that since ancient times, the Palestinians inhabited the Negev and built their houses of worship and cultivated lands, which is in conflict with Israeli claims that the Bedouins have no history in Palestine.

Kayed Abu Latif, a resident of Rahat, told Al-Monitor, “These discoveries created controversy in the area because it had been said that Bedouins were invaders and not indigenous population, and that the Negev desert was not inhabited and did not have any archaeological landmarks.”

“But now, with these discoveries, the official narrative has changed. The Negev desert is a very strategic location linking the Gaza Strip, the West Bank, Jordan and Egypt. And now, it has also become an important archeological area,” he added.

The Israeli Ministry of Antiquities also uncovered Aug. 23 a desert mansion that dates back more than 1,200 years.

The ministry said that it had begun studying construction methods and architectural styles to learn about daily life in the Negev desert at the beginning of Islamic rule.