Tension has been mounting between the political leaders of Hamas and the Islamic Jihad over the Palestinian deaths caused by the latter’s rockets during the recent round of fighting with Israel. 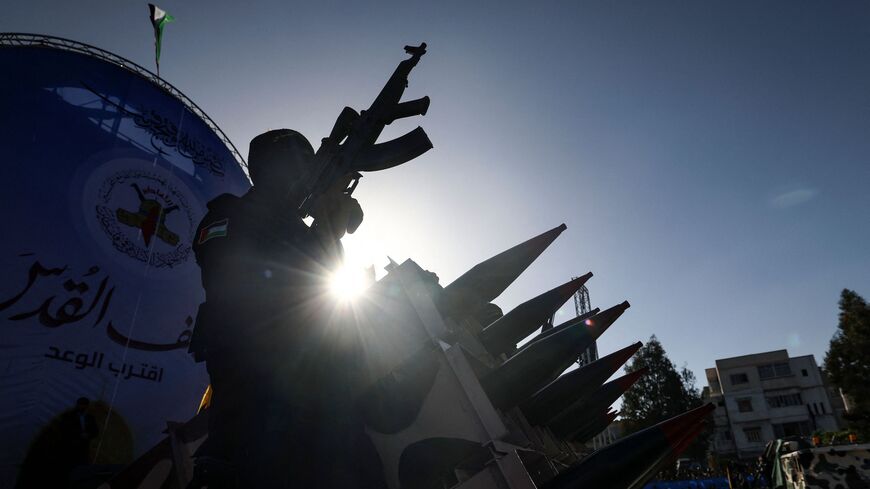 Fighters with the Saraya al-Quds Brigades, the armed wing of the Palestinian Islamic Jihad movement, parade with their weapons in the streets of Gaza City during a rally on May 29, 2021. - MAHMUD HAMS/AFP via Getty Images

A correspondent in Gaza
September 4, 2022

GAZA CITY, Gaza Strip — Tension has been mounting between Hamas’ political leaders and Palestinian Islamic Jihad over the deaths caused by the latter's rockets during the recent military confrontation with Israel in the Gaza Strip.

The confrontation started on Aug. 5 and ended on Aug. 7 with an Egyptian-sponsored cease-fire agreement.

Hamas and Islamic Jihad held a meeting on Aug. 22 in Gaza City. The two movements said in a joint statement after the meeting, “The resistance shall continue with high coordination between the two movements and all the factions.”

However, according to exclusive information obtained by Al-Monitor from several leading figures who attended this meeting, tension was high at the meeting, where Hamas called on Islamic Jihad to financially compensate the families of the civilian victims who were killed by its rockets that fell inside the Gaza Strip.

The sources said that Islamic Jihad denied that any of its rockets fell inside Gaza and rejected any responsibility in this regard.

The recent confrontation killed 49 Palestinians, including 17 children and four women, according to an Aug. 12 report by the Ministry of Health in Gaza.

Another Hamas leader confirmed to Al-Monitor on condition of anonymity that his movement called on Islamic Jihad to financially compensate the families of the victims after Hamas, which has ruled the Gaza Strip since 2007, investigated allegations that local rockets had landed in Palestinian areas and killed Palestinians.

The leader explained that the investigation team, consisting of members of the Gaza ministries of interior and health, collected evidence indicating that Palestinians were killed by locally made rockets. “The investigation team got their hands on rocket shrapnel and local missiles that fell in residential neighborhoods,” he added.

He refused to comment on the number of Palestinian civilians killed by local missiles.

The Israeli Public Broadcasting Corporation cited an Aug. 25 Israeli army statement as saying that 180 rockets fired by Islamic Jihad during the recent escalation landed inside Gaza and killed more than 16 Palestinian civilians.

The army statement detailed five failed Islamic Jihad rocket launches including one that landed near the Imad Aqel Mosque in the middle of the Jabalia refugee camp in the northern Gaza Strip and killed seven Palestinian civilians.

Islamic Jihad denied the Israeli army’s statement. The group’s spokesperson Daoud Shehab said in a statement to the Anadolu Agency on Aug. 25, “These are false allegations through which the Israeli army is trying to mislead the public. … These are blatant lies.”

Although there is clear evidence to support the Israeli allegations, Islamic Jihad's denial seems at least partially an effort to avoid paying financial compensation to the families of the victims, at a time when it is suffering from a stifling financial crisis. Its employees within its various media and movement institutions have been receiving half their salaries for years, leading many to resign.

An independent Palestinian political analyst told Al-Monitor on condition of anonymity, “Being the largest armed faction in Gaza, Hamas feels the people lost confidence in the choices of the resistance in the wake of the disappointing outcome of the recent confrontation round, in which Palestinians were killed by local rockets and no Palestinian gains were achieved.”

He explained that this lack of confidence has made Hamas rush to investigate the fighting and examine the issue of compensation to the families of victims.

On Aug. 25, Islamic Jihad organized several simultaneous events in honor of the victims in Gaza City, Damascus, Beirut and in the Jenin refugee camp in the northern West Bank.

Hassan Abdo, a political analyst with sources in Islamic Jihad, told Al-Monitor the events sent “a message of defiance to Israel, which is trying to undermine the confidence of the Palestinians in the resistance and Islamic Jihad.”

Abdo explained that Israel, “which failed to confront the resistance’s missiles and prevent them from falling within its territory, is now seeking to strike the resistance supporters and to sow discord among the Palestinians who believe in the option of armed resistance.”

This mounting tension between Hamas and Islamic Jihad threatens to lead to a rift, though the leaders of both sides still emphasize in their media statements the need for their movements to remain unified and coordinated in the face of Israeli threats.