Many Gazans are asking where the Islamic Jihad movement's responsibility lies for the recent fighting. 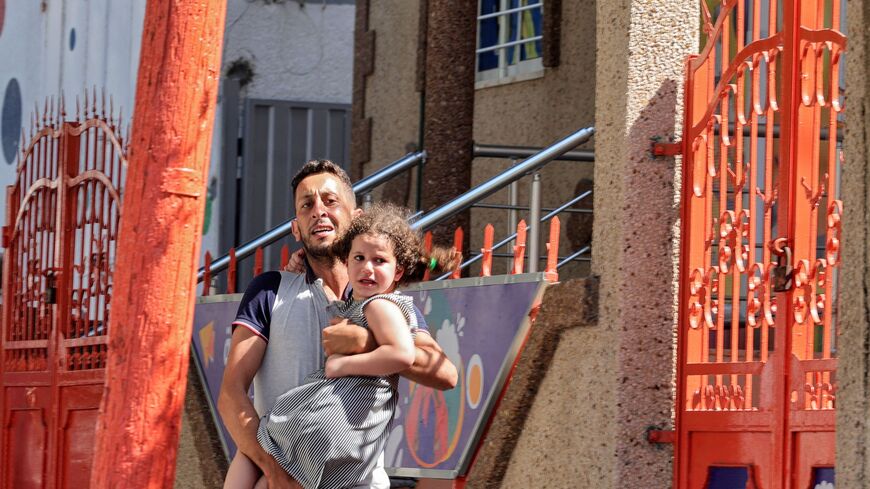 A Palestinian man carrying his daughter evacuates their home during an Israeli airstrike in Gaza City, on Aug. 7, 2022. - MOHAMMED ABED/AFP via Getty Images

Gaza — On second day of the recent round of fighting in Gaza, as the sun set in the overcrowded Jabalia camp, the children played outside. They were not afraid of rocket fire, as they had long grown used to the ongoing military operations in Gaza. As the Palestinian Islamic Jihad (PIJ) movement launched rockets from an area near the Imad Aqel mosque, one missile veered off course and struck civilians in the crowded camp. It killed seven people, including four children, and injured 21, according to the Ministry of Health.

The incident, most of whose victims were children, angered many Gazans. Though they initially blamed Israel for the massacre, the Israeli army reported that five rockets fired toward Israel had fallen inside Gaza. The PIJ fired 1,100 rockets toward Israel, 200 of which fell inside Gaza, killing 15 civilians altogether.

While PIJ officials refused to talk to Al-Monitor, Al-Monitor’s team went to talk to the residents of the Jabalia camp, where a PIJ rocket fell. It found the street where the rocket had hit children was a small and crowded alleyway.

A resident of a nearby street told Al-Monitor on condition of anonymity, “On Saturday, the second day of the military operation, at 9 p.m., we were startled by the sound of a huge explosion hitting the next street. My brothers and I rushed to see what happened. I saw people trying to extinguish a fire with water as they waited for the civil defense and ambulance cars to arrive. I saw a 12-meter-long missile that exploded horizontally. I thanked God that it did not explode vertically. Otherwise, a very big massacre would have ensued.”

He lamented, “Everyone knows that the missile that fell on Saturday was a local missile, but no one dares talk about it, especially to the media and the press, let alone name names. Here, there is no freedom of opinion and expression. There is no respect for others’ points of view, and whoever holds the PIJ responsible for the missiles that veered off course is deemed unpatriotic and a partner in Israeli crimes against us. Whoever they are, they would be arrested by the authorities and investigated. This is why no one would dare talk about this.”

On the third day, Sunday, missiles struck a cemetery and killed five children there, sparked debate over their origin. Israel reported that the missiles were its own.

The man went on, “We are well aware of our struggle with Israel, and we are all for the Palestinian resistance, but we must stand up to this crime and demand an investigation, as this is not the first time that the rockets have fallen on civilians. During the four previous wars, a lot of rockets fell on fields and rooftops, even on people, killing them or seriously injuring them. In 2008, I lost my best friend in one of the explosions caused by resistance rockets, and in 2014 one of them fell on my aunt’s house and left her child totally disabled. But what is new this time around is that the PIJ movement alone responded without Hamas, and our society is very partisan, so many rushed to blame the PIJ.”

A journalist from the Gaza Strip told Al-Monitor, “I covered all the wars in the Gaza Strip, took a lot of photos and videos, and in every war I saw a number of local rockets falling on civilians. In the massacre in the Jabalia camp, I saw with my own eyes a local missile strike. We only want the truth and a clear investigation into the matter. They want us not to talk about this matter, because if we talk, they describe us as collaborators with the occupation. We condemn the occupation and its crimes against our people, but what is happening is a grave crime against civilians and children.”

The Israeli army shared photos and videos in which activists from Gaza documented the PIJ's rocket launches. Israeli radar also showed some rockets veering off course and landing inside Gaza with three landing in the Jabalia camp, in Beit Hanoun and in the Bureij refugee camp. However, PIJ and Hamas both held Israel fully responsible for the incident, asking journalists in the Gaza Strip not to circulate allegations about Palestinian missiles killing Palestinians.

The media office of the Hamas government issued a strongly worded statement to the correspondents of international newspapers that published coverage of the deaths due to local shelling, accusing them of adopting the narrative of the occupation.

Palestinians circulated the footage of the missile strikes, some of them commenting that the PIJ rockets were old and unusable. Some of them called for an urgent investigation, but others disagreed, claiming that Israeli agents must have either sabotaged the rockets so they exploded prematurely or used its new laser weapon to make the PIJ missiles explode over Gaza.

Farid al-Khatib, whose child was injured in this horrific incident, told Al-Monitor, “An explosion suddenly shook the camp. My child, who was playing with the neighbors’ children, was injured. We cannot tell whether the missile was Israeli or Arab. International and human rights workers have to visit Gaza and look into the matter because as citizens we can never tell for sure.”

According to Israeli evaluations, there is no comparison between the PIJ and Hamas’ ballistic capabilities. The vast majority of PIJ missiles are short-range rockets and mortar shells. Israel also claims that its Iron Dome defense systems intercepted 96% of the rockets during this round of fighting.

In a report by the Associated Press, Raji al-Sourani, director of the Al Mezan Center for Human Rights in Gaza, blamed Israel for the civilians killed. However, he conceded that some civilians were killed by local missiles, not by Israeli airstrikes. The Palestinian Center for Human Rights reported that 27 people were killed in Israeli airstrikes and put the full death toll including those from local rockets at 49. Sourani called for an investigation, asking for more eyewitnesses and videos to be brought forward.