The Takeaway: Iran's protesters shift to rooftops in response to crackdown 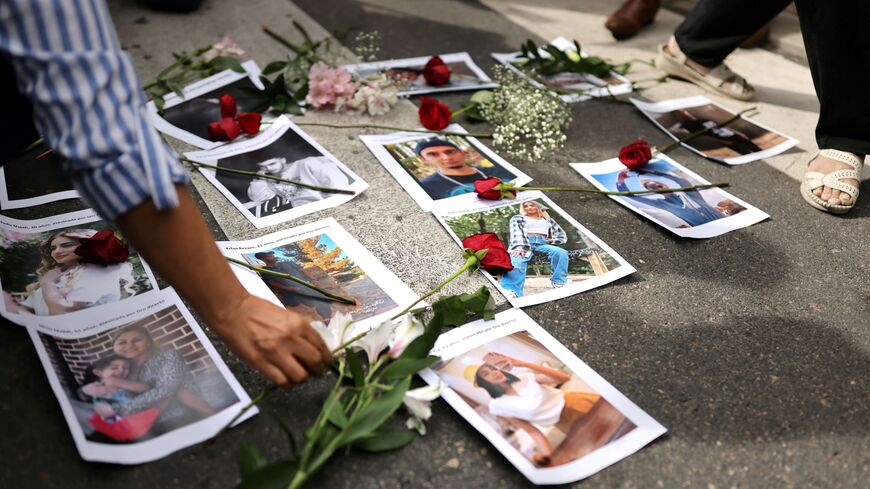 Demonstrators display flowers on pictures of victims during a protest in front of the Iranian embassy in Madrid, on Sept. 28, 2022, following the death of an Iranian woman after her arrest by the country's morality police in Tehran. - THOMAS COEX/AFP via Getty Images

Iranian protesters are beginning to shift tactics to adapt to a sweeping campaign of arrests and severe internet outages aimed at stifling their message.

For a firsthand account of anti-government protests that have raged for nearly two weeks, The Takeaway reached out to an Al-Monitor correspondent in Tehran, who says “life is hanging in the balance” amid the outpouring of public anger.

“Everyone is wondering what is happening next,” says the correspondent, whose name we are withholding out of security concerns. “Almost everyone can feel the tense air and the uncertainty … While mornings are normally quiet, tension gradually builds up as the evening draws close, which is when people get together in multiple locations.”

Protests that began over the Sept. 16 death of 22-year-old Mahsa Amini in police custody have morphed into something much bigger, our correspondent says. Compared to the protests of 2009 and 2019, “the key difference now is women's centrality and inclusiveness.”

The clampdown continues. Rights groups have documented an increasingly brutal crackdown on what the Iranian government labels “riots.” At least 76 people have been killed by direct gunfire from security forces, the Oslo-based Iran Human Rights reported. As of Wednesday, the government's official toll stood at 41 and included several police and paramilitary forces.

“The police and intelligence apparatus have gone the extra mile to scare the protesters away, and this has caused the size of the protests to dwindle compared to the first few days,” our correspondent says. “But that doesn’t mean they have died down or the anger has been eased — not at all.”

New forms of protest. People are also changing tactics as the crackdown intensifies, reports our correspondent. “People are taking to rooftops and windows at nights shouting slogans that target the very basis of the system.”

Teacher unions have announced strikes, and students are boycotting classes. On Wednesday, there were reports that drivers for Snapp, the widely used Iranian version of Uber, were going on strike.

“The protesters are thirsty for global solidarity,” our correspondent says. “What they want is meaningful support from politicians, something that goes beyond statements … In their view, Obama failed Iranians in the 2009 protests.”

Former president Barack Obama’s initial response to the election protests was muted, partially out of concern the United States would be seen as interfering in Iran’s domestic affairs.

“[The United States] wanted to interfere in our internal affairs,” Iran’s foreign minister, Hossein Amir-Abdollahian, told Al-Monitor in an interview Sunday. Of the clampdown, he said, one must “respond to riots in a powerful, mighty way."

As Iranians protest the death of a 22-year-old Kurdish woman in custody of Iran’s morality police, the Islamic Republic is ramping up its bombing campaign in the Kurdish region of neighboring Iraq. At least nine people were killed by Iranian drone and missile attacks Wednesday targeting the headquarters of three separate Iranian Kurdish opposition groups based in Iraqi Kurdistan. “The regime seems unnerved by the solidarity shown by non-Kurdish Iranians and opposition groups with the country’s Kurds because of Amini’s death,” Amberin Zaman reports. Kurds make up roughly a tenth of Iran’s population and have long been denied political and cultural rights.

Kyrgyzstan’s use of Turkish drones in a border dispute with Tajikistan has put Turkey in a tight spot as it seeks to balance ties in Central Asia. Fehim Tastekin writes that Kyrgyzstan's acquisition of Bayraktar TB2 drones has been a “game-changer” in its ongoing clashes with Tajikistan, which enjoyed a relative military edge for years. Experts say the drones sales risk hurting Turkey’s ties with Tajikistan and could make it harder to find a diplomatic settlement to the border dispute.

Business is booming for cosmetic centers in Syria’s capital city despite the collapse of the war-torn country’s health sector. An official at the Damascus Medical Association told Al-Monitor that medical students are increasingly choosing plastic surgery as their area of concentration and that the number of doctors specializing in cancer is dwindling. Essam Sabry Hafez spoke to one doctor in Damascus who sees as many as 50 clients per day for Botox, fillers and other procedures. Most have relatives in Europe or the Gulf covering the surgery costs for them, he says.

As Egypt gears up to host the United Nations climate change conference in November, its Ministry of Environment is seeking to restore coral reefs in the Red Sea that have been damaged by human activity. A newly announced project will establish around 100 coral nurseries near Hurghada, which will then be planted in parts of the reef damaged by human activities and climate change. The Red Sea hosts one of the longest continuous living reefs in the world, but it’s been degraded by pollution, urban developments along the coast and fishing activities. As Marc Espanol reports, one of the biggest threats to the coral reefs is Egypt’s Red Sea tourism.

When Israel Prime Minister Yair Lapid used his UN General Assembly speech to announce his support for a two-state solution, the target audience was a domestic one. Mazal Mualem writes that the move was aimed at drawing voters away from Defense Minister Benny Gantz ahead of the November election. “The center-left voter base believes in the two-stage idea and Lapid, who had once winked to the right, has adopted the central idea of this camp,” she writes.

ICYMI: For this week’s episode of “On the Middle East,” Amberin Zaman interviews Asso Hassan Zadeh, who long served in the Iranian Kurdish opposition. Zadeh says non-Kurdish Iranian opponents of the regime are taking greater interest in their Kurdish counterparts and seeking to join forces with them.