The inclusion of Iran's top nuclear negotiator in the delegation, however, could provide opportunities for Iran and other countries to exchange ideas 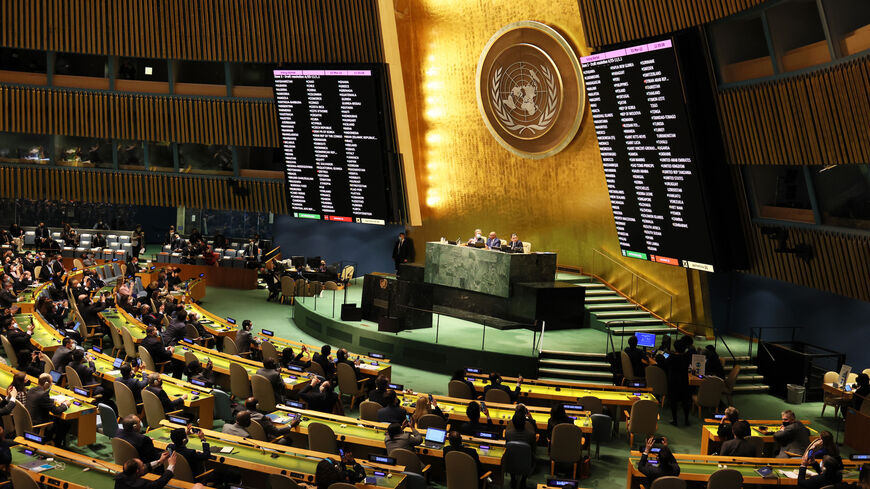 Members of the United Nations General Assembly vote on a resolution during a special session at the UN headquarters on March 2, 2022, in New York City. - Michael M. Santiago/Getty Images

Iran’s President Ebrahim Raisi has headed to New York to attend the 77th session of the UN General Assembly, his first such meeting as president. Raisi will be accompanied by members of his cabinet and according to Iranian press reports, the delegation plans to meet with other heads of state. He is also slated to address the UN General Assembly.

The trip comes as Iran is rocked by protests over the death of Mahsa Amini, a 22-year-old woman who died while in police custody after being apprehended by the hijab police. There has been widespread anger in the streets and social media over her death and the increasingly unpopular hijab laws. Iranian social media has been flooded with videos of police clashing with protesters.

Before Raisi left for New York, he met with Supreme Leader Ayatollah Ali Khamenei after Raisi visited Uzbekistan for a meeting of the Shanghai Cooperation Organization. During Raisi’s visit to Uzbekistan, Iran signed a memorandum of understanding to become the organization's ninth full member. According to the Iranian press, Raisi and Khamenei discussed the former’s upcoming trip to New York and Khamenei “wished him success.”

The nuclear negotiations are reportedly not on the agenda for Iran during Raisi’s trip to New York. When asked by Iranian journalists about the inclusion of nuclear negotiator Ali Bagheri Kani on Raisi’s delegation, Foreign Ministry spokesperson Nasser Kanaani said that Bagheri is attending because of this senior position in the administration. He said that there are no plans to continue the nuclear talks in New York but that the meetings between Iran and other countries could provide opportunities to exchange ideas on various issues.

The talks to revive the Joint Comprehensive Plan of Action (JCPOA) are at a standstill. Europe’s attempts to mediate a “final offer” was successful in reviving the talks temporarily but lingering issues between Iran and the United States remain. Washington exited the 2015 deal in 2018 and reapplied sanctions on Iran’s oil and banking transactions. In response, Iran increased its uranium enrichment from less than 5% to 60%.

One of the main points of conflict in reviving the deal is unresolved questions from the International Atomic Energy Agency, which Iran accuses of being a political pawn in the nuclear talks.