Moscow and Kyiv are exchanging accusations of endangering Israeli Jews wishing traveling to the Ukrainian town of Uman for the annual Jewish New Year pilgrimage. 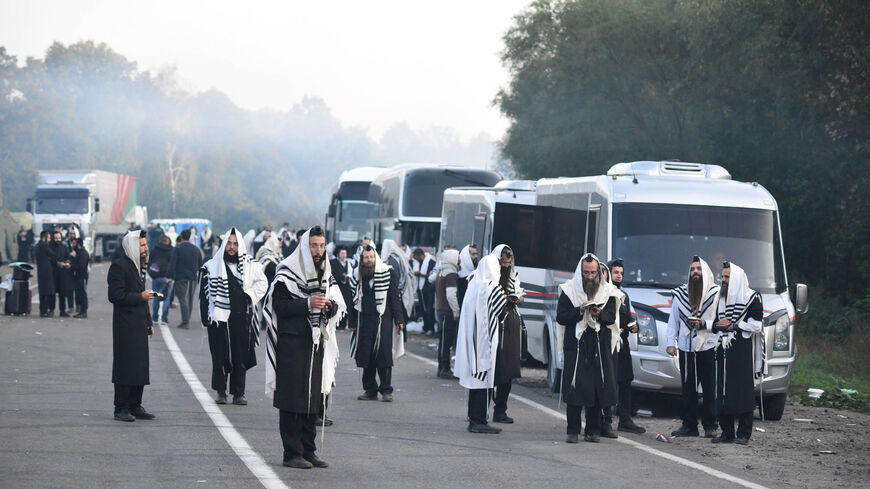 Reports Sept. 18 indicated that some 7,000 to 10,000 Israelis are expected to travel to Ukraine this week, ahead of the Jewish New Year, Rosh Hashana, to be celebrated Sept. 26. Other estimates place the number of Israelis expected to arrive to Uman for the New Year as high as 30,000. The Israeli pilgrims are heading for the town of Uman, where Hassidic Rabbi Nachman of Breslov is buried. Over 2,000 Israelis are already in Uman for these annual pilgrimage celebrations.

Israeli authorities had warned several times in recent weeks against traveling to Uman, because of the war in Ukraine. The most recent warning was issued by the Foreign Ministry Sept. 1. While numbers are expected to be much lower compared with some 50,000 Jews arriving to Uman in the years before the war and before the coronavirus pandemic, thousands of Israeli travelers are still avoiding the warnings.

On top of fears in Jerusalem for the safety of Israeli nationals, the issue of Israeli/Jewish pilgrimage to Uman has turned recently into a diplomatic dispute between Kyiv and Moscow.

Already on Aug. 16, Ukraine’s Ambassador to Israel Yevgen Korniychuk told Israeli press, "Rosh Hashanah is coming, and no matter what we say, Orthodox Jews will try to get to Uman again. We understand your willingness to go to Uman and favor your support for Ukraine, but this is not the right time. We cannot guarantee your security.”

On Sept. 6, the Ukrainian Embassy in Israel tweeted, "When the echoes of the Russian enemy explosions on Ukraine don't stop, we must take care of ourselves. Please, avoid coming to Uman on Rosh Hashanah and pray that peace will return to Ukraine and the blessed pilgrimage will be renewed." The tweet was posted both in Hebrew an in English, accompanied by a map of Ukraine showing all cities being bombed by Russian forces.

The Ukrainian warning generated an angry reaction by Russia, denying any intention of shelling the city.

In a Sept. 15 statement, the spokesperson for Russia’s Foreign Ministry Maria Zakharova dismissed Podolyak’s warning as “an absurd thought and of course fake." She said, “Nevertheless these comments need to be taken seriously because they are coming from the regime in Kyiv. There is no doubt that [the Ukrainians] are brutal enough to exploit the opportunity to create another anti-Russian provocation.”

Reportedly, a similar message was conveyed by Russian Deputy Foreign Minister Mikhail Bogdanov in a meeting he had with Israel’s Ambassador to Moscow Alexander Ben Zvi. Rejecting the Ukrainian accusation, Bogdanov said that Russia cannot guarantee the safety of Jews visiting Uman for an annual Jewish New Year pilgrimage, blaming Kyiv for the potential risk. Bogdanov also said that Israel needs to prevent its citizens from traveling to Uman for the Jewish New Year.

Israel has condemned the Russian war, while trying to preserve its strategic relations with Russia.

On Sept. 1, Prime Minister Yair Lapid spoke for the first time on the phone with Zelenskyy, who tweeted after the conversation, “I count on his country’s accession to the sanctions on Russia and provision of practical assistance to Ukraine in countering the aggression of the Russian federation.”

The Ukrainian government had long demanded that Israel offers weapons and tactical assistance to Kyiv, on top of its significant humanitarian assistance. Jerusalem refrained from offering such help for several weeks, until a shift in its position April 20. Defense Minister Benny Gantz then said Israel will send Ukraine defensive equipment. A second batch of Israeli defensive equipment was sent to Ukraine mid-July.

Israel Defense Forces Chief of Staff Aviv Kochavi is traveling today to Poland, for a three-day visit, and will continue from there to France. In both countries, Kochavi is expected to discuss mainly the Iran issue, as part of Jerusalem’s campaign against a renewed Joint Comprehensive Plan of Action, but he is also expected to discuss the war in Ukraine.