Ohood Khalfan Al Roumi, the UAE's minister of state for government development and the future, explains the Gulf state's strategic plans over the next half-century. 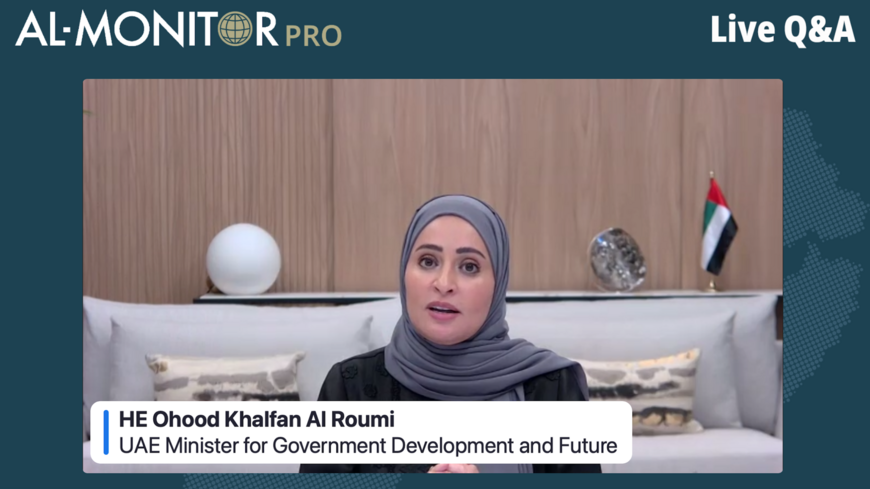 Developmental and economic projects in the UAE’s Projects of the 50 plan aim to make the Gulf state a global hub in the next 50 years.

Ohood Khalfan Al Roumi, the UAE's minister of state for government development and the future, told an Al-Monitor webinar Tuesday that the initiative aims to prepare the UAE for coming challenges.

“We see a continuous rise in emerging markets, rapid urbanization and hyperconnectivity between societies, governments and political systems,” said Roumi.

The minister identified three of the key elements of the UAE’s economic strategy for the future: trade agreements, advanced industry and creating new sectors.

On the trade agreements, Roumi pointed to the recent comprehensive economic partnership agreements the UAE has signed this year with India, Israel and Indonesia. Roumi said five new such agreements will be signed soon.

In the emerging crypto sector, Roumi touted the UAE’s Virtual Assets Regulatory Authority that began in March. This provides a framework for cryptocurrency and other digital assets, and has helped the UAE attract crypto firms. “We know the future will be digital, so it’s very important we double down on our digital efforts,” she said.

Roumi also said education will be important for the UAE to become a global hub across multiple sectors, particularly for Emirati citizens and residents. She highlighted one model whereby private education groups manage public schools in the Emirates, aiming to boost the quality of public education.

Roumi added that the UAE will continue to seek talent from abroad as well, pointing to the UAE’s new visa regimens aimed at attracting entrepreneurs, influencers and others.

Danny Sebright, the president of the US-UAE Business Council, told the meeting that the comprehensive free trade agreements will help companies connect to the world — not just the Gulf region — through the UAE.

“With these amazing new free trade agreements, there are opportunities to access markets all throughout the broader region,” said Sebright, adding that the UAE has a chance to become a global hub a la Singapore or London.

The agreements have already had an impact on UAE trade. For example, trade between Israel and the UAE through July of this year already surpassed that of last year.

Beyond the Middle East, the UAE recently launched talks with Kenya on signing a Comprehensive Economic Partnership agreement.

Afshin Molavi, senior fellow at the Johns Hopkins School of Advanced International Studies, also told the gathering that he is optimistic about the UAE’s capacity for global trade.

“The UAE, with 0.13% of the world’s population, already accounts for about 1.5% of world trade,” he said, citing his own research. “Anyone would say this is a country punching above its weight.”

The UAE launched the Projects of the 50 this year due to the 50th anniversary of the country's founding.