In an interview with Al-Monitor, Najib Mikati also says Lebanon should sign IMF agreement ‘as soon as possible.’ 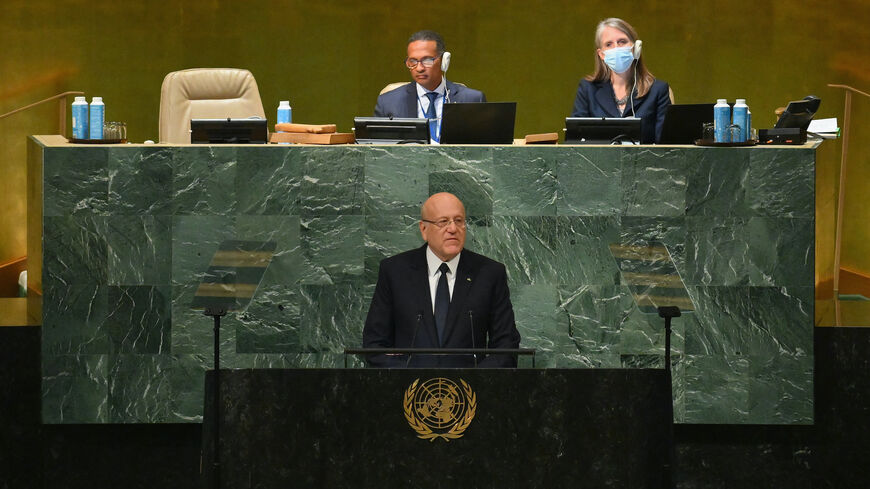 NEW YORK — US mediation has helped moved Lebanon and Israel closer to a gas deal, says Lebanon’s prime minister, Najib Mitaki, but "there are still details to be clarified."

"So far I can say we are close, but it’s not yet final," said Mikati, in an exclusive interview with Al-Monitor on the sidelines of the UN General Assembly meetings.

The Lebanese prime minister praised US mediation efforts in support of an agreement, saying, "The Biden administration is doing its best to have this negotiation succeed."

All of Lebanon’s political parties, including Hezbollah, support the government’s decisions and stance in the negotiations, Mikati said.

Lebanese President Michel Aoun’s term as president ends next month, and there are concerns about whether elections will be held in time.

While the election of a president is not a "full solution," for Lebanon’s many challenges, it’s still essential, Mikati said. He added that he discussed the prospects for timely presidential elections with world leaders during his meetings in New York.

"If we miss this opportunity, it would be another burden and problem for Lebanon," he said. "So a new president, yes, with a new team, a fresh team that can do, really, the required reforms. All the laws concerning reform exist, but you need a good political intention to put them in place."

Mikati is serving his third term as prime minister, and formed a government in July 2021 following the resignation of Prime Minister Hassan Diab after the Beirut port explosion in August 2020.

He inherited an economy in freefall and a political system in crisis. The Lebanese economy collapsed in 2019, provoking widespread demonstrations against government mismanagement and corruption. The country's GDP contracted by 21% in 2020 and 10.5% in 2021 – making Lebanon among the hardest-hit countries in the world by the COVID pandemic, according to the World Bank. The economy is expected to decline another 6.5% this year. Inflation is forecast for 120% in 2022. The official unemployment rate is approximately 14.5%, but the actual rate is even higher, including among youth.

The International Monetary Fund began talks on a reform package in May 2020, and there is even greater urgency now. The package includes restructuring of both the financial sector and external public debt; fiscal reforms; and strong anti-corruption and anti-money laundering measures. An agreement with the IMF would provide $4 billion in assistance and unlock billions in further support from other governments and global institutions.

An IMF mission to Lebanon this week concluded that the Lebanese economy "remains severely depressed" and that progress towards implementing reforms "remains very slow." It is estimated that the country needs at least $12 billion in order to jumpstart the economy.

Mikati wants to see Lebanon sign the IMF accord "as soon as possible."

"The IMF deal will be a kind of credit endorsement to enable other donor countries to help and assist Lebanon," he said. "Once this is done, I'm not worried at all that we can get the $12 billion very easily." The donors "promised us the day we signed with IMF, they can provide double or three times what IMF is offering to finance the public and private sectors."