The formation of a new government led by Prime Minister Najib Mikati brings to an end a 13-month gridlock in Lebanon. 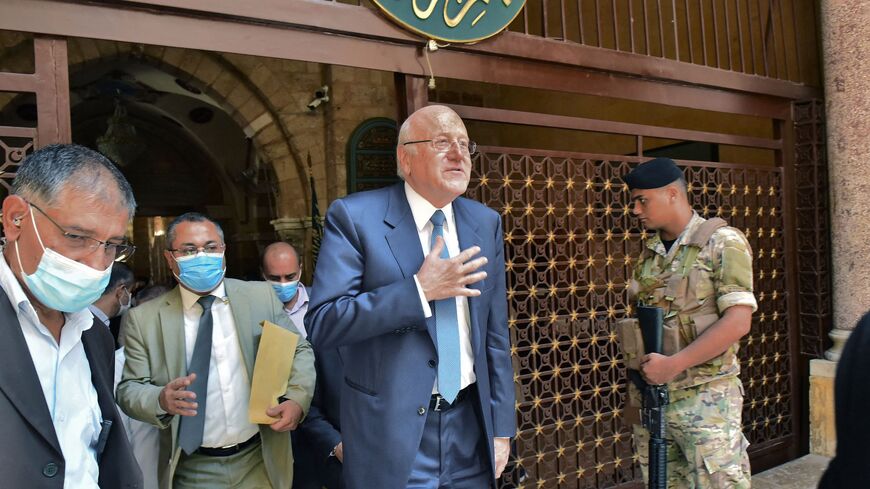 Prime Minister-designate Najib Mikati leaves the al-Omari mosque in the Lebanese capital Beirut on Sept. 10, 2021, ahead of meeting with the Lebanese president. - AFP via Getty Images

Lebanon’s leaders have formed a new government, ending the political stalemate that has gripped the country since the Beirut port explosion more than a year ago.

Najib Mikati, a billionaire tycoon, will serve as prime minister. He will be tasked with steering the small Mediterranean country out of its worst economic and financial crisis since its 1975-1990 civil war.

Mikati and President Michel Aoun agreed on the new government in the presence of parliament speaker Nabih Berri, Lebanese outlet MTV reported. After signing the decree at Baabda Presidential Palace, Mikati said he would try to prevent the country’s economic collapse.

"The situation is difficult, it is very difficult," Mikati told reporters at the palace, his voice choking up. “However, it is not impossible if we unite. … Our priority is to appease the suffering of the Lebanese people."

Lebanon has been led by a caretaker government since former Prime Minister Hassan Diab resigned in August 2020 amid protests demanding accountability for the Beirut explosion, which officials blame on a stockpile of highly explosive ammonium nitrate stored improperly at Lebanon’s most vital port. At least 215 people died in the blast, which caused billions of dollars in damage and added to the country’s already dire economic situation.

Mikati, who was named prime minister-designate in June, has held the position twice before. He served as caretaker premier for three months in 2005 following the assassination of Prime Minister Rafik Hariri. Mikati was elected prime minister in 2011 but resigned in 2013 under pressure from Hezbollah.

Under Lebanon’s power-sharing system, the position of prime minister must be held by a Sunni Muslim. The president is required to be Maronite Christian and the speaker of parliament a Shiite Muslim.

The new government will face pressure from former colonial power France, the United States and other international donors to implement meaningful economic reforms and anti-corruption measures. Since October 2019, the Lebanese currency has lost more than 90% of its value. Around half of the population lives below the poverty line.

"We will make use of every second to call international bodies," Mikati said.