Tehran has criticized the three European signatories to the nuclear deal for their recent joint statement questioning Iran's intentions. 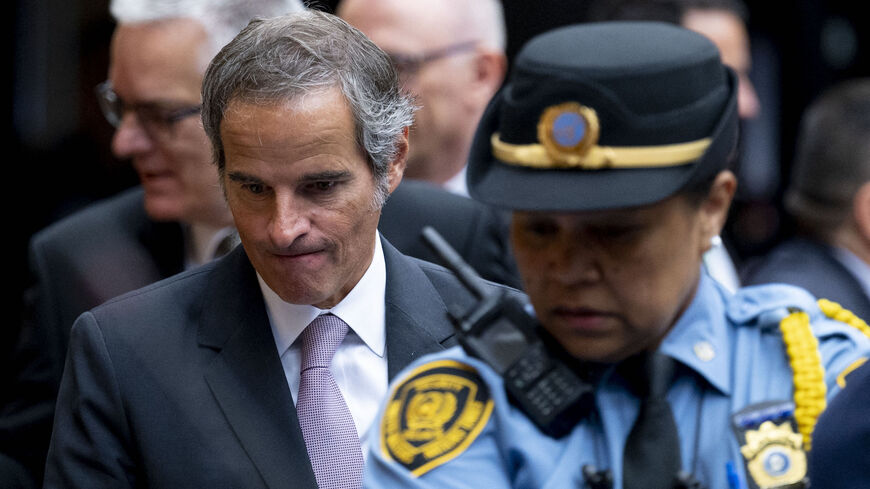 Rafael Grossi (2nd L), director of the International Atomic Energy Agency, arrives for a meeting at the agency's headquarters in Vienna, Austria on Sept. 12, 2022. - JOE KLAMAR/AFP via Getty Images

Iran has criticized the three European countries for their joint remarks about Iran in the talks to restore the nuclear deal, the Joint Comprehensive Plan of Action (JCPOA).

Iranian Foreign Ministry spokesperson Nasser Kanani said today at a press conference, “The three European countries who are members of the JCPOA should not take an unconstructive path. Iran is ready to cooperate with the International Atomic Energy Agency (IAEA) in the direction to remove the fabricated and unreal image in regard to its peaceful nuclear activities.”

Kanani continued, “An agreement is a two-sided path. The expectation is for the opposing side to act constructively, like Iran.”

Kanani’s comments came in response to the United Kingdom, France and Germany's latest statements regarding the JCPOA. The three issued a joint statement on Saturday saying that they have “serious doubts” about Iran's intention to return to the accord. They said that considering Iran’s “failure” to accept the deal presented, they will hold consultations on how best to deal with “Iran’s continued nuclear escalation.” The United States, Russia and China plus Iran are the other members of the JCPOA.

It appears that outstanding issues regarding the IAEA have stalled any progress on reviving the deal, which the United States exited in 2018 under President Donald Trump. Iran respond to the US exit and subsequent application of sanctions by expanding its nuclear program. Since President Joe Biden took office, the two sides have sought, through European mediation, to revive the deal but have failed to find common ground.

Iran believes that once the deal is restored, the requirement to resolve all IAEA issues will be used as an excuse for the West to leave it again. Kanani said at the press conference, “It has been proven that Iran’s nuclear activities are peaceful,” and “The IAEA must act in its responsibilities in a professional manner, without pressure from other countries such as the Zionist regime. Iran has been and is a supporter of banning nuclear weapons. Iran has stated its readiness to work with the IAEA.” He added, “Cooperation with the IAEA is based on law and responsibility; these two must go together.”

The IAEA is slated to begin a week-long board of director’s meeting today. Iran will likely be one of the main topics of discussion.

This latest round of negotiations has been billed as a “final offer” by the European Union to revive the deal, but neither the United States nor Iran seem to be in any rush. The Biden administration still has elections ahead and Iran is conscious of the fact that any deal with a Democratic US president is liable to be scrapped once a Republican is elected.

Asked when the nuclear negotiations would resume, Kanani said, “We have not received a request to postpone the negotiations until the US midterm elections.”