A report by Human Rights Watch finds Turkish authorities are not enforcing a law to protect vulnerable workers and local residents from toxic fumes. 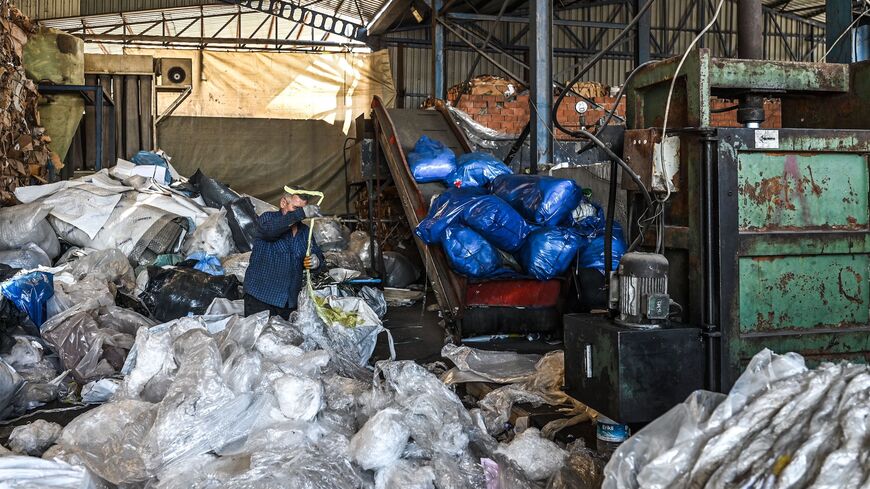 A worker sorts out plastic waste collected at a plastic recycling factory in Kartepe, district of Kocaelion, Turkey, May 11, 2022. - OZAN KOSE/AFP via Getty Images

ISTANBUL — Workers at plastic recycling plants, including child workers and nearby residents, are being exposed to serious health risks as the Turkish government fails to enforce laws on licensing and inspections, according to research by Human Rights Watch (HRW).

Imported plastic waste from the European Union is a significant contributor to the abuses, the report found.

The New York-based rights group said air pollutants and toxic emissions from waste recycling were linked to an increased risk of cancer, neurological problems and harm to reproductive health. They also cause short-term health problems such as asthma, breathing difficulties and eye irritation.

During the recycling process, plastic waste is shredded, washed, melted at high temperatures and turned into pellets.

“There’s a huge cauldron where they’re cooking the material; they keep adding water, which comes back up as steam,” said a 20-year-old waste worker in the southern city of Adana who started working at plastic recycling centers five years ago.

“When I inhaled that, it would feel like my lungs were squeezed and under pressure. … I stopped working there two months ago but I still have a problem with breathing.”

Sedat, 35, and his family have lived close to recycling facilities in Ova, a neighborhood in Adana, for three decades. He blamed the deaths of four relatives from cancer on the plants.

“If you stay so long in a place, you get sick,” he told researchers. “My 27-year-old sister died of colon cancer; this was 10 years ago. My brother died at 34 years of lung cancer four years ago. I believe it is the effect of the recycling plants.”

Workers and nearby residents described respiratory problems, severe headaches, skin ailments, as well as a lack of protective equipment and little to no access to medical treatment for occupational illnesses, HRW reported.

The EU was the biggest plastic waste exporter to Turkey between 2017 and 2021, while the UK was the largest single exporter over the same period. The report found both were contributing “significantly” to health and environmental rights abuses in Turkey.

Turkey banned imports of two common types of plastic waste in July 2021 following a series of media reports on the illegal dumping and burning of imported waste, but the ban was lifted nine days after going into effect.

After the ban was announced, EU exports dropped to nearly zero but then steadily rose to previous levels by late 2021.

EU regulations protect countries that import plastics and are not members of the Organization for Economic Cooperation and Development (OECD). Turkey, due to its membership in the OECD and its geographic proximity to the EU, is a key destination for European plastic, the report noted.

“Europe’s wealthiest countries are sending their trash to Turkey, consigning some of Turkey’s most vulnerable communities, including children, refugees and migrants, to serious environmental and health risks,” said Krista Shennum, a Gruber fellow at HRW’s environment division.

Recycling workers are from Turkey’s most vulnerable groups, including children, refugees and undocumented migrants. Some said they do not have access to medical services for work-related illness or injury. Their status also makes them less likely to complain about dangerous work conditions or the absence or protective gear.

HRW found that children as young as 9 work in plastic recycling facilities in Turkey despite laws prohibiting them working under hazardous conditions. Children are especially under threat from exposure to pollution and toxins.

To produce the 88-page report, HRW interviewed 64 people in Istanbul and Adana with experience working in recycling plants or who lived nearby between December 2021 and March 2022.

It found workers and local residents were not provided with basic information about levels of toxins in their environment or the risks from exposure, despite laws requiring the authorities and companies to monitor and share such information.

The report added that it was “unclear” how many plastic waste centers operated without the required permits and licenses. Even in licensed facilities, “environmental, occupational health and labor inspections often fail to adequately examine environmental and health conditions.”

The Ministry of Labor and Social Security told HRW there were 105 inspections of plastic recycling centers between 2017 and 2021, of which 26 were found in violation. However, only 10 of 26 workers interviewed by HRW said they had ever an inspection.