Due to lax regulations, plastic scrap imports to Turkey have skyrocketed since 2018; why is the AKP letting the country turn into a global wastebasket? 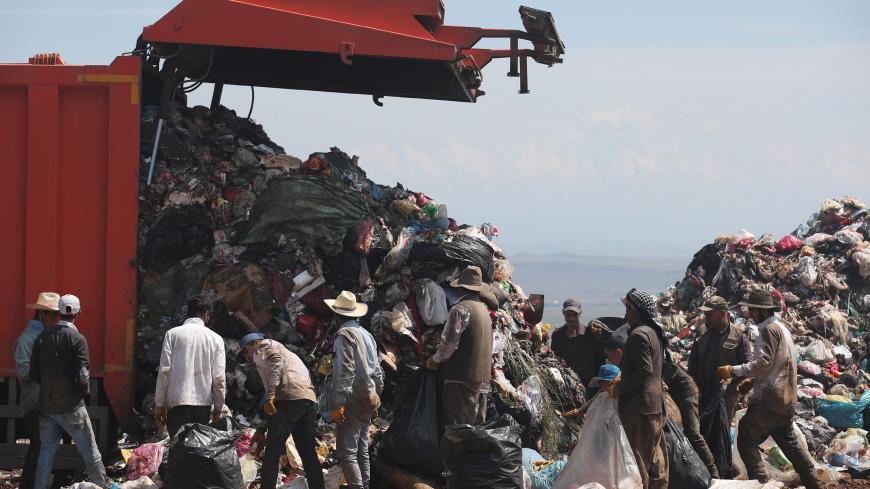 Garbage collectors look for recyclable waste at a dumping ground on the outskirts of southeastern province of Diyarbakir, Turkey, June 5, 2018. - REUTERS/Umit Bektas

A World Wildlife report this month on plastic pollution in the Mediterranean found the highest amount of plastic debris had accumulated in Turkey's Cilicia on the southeastern coast. The report also ranked Turkey as the second biggest contributor to mismanaged waste in the region after Egypt, with Turkey responsible for 18.9% of the waste in the Mediterranean. The report raises a crucial red flag for the near future. Since the Chinese government started enforcing strict regulations on its plastic imports in 2018, Turkey has become one of the world’s top 10 waste importers.

In the last couple of years, Turkish imports of plastic waste have made headlines in papers with alarming titles such as “New plastic waste bin of the world: Turkey” or “Turkey: Europe’s new trash can.” At the beginning of 2016, Turkey imported 4,000 tons of plastic waste monthly, while around the same time period in 2018 the number had reached 33,000 tons.

Why have Turkey’s plastic waste imports grown so exponentially?

Yavuz Eroglu, the president of the Turkish Plastics Industry Foundation, told Al-Monitor that Turkey ranks second in Europe as plastic producer after Germany and sixth in the world. Eroglu said, “We produce 10 million tons of plastics annually. 250,000 people are employed and 14,000 companies are active in the sector.” Eroglu and other experts say China’s new regulations limiting plastic waste imports are the main cause of the sharp rise in waste transported to Turkey and several other developing countries.

The supply from developed countries, particularly the UK (for the Turkish case), needs to be sent away as most developed countries find selling their waste more cost effective than recycling. Eroglu said that in the growing global circular economy, recycled materials are an important trend. “When we export goods to Europe, there is an increased demand for products that have recycled parts. There is a sizable interest in recycled plastic. Yet, there is the trick: for the plastic waste to be considered as a raw material it has to be clean. That is, there should be no other waste. It should be separated at the source. In Turkey this is difficult, meaning we fail to separate and recycle most of our plastic at the source.” Although official sources claim higher figures, most experts estimate only 20% of all such products are recycled in Turkey.

Limited recycling at the point of origin of trash has generated an underground industry of street workers, or scavengers, who collect recyclable trash. Recep Karaman, president of the Street Waste Collectors Association, told Al-Monitor that plastic waste imports are an unregulated business through which significant amounts of hazardous waste are entering Turkey. He shared with Al-Monitor an invoice of an interaction between a British and Turkish firm where 115 tons of plastic scrap was sent to Turkey at no cost. Karaman said, “It is not just clean plastic waste to be recycled, it contains hazardous materials these firms cannot discard in their home countries, such as pest control, hospital waste, harmful medications, motor oil and all kinds of other dangerous waste that need to be discarded professionally.” Karaman emphasized that these cheap imports had two visible consequences. First, they put a significant strain on Turkey’s own scavengers, whose livelihood is being threatened; the local waste management industry suffers as a result of a cheap supply of plastic scraps. Second is the environmental threat. He said, “These guys are the intermediaries. They buy the cheap plastic scraps and sell the good bits to the industry. The leftovers are not recycled but incinerated or landfilled.” Both methods are dangerous as they are conducted illegally and through primitive means, generating further pollution for air, soil and water sources.

The crucial issue both Karaman and Eroglu emphasize is that regulations and oversight for the kind of waste imported are too lax and ineffective. Baran Bozoglu, chairman of the Chamber of Environmental Engineers, said, “We asked questions about accountability and oversight to both Ministry of Environment and Urban Planning and Ministry of Customs and Trade. Who is to provide oversight for these imports? Neither agency provided proper answers.”
Bozoglu said an optimistic estimate is that 20% to 30% of all plastic waste imports are not recyclable and must be disposed of; he added that no concrete steps have yet been taken to protect the environment. Still, Bozoglu emphasized that some simple steps can be taken to minimize the damage. “There needs to be specific and clear guidelines about importing clean plastic waste that is ready to be recycled. There also needs to be proper monitoring of these imports. We know most are taken through customs in Kocaeli and Mersin provinces. Yet inspection is done visually. That is not sufficient. Every entry has to be tested professionally before allowed entry into the country.”

Although Turkey has a ban on importing hazardous waste material, it is not enforced properly. Importers need a license to buy plastic scraps, “yet many of these licenses weren’t given in a well-supervised manner. We expect a new regulation to be introduced where licenses would be granted with due diligence. It must be investigated whether the waste is of high quality, ready to be recycled. Second, inquiries must be made about the local companies. Do they have the capacity to process recycling of the material they are purchasing? This is not difficult to determine. One can tell from their consumption of water, electricity and other utilities how much recycling the facility has done in a month,” Eroglu said.

So why has the Justice and Development Party (AKP) government of the last 17 years failed to generate a proper waste management system? First, it is a lucrative business for the middlemen. Most experts in the field believe the government turns a blind eye on their activities due to high profits. A medical doctor who works at a government facility told Al-Monitor on condition of anonymity that a patient who died had said he had worked as a plastic waste importer the previous three years. "He was young, yet suffered an acute form of lung cancer, and he knew it was due to his own attempts to discard hazardous waste. He told us that some of the waste came hidden in secondhand cars imported from abroad. I will never forget his tears when he said, ‘You can get lots of things for free if you agree to buy some trash to go with it.”

Turkey has been a destination for hazardous materials for some time. “In 2007, in the heart of Turkey’s third largest city, Izmir, radioactive waste was reported officially,” Bozoglu said. For the last 12 years, there has been no solution to the 100,000 tons of radioactive waste in the Gaziemir district of Izmir. Yet, as the Ministry of Health does not share data, the public knows little to nothing about the health threats this waste may have generated. This seems to be a second reason why waste management is not taken seriously — it is not immediately visible. It is a similar situation to that in the Mediterranean, where most leaked plastic sinks to the bottom; while it damages the ecosystem and therefore public health, the extent of damage is not immediately visible to the eye.

Finally, projects to manage waste are not politically lucrative in terms of votes. Such projects, unlike roads or bridges, do not produce grandiose campaign promises. Their invisibility and high investment cost makes them less attractive when it comes to receiving any government spending. Given that the Turkish economy is in a recession, it is not realistic to expect an adequate investment from the government in the short term.

Yet if the public consciousness develops further, at least there could be a demand for stricter regulations and enforcement of waste imports. More recycling carried out at homes and through local municipalities is the first civilian step to take. It is a global issue, and this could help to curtail the waste supply from the West as well. After all, the nonrecycled waste never goes away; it show up along the shores where we vacation, in the seafood and the vegetables we consume and in the air we all breathe.