Ankara's complex ties with Moscow, the political cost of Syrian refugees and looming elections are all dictating dialogue with Damascus on Ankara, but it has yet to come up with a plan to proceed. 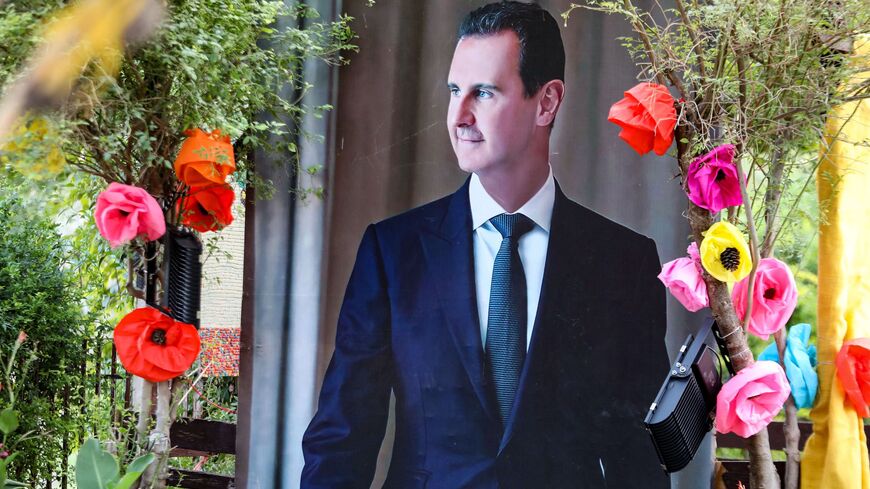 A large poster of Syrian President Bashar al-Assad is decorated with paper flowers during the opening of the 42nd International Flower Show in Tishreen Park in the capital Damascus on June 22, 2022. - LOUAI BESHARA/AFP via Getty Images

The prospect of fence-mending with Damascus continues to excite Turkey’s political scene after Foreign Minister Mevlut Cavusoglu revealed last week that he had spoken briefly with his Syrian counterpart during an international gathering in Belgrade in October and stressed the need to reconcile Syria’s opposition and government.

Opposition groups held protests at more than 30 locations in northern Syria as Ankara sought to assuage the anger with a pledge of continued “solidarity with the Syrian people.” In further comments this week, Cavusoglu argued that his initial remarks had been distorted. “I used the word ‘compromise’ and not ‘making peace,’” he said, adding that a political settlement between Damascus and the opposition was the only way to end the conflict.

Nevertheless, a senior member of the ruling Justice and Development Party (AKP) seemed to confirm the pangs of change in Ankara despite the apparent confusion on how to reorient. Asked whether President Recep Tayyip Erdogan could meet with his Syrian counterpart Bashar al-Assad, AKP deputy chairman Hayati Yazici said, “I cannot say this will never happen. [The dialogue] could start at a certain level and be raised to a higher level later.”

How and when the contacts could begin remains open to debate, but the argument for peace with Damascus is clearly gaining weight in various echelons of the Turkish state. A number of prominent retired diplomats and military officers have long been advising reconciliation with Assad. And even neonationalist quarters that back the government’s belligerent stance against the Kurds have been pressing for peace with Damascus.

A statement by Erdogan’s chief nationalist ally showed how the state establishment views the matter. Devlet Bahceli, the leader of the Nationalist Movement Party who has often influenced Erdogan’s decisions as his de facto coalition partner, hailed the foreign minister’s comments as a “strong boost” to settlement efforts in Syria. “The prospect of Turkey elevating its contacts with Syria to the level of political dialogue and uprooting terrorist organizations … in cooperation [with Damascus] stands to become an issue of the upcoming political agenda and is worth being seriously considered,” he said.

Bahceli expressed hope for normalization with “all neighbors” by 2023, a year of crucial elections in Turkey. Rising popular sentiment against Turkey’s hosting of millions of Syrian and other refugees is expected to bear prominently on the parties’ election platforms.

According to Cavusoglu, Russian President Vladimir Putin had long sought to convince Erdogan to talk to Assad, but the Turkish president had agreed only to bilateral contacts between intelligence officials. “Meetings between intelligence services took place at one stage. Then there were interruptions, and now they have begun again,” Cavusoglu said.

After his Aug. 5 meeting with the Russian leader in Sochi, Erdogan, too, said that Putin had proposed him to talk to Assad, but stressed that even the contacts between intelligence officials had yet to bear results.

Bahceli’s reaction is widely seen as reflecting the inner voice and thinking of the Turkish state, the main points of which could be summarized as follows:

A retired Turkish diplomat who closely follows the issue told Al-Monitor that Bahceli’s statement reflected the prevailing tendency in the General Staff, the National Intelligence Organization and the Foreign Ministry, but Ankara’s intentions were still unclear. “There is a flurry to do something before the elections,” he said, noting that Ankara’s vision on resolving highly complex issues, including the future of opposition forces and armed factions, remained unknown. According to the diplomat, the state establishment is convinced that dialogue with Damascus has become inevitable on issues such as the security problem in northern Syria and the return of refugees. “The steps that need to be taken are obvious, but the modus operandi of those who are supposed to put them into practice is giving me doubts,” he added.

A retired military officer, meanwhile, argued that the pressure for dialogue with Damascus was coming mostly from Putin and Turkish state institutions were far from a full consensus on the issue. Given Defense Minister Hulusi Akar’s good ties with Washington, in particular, any decision for a radical policy shift on Syria might face resistance from within, he told Al-Monitor.

Either way, Erdogan might have to heed the calls for a policy revision for the sake of his own political survival. His poll numbers have been sagging amid Turkey’s worst economic turmoil in years, marked by a foreign currency crunch and a galloping inflation. Flows of Russian funds to Turkey since late July are likely a factor behind Ankara’s quest for a new course in Syria, as Erdogan appears to increasingly rely on Putin ahead of the elections next year.

As part of the Astana platform designed to reconcile Assad’s government and the opposition, Turkey was able to bring armed factions not designated as terrorist groups by the UN into the process and act as their guarantor. Astana, in turn, paved the way for the creation of a constitution-drafting committee, including government, opposition and civic society representatives, at the UN-sponsored negotiations in Geneva. So the opposition was well aware that participation in the Astana and Geneva talks meant participation in a reconciliation process.

Of course, neither Turkey nor its Syrian allies believed in the success of the talks. Despite commitments made in the Astana talks, the parties continued to use force on the ground to advance their gains. Turkey brought a number of armed factions together under the umbrella of the so-called Syrian National Army and steered the war to Kurdish-controlled areas in the north.

Ankara is now trying to argue that it is not really changing tracks because it has backed settlement efforts ever since the UN Security Council approved Resolution 2254 on Syria in 2015. But no matter what term is used — be it peace or compromise — things are clearly different this time. And it’s obvious to everyone that Turkey has to call it a day with the armed groups in Syria to make sure its overtures to Damascus are not left unanswered. That’s why the rebels are gripped by fear now, something they have not felt in the Astana talks. For Assad’s government, an end to Turkish military presence in Syria is another precondition for a new chapter in ties.

Though the need for fence-mending with Damascus is imposing itself, the current state of affairs is not helping the parties to move ahead. Ankara could hardly hope for progress by keeping its safe-zone plan on the table. In the talks between intelligence officials, the Turkish side has reportedly sought a revision of the 1998 Adana Accord between the two countries, which would expand Turkey’s right to hot pursuit of PKK militants from five to 32 kilometers inside Syria.

And amid the talk of dialogue, Turkish jets bombed a base near the Kurdish-populated border town of Kobani, where Syrian soldiers were stationed, causing deaths and injuries. The Aug. 16 airstrike, which followed a deadly attack on a Turkish border post, speaks of Turkish intolerance even to Syrian government troops in the 32-kilometer strip, not to mention that it undermines Turkey’s offer for dialogue.