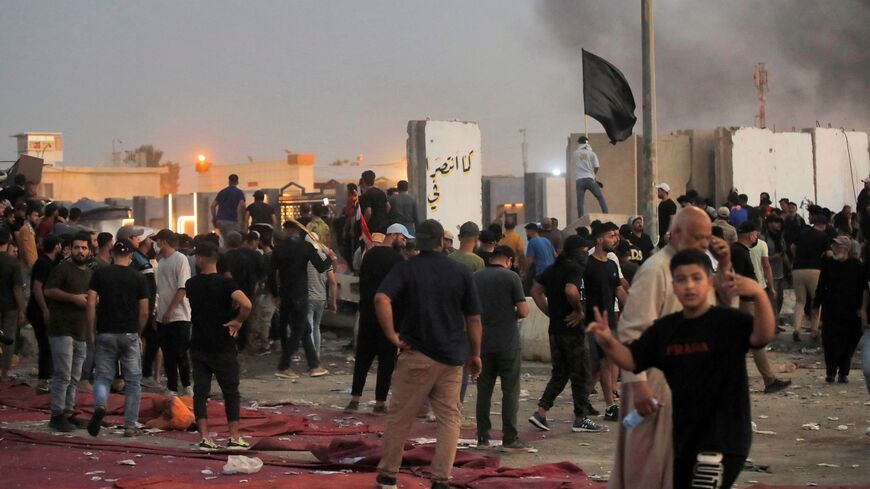 Supporters of Iraqi Shiite cleric Moqtada Sadr are pictured gathering in the capital Baghdad, on Aug. 29, 2022. Dozens of angry supporters of the powerful cleric stormed the Republican Palace, a ceremonial building in the fortified Green Zone. - AHMAD AL-RUBAYE/AFP via Getty Images

Our take: Baghdad’s worst period of violence in years has subsided, but the underlying tensions between Iraq’s Shiite political factions have not.

President Joe Biden and Iraq’s caretaker Prime Minister Mustafa al-Kadhimi spoke by phone Wednesday after fighting in the capital this week killed more than 30 people and injured hundreds, in an unnerving episode of violence set against the backdrop of Iraq’s political gridlock.

The two leaders “welcomed the return of security to the streets, and called on all Iraqi leaders to engage in a national dialogue to forge a common way forward,” according to a White House readout of the call.

How we got here. Iraq has been in a state of political limbo since its parliamentary elections in October 2021. Candidates loyal to firebrand Shiite cleric Moqtada al-Sadr emerged from the nationwide poll with the most seats, but not enough to form a majority government.

Sadr, a fervent critic of both US and Iranian interference in Iraq, “failed to gather the necessary seats to form a new government due to the Coordination Framework's success in forming a so-called 'blocking third' that stopped the selection of the president,” our team in Iraq explains.

In June, Sadr called on his parliamentarians to resign in protest, and the Coordination Framework, an umbrella grouping of pro-Iran parties, became the legislature’s largest Shiite bloc.

The latest clashes were triggered by a tweet from Sadr on Monday, in which the populist leader claimed he was exiting politics. His armed supporters responded by storming the Republican Palace in the Green Zone, the high-security area in central Baghdad that’s home to the US Embassy, the Iraqi parliament and other government institutions. They were confronted by Iraqi security forces, as well as Iran-backed paramilitaries outside the palace.

In a televised address on Tuesday, Sadr slammed the militias, apologized for his supporters’ role in the unrest and urged them to stand down. Within minutes, they heeded his call.

What happens next? The Sadrist movement and the rival Coordination Framework are no closer to agreement on a political roadmap.

The Coordination Framework wants to proceed with forming a new government but it’s unclear whether it has enough support from its Sunni and Kurdish allies. Sadr, meanwhile, wants to dissolve parliament and hold a fresh election.

“The political dispute is expected to continue unless the political parties gather for a national dialogue and reach an agreement,” said Al-Monitor’s Iraq editor Ali Mamouri.

“Iraqis are really tired of decades of violence,” said Mamouri. “The last two years was a good example of Iraq moving away from conflict, but now Iraqis are concerned about returning to this history of conflict again.”

Marsin Alshamary, a research fellow at the Harvard Kennedy School's Middle East Initiative, says a long-term plan is needed to address the fact that Iraq is “basically a tinderbox,” noting that “any slight agitation between armed groups can create extreme upheaval.”

What can the US do? Nearly 20 years after the American invasion, “it's important that the lesson that Iraqis learned in 2003 — that the US will go to great expense to address crises in Iraq — is unlearned, because that’s no longer going to be the case going forward,” said Alshamary.

Randa Slim, senior fellow at the Middle East Institute, says the Biden administration can encourage dialogue but at the end of the day has limited leverage with leaders on the ground.

“As long as we're not willing to put any skin in the game, which we are not right now, this administration has very limited influence,” Slim said.

“Whether it is in Lebanon, whether it's in Iraq, whether it's in Syria … local and regional actors have taken over the tempo of political life in these countries,” she said. “And we are pretty much absent.”

For more Al-Monitor coverage of Iraq’s political turmoil, check out Amberin Zaman’s latest on how the deepening intra-Shiite deadlock is impacting Iraq’s Kurds and Adam Lucente’s breakdown of the regional reaction.

Israel’s Mossad director David Barnea generated a wave of headlines last week after telling reporters that the emerging nuclear deal with Iran was an unprecedented fraud. Barnea’s unusually public comments took Israeli Prime Minister Yair Lapid by surprise. Lapid then summoned Barnea for clarification and conveyed to Washington that the Mossad chief’s views  didn’t necessarily reflect his own. Ben Caspit writes that Lapid’s aides have since “made clear to their American counterparts that Israel had not engaged in a ‘sting’ operation of the type favored by [Benjamin] Netanyahu.”

Turkey released jailed pop singer Gulsen on house arrest Monday as she awaits trial on charges of “inciting hatred and enmity.” Gulsen landed behind bars on Aug. 26 after an Istanbul prosecutor opened an investigation into a quip she made on stage about religious secondary schools. Nazlan Ertan writes that her arrest “adds to the claims that the judiciary has become a tool in the hands of the government and is used to shut down the opposition and punish those who do not subscribe to a conservative lifestyle.” It also reflects the growing conflict between the Turkish government and the entertainment industry.

A Tehran art museum is under fire after a video showing two bugs inside the frame of a 1978 piece of art went viral on social media. The insects appeared to be paper-eating silverfish, and it’s believed they got inside the frame during the artwork’s unpacking outdoors. The Tehran Museum of Contemporary Art, which is home to more than 3,000 world-class paintings and other works of art, downplayed the bugs’ threat to its collection but closed temporarily for fumigation, Shekufe Ranjbar reports. Farah Pahlavi, the wife of Iran’s last shah, acquired the billion-dollar collection when Iran’s oil revenues soared in the 1970s.

The Egyptian government recently announced that it reclaimed a majority of Warraq Island, located southwest of Cairo on the Nile River. Our correspondent in Egypt reports that security forces have begun evicting the island’s residents and demolishing their homes, claiming they are infringing on state property. The Egyptian government has been planning since 2014 to turn Warraq Island into a tourist park, as part of a wider project to develop Greater Cairo. On Aug. 15, clashes erupted between residents facing eviction and security forces who used tear gas to disperse them.

After Israeli Prime Minister Yair Lapid announced Aug. 17 that Israel and Turkey will restore full diplomatic relations, Israeli officials made clear they expect Ankara to shut down the Hamas office in Istanbul. Turkish President Recep Tayyip Erdogan has stressed that normalization with Israel won’t diminish his country’s support for the Palestinian cause, but experts speculate that Turkey might try to reduce Hamas’ presence on its territory. For now, Hamas officials are staying put. In an interview with Mai Abu Hasaneen, Hamas spokesperson Hazem Qassem denied that Turkey had requested the Gaza-based group’s members to leave.

Watch Joe Snell explain double-tap strikes, and how Russia and the Syrian government are using them to target civilians and rescue workers.

Amberin Zaman interviews Iranian expert Hamidreza Azizi about how failure to revive the nuclear deal could see Iran taking action against Israel in Syria and beyond.

Gilles Kepel speaks with Zineb Mekouar about her debut novel that highlights social and political divisions in Morocco.