The United Arab Emirates and Greece have signed a variety of political, defense and economic agreements in recent years. 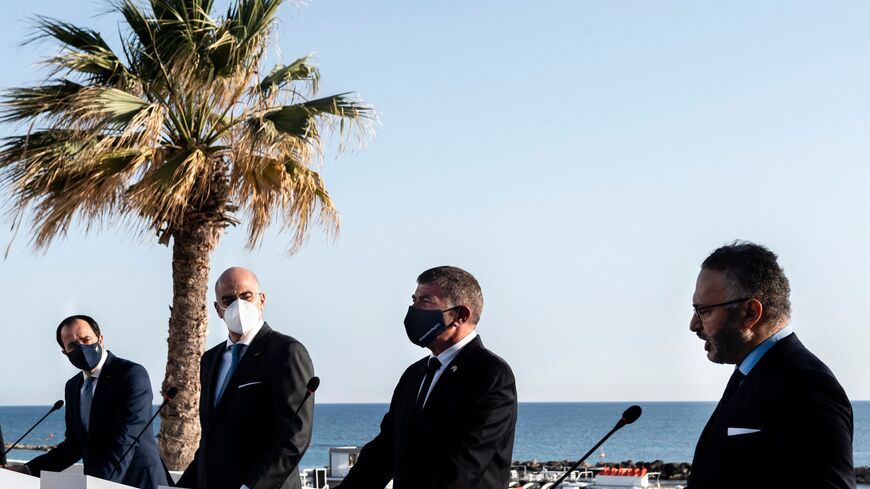 Ministers of Foreign Affairs of Cyprus Nikos Christodoulides; Greece, Nikos Dendias; Israel, Gabi Ashkenazi; and adviser to the president of the United Arab Emirates Anwar Gargash hold a press conference after meeting in the western Cypriot city of Paphos, on April 16, 2021. - IAKOVOS HATZISTAVROU/POOL/AFP via Getty Images

The arrangement allows Emirates customers to book Aegean flights through Emirates and vice versa. Emirates flyers will be able to book flights on the Emirates website to additional Greek destinations such as the Mykonos and Rhodes islands, the airline said in a press release.

Codeshare agreements are common in the airline industry and benefit travelers by allowing them to use their frequent flyer miles with one airline for a flight operated by another, for example.

Emirates is one of the the United Arab Emirates’ flagship airlines, along with the Abu Dhabi-based Etihad. Emirates is owned by the government of Dubai.

Why it matters: The Emirates-Aegean deal comes as the UAE and Greece are growing closer. The Gulf state has publicly supported Greece in its maritime dispute with Turkey over drilling in the Eastern Mediterranean. In 2020, the two countries signed a defense agreement.

More recently, in May, the Abu Dhabi sovereign wealth fund ADQ inked a $4.2 billion investment deal with its Greek counterparts.

Know more: Emirates has pursued tourism-related partnerships with a few countries this year. In February, the airline signed an agreement with Thailand’s Tourism Authority. The same month, Emirates made a similar deal with Saudi Arabia.