Ankara has long viewed foreign courts’ refusal to repatriate suspects as a sign of obstruction by their governments, but the West looks askance at the Turkish judicial system. 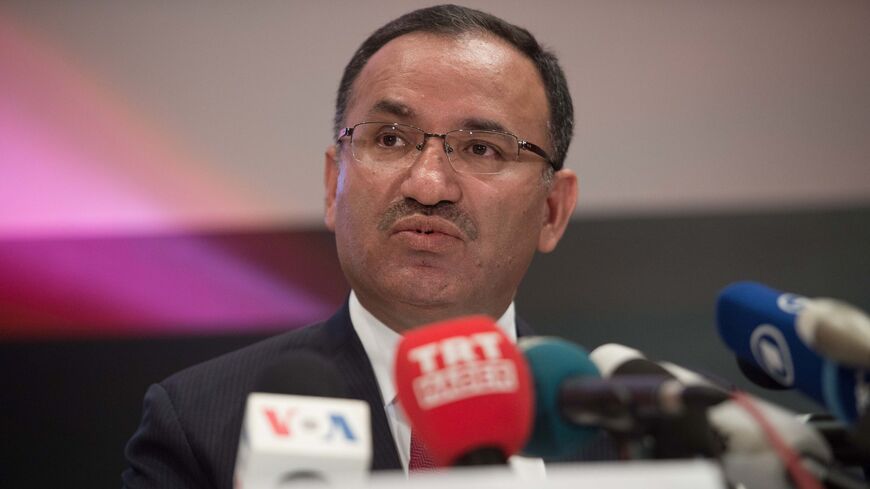 Turkish Justice Minister Bekir Bozdag speaks at a press conference at the Turkish Embassy in Washington, DC, on Oct. 27, 2016. -

ISTANBUL —  A wanted Turkish businessman will be delivered to the US on Friday, extradited from Austria despite a separate extradition request from Ankara.

Sezgin Baran Korkmaz, who is wanted in both Turkey and the US over allegations of laundering $133 million and wire fraud, was arrested in Austria in June last year. He has denied the accusations.

Turkey’s extradition demands are increasingly under the spotlight after the repatriation of suspects from Finland and Sweden became a key issue in their bids for NATO membership.

As the CEO of SBK Holding, Korkmaz was said to be close to senior figures in the Turkish government. Following his arrest, it was revealed that Interior Minister Suleyman Soylu used a private plane owned by the businessman during a 2017 referendum campaign.

According to a Wall Street Journal report, the Turkish government is concerned that Korkmaz could lift the lid on corruption claims if he appears in a US court.

Turkish extraditions have long been frustrated by foreign courts and been a point of contention with its Western allies. European and American politicians have stressed that extradition lies in the hands of their judicial systems, not the government, and so cannot be guaranteed.

“In extradition cases, the human rights situation in the requesting state is examined, and Turkey's record in this regard is no good,” said Ali Yildiz, a Brussels-based human rights lawyer. “There is no guarantee for the right to a fair trial [and] there are credible reports of widespread torture. Overcrowding of prisons is also a negative factor.”

Ankara opposed Sweden and Finland joining NATO in May, partly due to the failure of the two Nordic countries to extradite suspects whom Turkey deems to be terrorists.

Turkey lifted its threat of veto after Stockholm and Helsinki signed a memorandum that addressed the issue of extradition “in accordance with the European Convention on Extradition.”

At the end of the NATO conference in Madrid, Turkish President Recep Tayyip Erdogan said Sweden had pledged to extradite 73 Turkish nationals wanted by Ankara.

The pro-government Hurriyet newspaper published a list of 45 people, including 33 sought from Sweden and 12 from Finland.

Most are said to be members of the Kurdistan Workers’ Party (PKK), which has waged a 38-year insurgency against the Turkish state and is considered a terrorist group by the US and EU. Others are members of the group said to have organized a 2016 coup attempt in Turkey.

However, Sweden and Finland’s legal system makes it difficult for Turkey to extradite all the suspects.

As well the independent courts making the decision, neither country can extradite those with Swedish or Finnish citizenship. Foreign nationals can only be extradited according to the rules of the European Convention on Extradition and not for political crimes or to countries where there is a risk of persecution. The alleged offenses must also be seen as a crime in Sweden or Finland.

Swedish newspaper Dagens Nyheter reported that of the 33 Swedish suspects listed by the Turkish media, 19 had already been rejected for extradition by the Supreme Court. Chief Justice Anders Eka said the courts could not process cases that had been concluded.

In Finland, which has extradited two people out of more than a dozen Turkish requests over the past decade, the Justice Ministry said no fresh requests had been received.

Perhaps the best-known Turkish extradition demand in recent years has been for Fethullah Gulen from the US.

Gulen, who has lived in self-imposed exile in Pennsylvania since 1999, is wanted in connection with the 2016 coup attempt. Ankara blames the failed putsch on Gulen and his followers, who it has labelled the Fethullah Terrorist Organization (FETO). Gulen denies the allegations.

Despite numerous meetings between Turkish and US officials, there has been no move to remove the former imam.

Likewise, efforts to repatriate Gulen’s alleged supporters back to Turkey have often run into judicial obstacles in Western courts.

In 2018, a court in London rejected the extradition request for exiled businessman Akin Ipek on charges of financing terrorism, conspiracy to launder the proceeds of crime and fraud. The court ruled that he faced the risk of ill-treatment should he be returned.

The judge in the case said he had “serious reservations about the current state of the rule of law in Turkey” and that there was “substantial evidence that this request is politically motivated.”

In an interview with the state-run Anadolu news agency on Tuesday, Turkish Justice Minister Bekir Bozdag said Turkey had submitted 1,133 extradition requests for suspected Gulenists to 110 countries since the failed coup.

“To date, three of our extradition requests, two from Hungary and one from Algeria, have been accepted,” he added.