Syria's Assad in first official visit to Aleppo since war 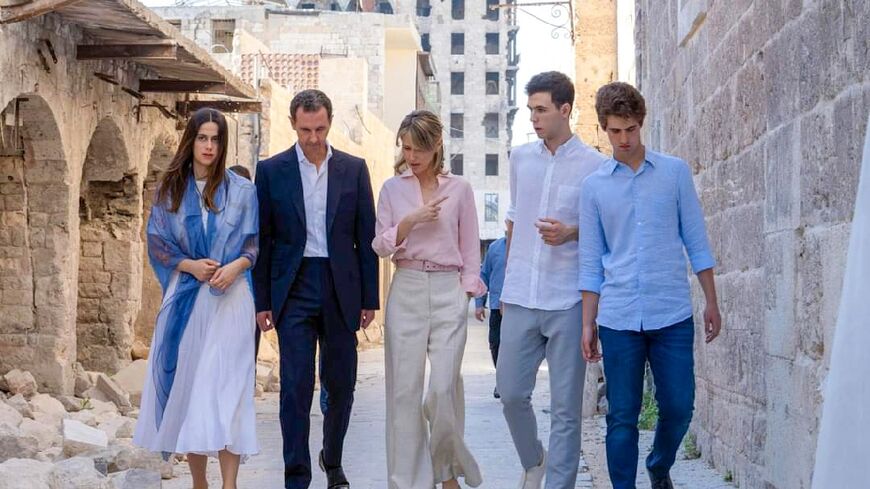 Assad's visit with his family to Syria's second city and former economic capital is highly symbolic as his 2016 victory there -- with crucial military support from Russia -- was a turning point in the war - -
Agence France-Presse
July 8, 2022 — Damascus (AFP)

Syria's President Bashar al-Assad on Friday visited the former rebel bastion of Aleppo, including its historic Old City, for the first time since war broke out 11 years ago.

The visit to Syria's second city and previously the economic capital is highly symbolic as Assad's 2016 victory there -- with crucial military support from Russia -- was a turning point in the war.

They also "walked through the Old City's souks, which were open on the occasion of Eid al-Adha", it added, referring to the Muslim feast set to begin on Saturday.

Both sites had suffered massive damage in the fighting.

Before the war, the northern city -- considered to be one of the world's longest continuously inhabited -- boasted markets, mosques, caravanserais, and public baths, but a brutal siege on rebels left it disfigured.

Fighting damaged as much as 60 percent of Aleppo's Old City, according to estimates by the UN's cultural agency, UNESCO.

Aleppo province was also the scene of fierce battles between government forces, rebels and Islamic State group jihadists from 2012 until Russian-backed government forces gradually ousted them.

Assad was also present for the relaunching of a water pumping station, statements from the Syrian presidency said on Telegram.

Electricity networks and other infrastructure across the country were ravaged by the war, which is estimated to have killed nearly half a million people and displaced millions.

The Syrian government does not have authority over all of Aleppo province, with areas on the Turkish border still controlled by Ankara-backed groups and the Kurdish Syrian Democratic Forces.

The recently rehabilitated part of the power station, one of the country's largest, will generate 200 megawatts of electricity for the province, the presidency said.

In 2021, Aleppo's state-run electricity company announced the power station would be rehabilitated with support from Iran, another Assad ally.

Tehran signed several agreements with Damascus in 2017 to improve the production and distribution of electricity in war-ravaged Syria.

The deals included the rehabilitation of the Aleppo power plant, building a power station in Latakia, as well as repair and maintenance work in other regions.