While joining the bloc has its upsides, it will be extremely difficult for Tehran to get full benefits from BRICS without the complete lifting of Western sanctions. 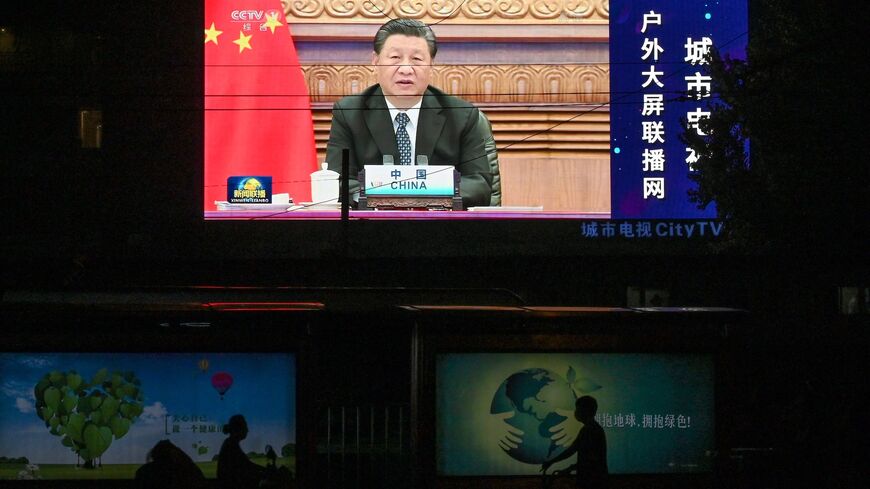 A large screen shows a news program featuring Chinese President Xi Jinping speaking via video at the opening of the virtual BRICS Summit being hosted by India, on a street in Beijing on Sept. 10, 2021. - GREG BAKER/AFP via Getty Images

Recently, Iran applied to join BRICS, a group consisting of Brazil, Russia, India, China and South Africa. On a global level, this forum represents 40% of the world population and 26% of the world economy. According to IMF data, China has the largest economy in this grouping and accounts for more than 70% of the BRICS total worth of around $27.5 trillion, while India comes in second at 13% and Russia and Brazil comprise the remaining 7%.

Now with Iran's entry, more value will be added to BRICS as it holds around a quarter of the Middle East's oil reserves and second-largest global gas reserves. Invited to a virtual meeting of the BRICS summit, Iranian President Ebrahim Raisi has delivered a speech expressing Iran’s readiness to share its vast capabilities and potential to help the BRICS countries attain their goals.

Around the same time that Tehran joined, two-day talks in Doha to resuscitate the Joint Comprehensive Plan of Action (JCPOA) deal between Iran and the United States ended without any positive result. Apparently losing hope of normalizing its ties with the Western bloc, Iran could be exploring alternate options to survive economically under the current US sanctions.

Since joining the Shanghai Cooperation Organization (SCO) last year, this participation in BRICS is Iran’s second step toward the East. Feng Xingke, secretary-general of the World Financial Forum and director of the Center for BRICS and Global Governance, told the Global Times that including Iran in BRICS will mean closer and more effective channels between resources and markets, which will benefit all members.

Discussing the motive behind this move, Hamidreza Azizi, CATS Fellow at the German Institute for International and Security Affairs in Berlin, told Al-Monitor, “The Rouhani administration was trying to pursue a balanced foreign policy and believed that having normal relations with the West is the key to expanding relations with the East and vice versa. But since President Raisi took over last year, Iranian foreign policy has increasingly become anti-Western in the traditional sense of the word.”

Consequently, he said, “Iran’s moves to join different non-Western groupings, from SCO to BRICS, are presented as the inevitable path the country needs to take in a world in which — as the narrative goes — the West is experiencing a political, economic and moral decline. In that sense, even the JCPOA if revived is a tactical solution, while Eastward policy is of strategic nature.”

However, even though it was the 20th anniversary of BRICS last year, its achievements have remained debatable. In 2017, a BRICS plus concept was also introduced to link more emerging economies and build consensus on global development, but the group seems to be hampered by these basic factors.

To start with, China has become the world’s second-largest economic power, while Brazil, Russia and South Africa have remained far behind. Only Beijing has moved forward in the group while other member countries may be large in size but are not equal in wealth. Though there are annual meetings, intra-BRICS economic cooperation has remained very limited.

Jim O’Neill, who coined the BRICS acronym when the group was launched, wrote, “The bloc’s economic trajectory has been a mixed bag. While the first decade was a roaring success for all four countries, with each surpassing all four scenarios that I originally outlined, the second decade was less kind to Brazil and Russia, whose respective shares of global GDP have now fallen back to where they were 20 years ago. If it weren’t for China — and India, to some degree —there wouldn’t be much of a BRICS story to tell.”

Next, most member countries have divergent political interests. While Russia and China may view it as a forum “building a more balanced global order,” India is part of the Quadrilateral Security Dialogue, also known as the Quad, and is reluctant to be labeled anti-West. And now, New Delhi and Beijing also have an ongoing military standoff at their mutual border — a temporary line called the Line of Actual Control.

Discussing why India had joined BRICS, Ashok Swain, professor of peace and conflict research at Uppsala University in Sweden, told Al-Monitor, “India decided to join BRICS in 2006 when its economy was booming, and it expected to catch up with China in economic development. Russian diplomacy was behind creating this bloc at that time, but not precisely to make it an anti-American grouping. Russia wanted India in it to balance China, for India it was a platform to maintain a cooperative structure with China and Russia while developing its strategic relationship with the West.”

But now, Swain observed, “China does not need BRICS anymore as much as BRICS needs China. The relationship between China and Russia has become stronger while China and India's relationship has deteriorated considerably. So, India’s value for BRICS or vice versa is not the same as it used to be a decade ago.”

Lastly, initially all the member countries had shown signs of high growth but things did not work out as planned. As Stephen Grenville wrote for The Lowy Institute, “What lasting contribution did BRICS make? They had a few desultory meetings and formed a BRICS bank, which added nothing (in terms of funds or ideas) to the existing multilateral development banks.”

Under these circumstances, what can BRICS offer Iran?

A European diplomat posted in Islamabad told Al-Monitor, “Tehran is aware of the great potential members have to establish an independent financial mechanism to neutralize Western attempts to impose their policies, in particular, to challenge the Swift mechanism, whose availability for Iran on the short/medium term will be strictly linked to the future of the nuclear talks.”

Nevertheless, he said, “It will be extremely difficult to get full benefits from BRICS without the complete lifting of Western sanctions. The potential of the Iranian economy is huge; its development requires Western technology, especially in the energy sector, something which BRICS countries cannot fully provide. Therefore, Tehran is following several parallel paths like the SCO, ECO, INSTC, hoping at the same time for the resumption of the JCPOA.”

In Azizi’s opinion, “There is not much Iran can actually get from BRICS in the short to medium term, except for some room for political and diplomatic maneuvering. There is no real prospect for the BRICS countries to ignore the US sanctions — which may be complemented by European sanctions if the JCPOA talks fail — for the sake of having trade and economic relations with Iran. What Iran often boasts about, in terms of China and Russia continuing to work with Iran despite the US sanctions, is first a bilateral issue and second comes with a considerable cost such as the discount Iran provides for China for its oil trade. Therefore, neither SCO nor BRICS are expected to help Iran find a way out of the current economic difficulties.”

Considering Iran’s chemistry with Beijing and Moscow, Swain observed, “Iran will benefit considerably by joining BRICS, as it does not intend to be an ally of the West and its relations with China and Russia are more as a junior ally, not as a competitor. As part of BRICS, there is a lot for Iran to gain, economically and diplomatically.”

Ultimately, BRICS could become a club of the world’s largest energy producers and consumers outside the United States. For a while, the forum has been working on a mutual payment system, credit rating agency, currency bank and reserve mechanism. In this way, member countries might escape US sanctions.