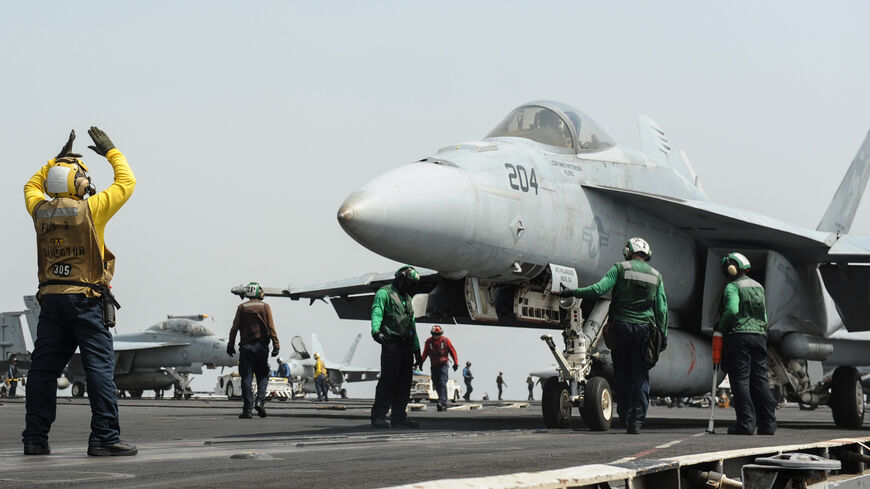 In this handout released by the U.S. Navy, an F/A-18E Super Hornet prepares to launch from the flight deck of the aircraft carrier USS Nimitz Sept. 3, 2013 in the Red Sea. - US Navy via Getty Images

“Today we can confirm that Iran is methodically basing itself in the Red Sea, with its ships patrolling the southern region,” Gantz said during a forum hosted by the Economist magazine in Greece today.

“In the last month, we’ve identified the most significant Iranian military presence in the area in the past decade. It is a direct threat to international trade, energy supply, and global economy,” the Israeli defense chief said.

The US Navy’s Fifth Fleet did not immediately respond to a request for comment.

Why it Matters: Iran’s navy has patrolled the Red Sea for years, claiming intent to protect its own commercial shipping.

Last year, an Iranian spy ship was towed away from the Bab al-Mandab at the mouth of the Red Sea after it was damaged in an apparent attack. The ship was later replaced with another suspected Iranian spy ship.

The US Navy’s Fifth Fleet established two new international task forces over the past year to patrol the Red Sea for illicit smuggling, but has declined to specify a focus on Iranian activities.

The US announced Task Force 153 as the latest addition to the Combined Maritime Forces (CMF) coalition in April to enable more efficient patrolling extending to the seas off the Yemen-Oman border in the Gulf of Aden. The US also stood up Task Force 59, a separate US-led unit focused on deploying and testing unmanned seafaring drones in the Red Sea to gather data.

“The area is so vast that we just can't do it alone," 5th Fleet commander Vice Adm. Bradley Cooper said in April. Seizures of smuggled weapons interdicted by the CMF tripled last year over 2020, Cooper said in May. The US Navy on Tuesday announced a program offering up to $100,000 in cash transfers to individuals who report on illicit smuggling in Middle Eastern waters.

What’s Next: The US Fifth Fleet aims to expand its unmanned presence to 100 sea drones in the Red Sea by summer 2023, and expects additional countries to join Task Force 59, including possibly Israel and Kuwait.