The inflation rates in Turkey, Egypt and other countries in the region are considerably higher. 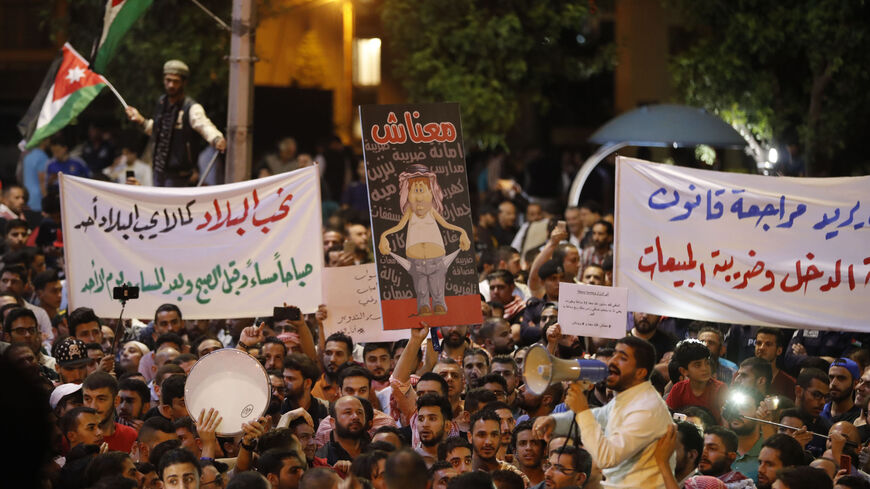 Demonstrators hold up posters in front of Jordanian policemen during a protest near the prime minister's office in Amman, Jordan, on June 6, 2018. Jordanian Prime Minister Hani Mulki resigned June 4 after a wave of anti-austerity protests by citizens suffering from high unemployment and repeated price hikes. - AHMAD GHARABLI/AFP via Getty Images

Jordan experienced an increase in inflation during the first half of the year.

The Hashemite Kingdom’s Consumer Price Index, which measures inflation, increased 3.34% in the first six months of 2022. The index in June rose 5.17% compared to the same month last year. Fuel rose 1.26%, transportation 0.95% and rents 0.79% during that period, Jordan’s Department of Statistics said today.

Jordan’s inflation rate could finish considerably higher this year, however. The American credit ratings giant Fitch Solutions said in May that it predicts inflation to rise to 3.6% this year. The firm also predicts more social unrest in the kingdom due to high inflation and unemployment.

Jordan has a particularly high rate of youth unemployment, which is around 30%, according to the United Nations. Unemployment is one of the causes of drug addiction among youth.

Know more: In June, the humanitarian organization Mercy Corps reported that Jordan’s fuel prices have not increased considerably due to government fuel subsidies. There were rare massive protests in Jordan in 2012 due to the government lifting of fuel subsidies.

On July 26, Jordan reported that its Industrial Producers' Price index increased nearly 16% from January to May of this year. A producer price index is a measure of inflation based on the prices producers receive for their output.

Editor's note: this article was updated on July 26 to include information on Jordan's Industrial Producer Price index.