The White House wants the Pentagon to bring Israeli tech to link up Arab air defenses, but can progress be achieved without deploying additional American units? 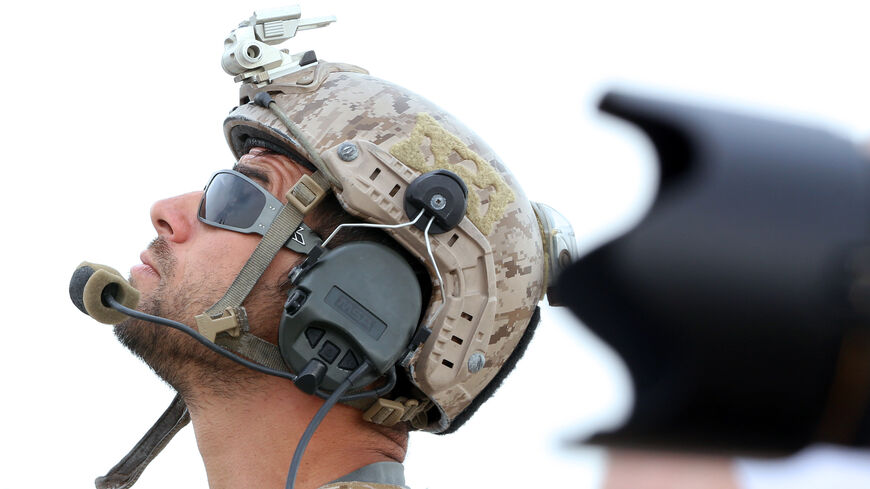 A US soldier looks on during a military exercise as soldiers from the United States, Kuwait and other Gulf Cooperation Council countries participate in the concluding drill of the wide-scale Eagle Resolve 2017 military exercise at Shuwaikh Port, west of Kuwait City on April 6, 2017. - YASSER AL-ZAYYAT/AFP via Getty Images

The Pentagon is pressing ahead with plans to expand military cooperation between Arab countries and Israel as a bulwark against Iran following President Joe Biden’s visit to the Middle East.

Meanwhile, CENTCOM chief Gen. Michael “Erik” Kurilla and two other top commanders of American forces in the region toured military sites in Saudi Arabia, including naval bases on the Red Sea and a Patriot missile battery near Jeddah.

Earlier in the week, Kurilla met with military leaders in Israel and Kuwait to discuss what he described as “a glide path” toward integrating air defense systems across the region in order to better defend against Iran’s missiles and drones.

The proposals are part of a broader blueprint sketched out quietly by CENTCOM over the past year under White House direction, according to current and former officials briefed on the initiative.

The so-called Regional Security Construct is shaping up to be the Biden administration’s first stab at a problem that confounded Obama- and Trump-era policy-makers: how to enable Middle Eastern allies to defend themselves, largely by themselves, as Washington’s forces regroup for future contests with China.

The Pentagon under Defense Secretary Lloyd Austin has yet to elucidate a Middle East strategy, but all signs thus far indicate a minimalist approach. An unclassified road map for CENTCOM’s new regional security initiative lacks the economic and political schemas envisioned as part of the Trump-era bid to revive an “Arab NATO," a source familiar with the planning said.

The current aim is to use existing facilities to train regional military leaders on logistics, air defense, fire support and crisis response as well as air, naval and special operations over the next several years.

“We and our partners have resources for that,” said Votel, now a senior fellow at the Middle East Institute in Washington. “The idea is to stay focused on the big issues and look to find out how we capitalize on areas where there’s obvious agreement on where we can cooperate,” Votel explained.

Like its predecessors, the current US administration has shown no interest in a formal Article 5-style defense agreement with Middle Eastern states despite renewed requests from at least three Gulf capitals since Biden took office, two former senior officials close to the discussions said.

The first draft of the US-UAE strategic framework contained no guarantee of mutual defense and Emirati leaders are waiting to see more concrete proposals in the next round of talks, according one former US official.

Washington’s partners in the Middle East also want to know what contingency plans are in store if Tehran builds a nuclear bomb now that negotiations in Vienna aimed at restraining Iran’s nuclear enrichment appear to have run aground.

“I believe Iran is today in the strongest strategic position they have achieved since the 1979 revolution,” Lt. Gen. Mike Nagata (ret.), former head of US special operations forces in the Middle East during the Obama Administration, told Al-Monitor.

Armed with what is thought to be the region’s deepest stockpile of precision-guided munitions, Tehran and the militias it supports have proven their ability to bomb infrastructure in the Gulf from afar. “Iranian ballistic missiles can now range parts of Europe,” noted Nagata, who is also a senior fellow at the Middle East Institute.

Then-CENTCOM chief Gen. Kenneth “Frank” McKenzie admitted last year he was “very concerned” about Iran’s ability to litter the Strait of Hormuz and the Red Sea with naval mines and how long it would take for the US Navy to clean it up. "We talk about this all the time,” McKenzie told lawmakers last April.

It comes as little surprise that his successor is also focused on prevention. Building maritime cooperation and a shared early-warning network for air and missile defense across Arab states has been on the top brass’ priority list for decades.

Following an apparently cool reception to the idea during Biden's visit Jeddah, and amid disagreements in Arab capitals over how best to move forward, former US military officials say the time is right for a new push.

“Some of the technology and systems that the Israelis have developed are exactly the kinds of capabilities that our Gulf partners need,” Votel told Al-Monitor.

Yet despite the halo of optimism around the Abraham Accords and the absorption of Israel into CENTCOM’s cooperative sphere, the path ahead is riddled with familiar pitfalls.

Each Gulf country has its own priority list of sites it wants defended, and there simply aren’t enough air defense interceptors to go around. Even with a funding boost from Congress, it could take at least a few years before Israel is ready to deliver its own hardware to Gulf states, experts and former officials say.

Meanwhile, Qatar, Kuwait and Iraq — countries geographically situated to provide first-line defense against Iran’s projectiles — remain opposed to working with Israel, at least overtly, due to its policies toward the Palestinians.

Gulf leaders have also historically been reluctant to share sensitive information that could reveal air defense vulnerabilities with neighboring states, precluding any coordination beyond a basic level.

Any hope of achieving CENTCOM’s goals will require diplomatic heavy lifting from the current administration and likely the next one, former national security officials say. It will also require hefty doses of trust and political will from Gulf leaders, both of which appear to be in short supply. It remains unclear if the Biden administration has yet made any progress behind closed doors.

“As important as any high-level dialogue to mend fences might be, what really matters is what happens after the visits by senior US officials,” Nagata told Al-Monitor.

“There will be an element of difficulty in this,” Votel acknowledged. “Of the easier initiatives, on a scale from one to 10, this is still an 8.5 to 9,” the former CENTCOM chief said. “These are not natural things for these countries to cooperate on.”

Bilal Saab, senior fellow and director of MEI's Defense and Security Program, said one possible workaround for the intel-sharing problem could be for CENTCOM to set up fusion cells, or centers in which local military officials share their air defense and other intelligence with American military personnel, who then translate it into recommended actions neighboring countries can take to thwart an impending attack.

This “hub-and-spoke” model is realistic and is likely one of the options Gen. Kurilla’s staff has in reserve, Votel suggested. But it could come at a cost.

“If the US is going to to be the lynchpin, it would put a further demand on some of the air and missile defense forces,” said Becca Wasser, a fellow at the Center for New American Security in Washington, DC.

“The US military does not have enough air and missile defense to protect its own forces, let alone some of the valued assets of regional partners,” Wasser told Al-Monitor.

“Even if the US decides not to send more air and missile defense capabilities to the Middle East, they’re still going to have to send operators — people who are able to process the information. And that’s a further demand as well,” she said.

The Pentagon’s need for air defense units elsewhere in the world is a major impetus behind CENTCOM’s new regional security initiative in the first place. Bringing in additional assets could undercut implementation of Washington’s National Defense Strategy, as did similar decisions during the latter half of the Trump administration.

For now, CENTCOM appears poised to rely on assets already in the region, former US national security officials familiar with the discussions told Al-Monitor.

“It’s less an issue of the US manning batteries or deploying assets," Saab told Al-Monitor, adding, "It’s an issue of agreeing on a shared early-warning system. Once you’ve agreed on that, you agree on fire control."

"That is, not only do you share information, you actually help out your neighbor by intercepting the missile that is incoming at another country. We're not going to get there anytime soon, unfortunately," he said.

In the meantime, placing the US military at the center of regional air defense may help build trust, but it won't be as effective as direct cooperation. “Speed really matters when it comes to these weapons,” Nagata told Al-Monitor.

“The ability to defend against missiles and drone attacks in the region would be exponentially more effective if these various nations were willing to create a truly integrated early-warning system,” Nagata explained.

For the time being, CENTCOM’s new commander will have to make do with fewer resources – a prospect likely to become more daunting if Yemen’s brittle cease-fire or the negotiations in Vienna collapse, or both.

“It’s a zero-sum game. If we’re going to do more in the Middle East, then we have to do less somewhere else,” Nagata told Al-Monitor. “And that will be a painful conversation."

This story has been edited for clarity and updated to include a quote by Bilal Saab.