The Pentagon's anticipated posture review remains largely classified, but it may help prevent shows of force in the Middle East which some have seen as excessive. 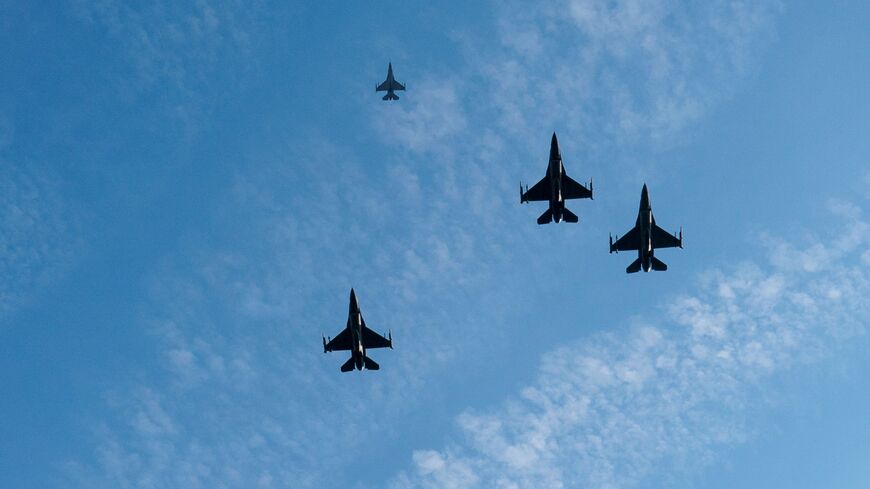 A formation of U.S. Air Force F-16 Fighting Falcons fly over during a centennial ceremony at the Tomb of the Unknown Soldier in Arlington National Cemetery on Nov, 11, 2021, in Arlington, Virginia. - Alex Brandon-Pool/Getty Images

The Pentagon announced it had completed a months-long review of the distribution of its forces around the world on Monday, but defense officials remained mum on what lies ahead for the US military’s presence in the Middle East.

Beyond beefing up airfields in the Pacific and new deployments to Korea — details first reported by the Wall Street Journal — Pentagon officials offered little clarity on what the global posture review actually means the military’s role in the Biden administration’s approach to deterring China.

The contours of the US force presence in the Middle East and Africa require “further analysis,” Mara Karlin, who is filling in as the Pentagon’s deputy policy chief, told reporters yesterday.

“There’s more to come,” Karlin said, adding that that “very much includes very close consultations with our allies and partners around the world.”

What They’re Saying: The mostly-classified document won’t be released in full, though a number of its recommendations have already been carried out, including President Biden’s reversal of a Trump-era limit on US troops stationed in Germany.

In lieu of the anticipated announcement, officials are emphasizing the posture review as a guide for reforming the Pentagon’s internal decision-making process.

A senior US defense official told reporters on the condition of anonymity that the review aims to strengthen civilian oversight on such decisions, a correction the Biden administration sought following a series of foreign policy crises triggered by hasty orders from the Trump-era White House in recent years.

The document will guide advisers to the US defense secretary as he weighs top commanders’ requests for military forces and hardware in their respective regions, Karlin said.

Karlin specifically mentioned the US' recent decision to withdraw air defense systems from Saudi Arabia. “These assets were on a heel-to-toe rotation, and frankly they were beginning to suffer from readiness challenges," she said.

“The idea is to help the department look at various proposals and think, what effect do these have on readiness?,” she said. “And that’s looking across geography, of course, because we have all sorts of competing demands.”

Why it Matters: The new oversight doesn’t bode well for the preferred approach of the current commander of US forces in the Middle East, Gen. Kenneth “Frank” McKenzie.

Under McKenzie, CENTCOM has opted for repeated and visible demonstrations of military force in a bid to deter attacks by Iran.

The approach has drawn criticism both from Defense Department insiders and from members of Congress, who say such deployments take up military resources needed elsewhere in the world and unnecessarily tax military forces. Critics also say the displays have failed to stop attacks by Iran’s proxies, which officials say aim to push American troops out of the region and drive a wedge between Washington and local allies.

“There is no military solution to that,” another senior defense official told reporters earlier this month.

Discussions have been going on for months within the Pentagon about how to "put the combatant commanders on a diet," one person familiar with the matter said.

McKenzie is due to move on from his post, but Karlin’s remarks suggest new reforms to the stovepipe-like request process may also apply to the next CENTCOM commander.

What to Watch For: Don’t expect any major changes to the presence of US forces in the Middle East just yet, but keep an eye out for a continued reduction in B-52 bomber task force overflights and aircraft carrier deployments to the region.

CENTCOM is also likely to continue distributing some of its forces to alternate bases in the region to avoid the range of Iran’s missile and drone attacks.

Finally, keep an eye out for further military cooperation between Israel and Arab Gulf states, as Washington looks to deploy naval and air assets elsewhere.

Know More: Despite the expected changes, Biden administration has been redoubling its assurances to Middle Eastern allies amid concerns that Russia and China could fill Washington’s role in the region.

"Our partners in the Middle East have to understand this," the second defense official said earlier this month. "The United States can do both. We can both prioritize and prepare for the 21st century threat — that is, China as the pacing challenge — and at the same time strengthen and advance our strategic partnerships" in the Middle East.

In Iraq and Syria, and at major bases in the Gulf, American officials say troops aren’t departing anytime soon, and that their presence does not depend on the outcome of ongoing negotiations with Iran.