Explainer: Libya exports oil to Italy after end of shutdown in east

Tribes affiliated with Gen. Khalifa Hifter, who fought the government during the civil war, closed several oil fields due to a dispute with Libya’s state oil company. 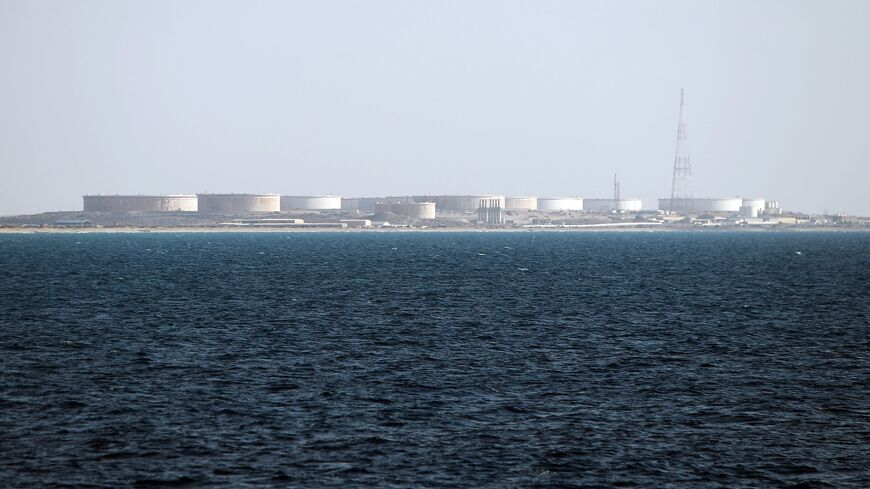 A general view taken on April 9, 2014, shows the oil terminal of Marsa al-Hariga after rebels in eastern Libya ceded control of the oil port, in the first handover under a weekend deal to end a crippling nine-month blockade, the army said. - ABDULLAH DOMA/AFP via Getty Images

Libya has announced a renewed oil exports to Italy, demonstrating the end of a crisis in the country that paralyzed the energy industry.

What happened: The National Oil Corporation said Sunday the tanker Ibela left the port of Sirte in eastern Libya for Italy, the official Libyan News Agency reported. Al-Monitor could not confirm the ship’s departure via shipping data.

Libya’s oil industry had been paralyzed for some time due to a dispute over the leadership of the National Oil Corporation and the unity government. In April, eastern tribes loyal to Libyan National Army leader Gen. Khalifa Hifter shut down several oil ports and fields, demanding the ouster of Prime Minister Abdul Hamid Dbeibeh, The Libya Observer reported.

Dbeibeh took office last year as part of a unity government, which has been governing the country since the civil war between Hifter’s forces and the internationally recognized Government of National Accord ended in 2020.

Hifter took control of Libya’s so-called “oil crescent” in 2016 with the support of local tribes including the Magharba tribe, researcher Alison Pargeter wrote for War on the Rocks.

Why it matters: The disruption had a major effect on Libya’s oil industry. Production fell from more than a million barrels a day at the start of the year to around 550,000 barrels recently, according to S&P Global.

Libya has so far been unable to benefit from rising oil prices resulting from the Russian invasion of Ukraine. The North African country’s diminished oil revenues also coincided with rising food costs, Elia Preto Martini reported for Al-Monitor in June.

The fact that the first oil shipment since the disruption ended went to Italy is also significant. Italy maintained good relations with the Government of National Accord during the civil war.

A potential controversy between the two countries occurred earlier this month when the Libyan government reportedly considered cutting gas exports to Italy to meet local demand. However, the government subsequently denied this.

Also of note is Russia’s role in Libya’s oil exports. The Russian mercenary group Wagner seized several oil fields in Libya during the civil war in an effort to prevent exports to Europe, Foreign Policy reported in an article this month. Russia backed Hifter’s forces in the conflict.

The oil dispute also demonstrated the continued fragility of peace in Libya following the civil war.

Know more: Bengdara said Sunday that the National Oil Corporation is open to financing via the issuing of bonds or private investment — both locally and from abroad. The corporation is funded by the state at present, according to The Libya Observer.