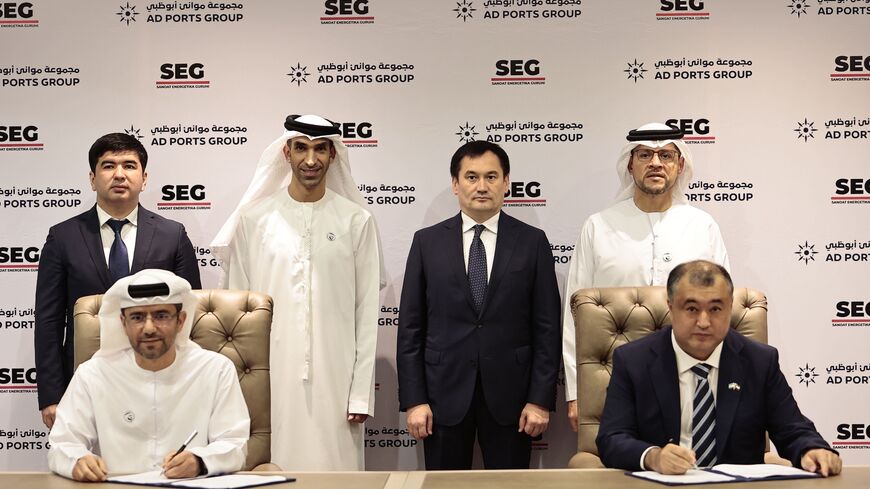 AD Ports signed a joint venture agreement with SEG, one of the largest oil and gas companies in Uzbekistan, to partner on logistics and freight forwarding services, July 6, 2022. Pictured are senior officials from the UAE and Uzbekistan, who were in attendance at the signing ceremony in Tashkent. - Twitter

AD Ports Group and Sanoat Energetika Guruhi (SEG) pledged to work together and freight transport via road, rail and air, customs clearances, the development of inland ports and more. AD Ports Group also opened an office in Uzbekistan, which is the company’s first in Central Asia. They additionally signed a memorandum of understanding on the development of a food storage and transport center in Uzbekistan to boost the country’s trade and help food security in Central Asia, the official Emirates News Agency reported.

AD Ports Group said in a statement that the food hub will be based on Regional Food Hub in Abu Dhabi, which is a conglomeration of food buyers, sellers and distributors. AD Ports added that the hub will be located near the Samarkand International Airport in Uzbekistan, and they will contribute expertise to the project.

Why it matters: Former Soviet Union states in Central Asia are strategically important for a few Middle Eastern states. Israel wants better relations with Uzbekistan and Kazakhstan, for example. Iran is especially interested in boosting ties with Central Asia. The Islamic Republic unveiled a drone factory in Tajikistan in May and inaugurated a railway network with Kazakhstan in June.

The United Arab Emirates and Uzbekistan are not particularly big trade partners at present. In 2020, Uzbekistan exported $79 million to the UAE, while the UAE exported $131 million, according to the US-based Observatory of Economic Complexity.

The Dubai Police also hosted an Uzbek government delegation today, according to the Emirates News Agency.