Egypt has intensified its contacts with Gulf countries to mobilize support in the GERD file, although statements and public support may not be enough to pressure Ethiopia back to the negotiation table. 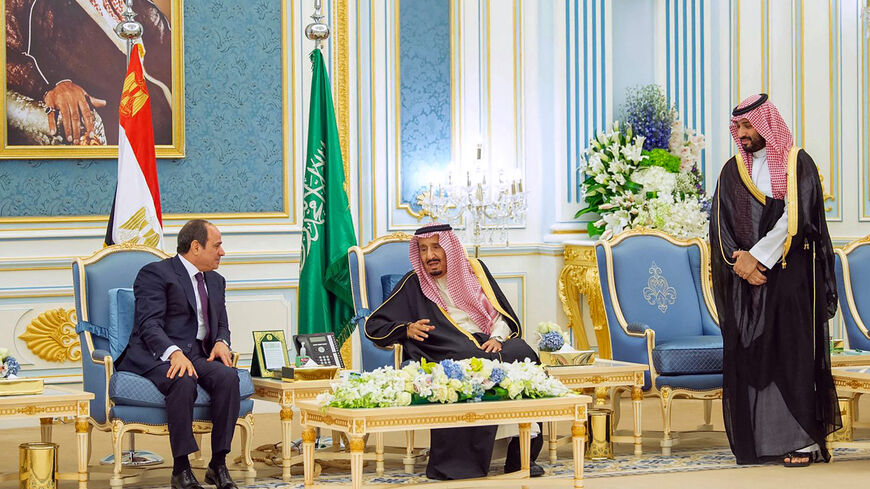 CAIRO — As part of its moves against Ethiopia’s policies related to the Grand Ethiopian Renaissance Dam (GERD), Cairo continues to seek a Gulf role to place pressure on Addis Ababa and reach common understandings regarding the operation of the dam without damaging Egyptian interests in the Blue Nile, which supplies Egypt with 85% of its annual Nile River water share.

In the past two weeks, Egyptian President Abdel Fattah al-Sisi has intensified his activities among Gulf circles as part of efforts to face Ethiopia's unilateral actions in the GERD dispute.

Sisi headed to Oman on June 28 and then to Bahrain the next day.

Sisi’s moves come as Ethiopia prepares to begin the third filling of the GERD reservoir in a unilateral move that was rejected by the two downstream countries, Egypt and Sudan.

The GERD issue was on top of the agenda discussed during the recent Egyptian-Gulf meetings, which also touched on ways to boost cooperation to protect Egyptian and Arab national security from any foreign provocations or challenges.

Also, Gulf countries have expressed their full support for the Egyptian moves against Ethiopia’s actions related to the GERD.

According to a joint statement issued at the end of the meeting between Sisi and Mohammed, the Saudi crown prince reiterated his country’s full support for Egyptian water security as an integral part of Arab water security.

He also urged Ethiopia not to take any unilateral measures regarding the filling and operation of the GERD and stressed the importance of resuming negotiations with Egypt and Sudan to reach a binding legal agreement in this regard.

Speaking at a joint press conference with his Egyptian counterpart, Sameh Shoukry, who accompanied Sisi on his visit to Manama on June 29, Bahraini Foreign Minister Abdul Latif al-Zayani said that Bahraini King Hamad Hamad bin Isa Al Khalifa reiterated during his meeting with the Egyptian president Bahrain’s full solidarity with all of the Egyptian measures aimed at protecting the Egyptian national security from the GERD threats.

Despite Ethiopia’s unilateral actions related to the operation and filling of the dam, Egypt remains committed to diplomacy and negotiations, as it considers that a peaceful solution is the only way to settle legal and technical disputes in accordance with the Declaration of Principles signed between Egypt, Sudan and Ethiopia in March 2015.

At the same time, Egypt seems to adopt strong rhetoric when it comes to messing with its historical rights in the Nile waters.

Ayman Abdel Wahab, deputy director of Al-Ahram Center for Political and Strategic Studies, told Al-Monitor, “The Arab region is witnessing many changes that require a common Arab position regarding security, economic and political challenges, which Cairo seeks to achieve by formulating Arab positions and reaching understandings that protect Egyptian interests in several issues, the most important of which being the GERD.”

Abdel Wahab added, “The Egyptian and Arab moves may not be limited to forming a unified position on the GERD only, as they might include more comprehensive issues, including Arab food security, energy, as well as the Sudanese crisis and the conflicts in the Horn of Africa.”

“It is in the interest of the Gulf now to calm any regional dispute capable of harming its own interests in the region,” he continued.

Abdel Wahab said, “Positive political statements are not enough to change positions or resolve a crisis, as the situation requires actual action and policies that pressure Ethiopia into taking more flexible stances on the GERD. Also, there need to be firm Arab policies that take into account the internal and foreign changes and the complexities of the GERD file, as well as the domestic situation in Ethiopia, where the civil war and internal fighting continue.”

The GERD file has always been on Egypt’s agenda during its contacts with Arab countries. The Arab League has issued several statements in support of Egypt’s and Sudan’s interests and rights in the Nile River against any Ethiopian unilateral moves and threats.

Yet despite the Arab public support for Egypt’s position on the GERD issue, Gulf countries continued to pump more investments into the Horn of Africa countries, particularly in Ethiopia, as part of their efforts to boost food security in the Gulf region in light of the Russian-Ukrainian war.

Gulf investments in Ethiopia, especially by Saudi Arabia and the United Arab Emirates, are mainly focused on the agricultural and manufacturing sectors. A number of these projects are established on lands irrigated by the Nile waters inside Ethiopia.

Meanwhile, Gulf states have played a pivotal role in settling regional conflicts in the Horn of Africa. In 2018, Saudi Arabia was an important player in the Ethiopian-Eritrean rapprochement as it hosted the signing of the historic peace agreement between the two countries.

The UAE also tried to mediate an end to the Ethiopian-Sudanese dispute over the al-Fashqa border area. But these mediation efforts have yet to bear fruit.

Sabah Moussa, an Egyptian journalist specializing in African affairs, told Al-Monitor, “Saudi Arabia and Qatar have powerful tools to intervene, mediate and resolve the dispute between Egypt, Sudan and Ethiopia over the Nile given their good relationship with all the parties to the conflict.”

“I do not expect the UAE to play a successful role, as its attempt to mediate the border dispute between Sudan and Ethiopia have failed to come to fruition, and this could be behind the failure to announce any Emirati positions in support of Egypt in its conflict with Ethiopia,” she added.

“As for the Egyptian-Qatari rapprochement, it could help push Qatar to take a position in favor of Egypt and Sudan. What is more important is to take action to pressure the Ethiopian administration to take more flexible positions and cooperate in the filling and operation of the dam,” Moussa added.

The third filling of the GERD reservoir comes this year at a time when both the international and Arab communities are grappling with economic and security issues, while Cairo seems calmer and does not expect significant damage from the third filling process, nor does it expect its annual share of Nile waters, which it considers a red line, to be affected.

In the meantime, political contacts with the Gulf remain subject to the declaration of decisive GERD-related measures that go beyond diplomatic solidarity statements.