Secretary of State Antony Blinken said the Biden administration “will continue to use our sanctions authorities” if there's no nuclear deal with Iran. 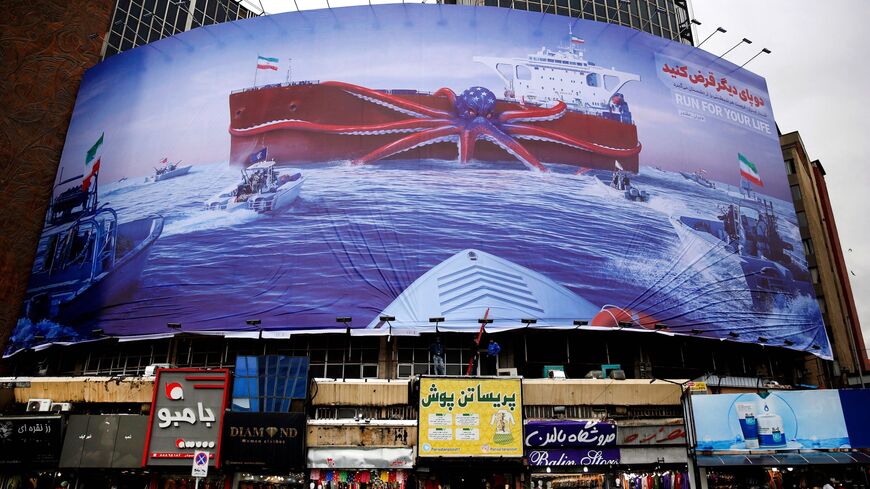 A billboard depicting Iran's Islamic Revolutionary Guard Corps navy units observing a US warship in the Gulf of Oman is seen at Vali-Asr Square in Tehran on Nov. 5, 2021. - AFP via Getty Images

If Iran and world powers fail to salvage the landmark nuclear agreement, the Biden administration warned Thursday that it will continue to use its sanctions authorities to crack down on Iran’s petroleum exports.

The latest sanctions come as talks to revive the nuclear deal, which would ease sanctions on Iran’s oil sector, remain at a standstill. The Vienna-based negotiations on the Joint Comprehensive Plan of Action derailed in March, at least in part due to Tehran’s demand that Washington remove the Islamic Revolutionary Guards Corps from the US list of foreign terrorist organizations.

President Joe Biden campaigned on restoring the 2015 deal that his predecessor abandoned, which offered Iran sanctions relief in exchange for curbs on its nuclear program. Biden's special envoy for Iran, Robert Malley, told lawmakers last month that prospects for a deal were “tenuous at best.”

On Thursday, Secretary of State Antony Blinken said the administration has been “sincere and steadfast in pursuing a path of meaningful diplomacy to achieve a mutual return to full implementation.”

“Absent a deal, we will continue to use our sanctions authorities to limit exports of petroleum, petroleum products, and petrochemical products from Iran,” he said in a statement.

Why it matters: The sanctions announcement comes a day after senior Biden administration officials reportedly told the Senate Foreign Relations Committee in a classified briefing that the administration is prepared to step up sanctions on Iran should the nuclear talks collapse. After the briefing, several senators voiced skepticism about diplomatic efforts to constrain Iran.

Senator Chris Coons, D-Del., told reporters he was “not optimistic about the path forward.” Senator Marco Rubio, R-Fla., told Al-Monitor that he believes Iran is intent on becoming a nuclear power and that “there is no acceptable deal we could strike with the current Iranian leadership."

What’s next: In mid-July, Biden will visit Israel and Saudi Arabia, two countries that share a common rival in Iran. A senior administration official told reporters that Iran would be on the agenda when the president meets with Arab leaders in the Saudi city of Jeddah.

Know more: Tensions between Iran and Israel are running high ahead of Biden’s trip to the region. Following a string of suspicious deaths in Iran blamed on Israel, Ben Caspit reports that Israeli intelligence has foiled multiple Iranian plots to retaliate against Israelis in Turkey.