Turkey's president has added the economy to his list of casualties of the nationwide Gezi protests nine years ago. 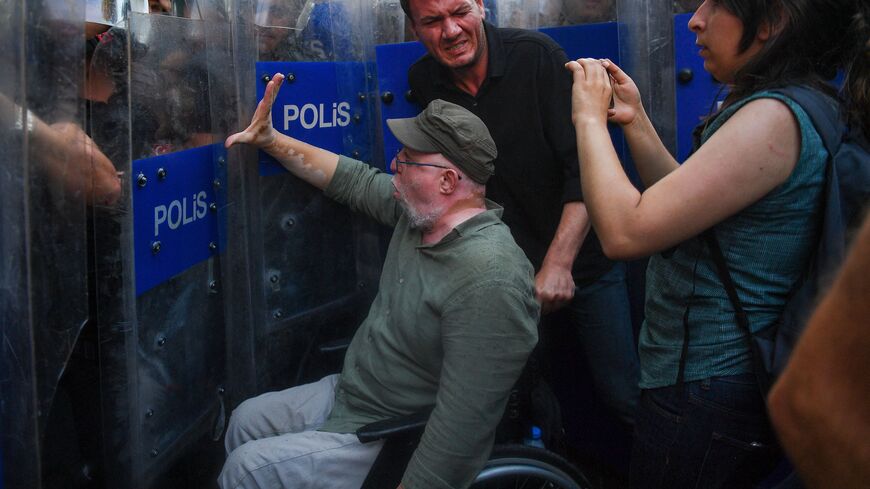 People's Democratic Party deputy Musa Piroglu (L), in a wheelchair, faces Turkish riot police near Taksim Square in Istanbul on May 31, 2022, during the ninth anniversary of the Gezi Park demonstrations. - BULENT KILIC/AFP via Getty Images

ISTANBUL — Turkey’s president has claimed the country’s current economic crisis is at least partly due to nationwide anti-government protests nearly a decade ago. Over the weekend, Recep Tayyip Erdogan identified the Gezi demonstrations, which saw hundreds of thousands take to the streets over several weeks in 2013 to challenge growing authoritarianism, as a factor in the spiraling economy.

“Turkey would have been in a much better place — having a national income of $1.5 trillion —  if not for the betrayals that started with the Gezi incidents,” he told supporters at a Justice and Development Party (AKP) weekend retreat in Ankara. “These betrayals made our country pay a heavy price through the evil triangle of exchange rates, interest and inflation.”

The protests, which erupted across the country in response to the police’s harsh treatment of environmental activists in Istanbul’s Gezi Park, are a favorite target of the president. He stirred controversy last week when he referred to the protesters as “sluts” and repeated a debunked claim that they had defiled a mosque by drinking beer inside.

Erdogan’s remarks came as the beleaguered economy shows little sign of a turnaround ahead of presidential and parliamentary elections due by June next year.

The Turkish lira fell further against the dollar on Tuesday to 16.78 after the president pledged to continue cutting interest rates. Speaking after a Monday cabinet meeting, he said Turkey would slash rates to boost production, exports and employment and added that the war in Ukraine is preventing the “concrete benefits of our economic program.”

The currency has lost more than a fifth of its value against the dollar so far this year after dropping 44% against the greenback last year. The Central Bank has cut interest rates by 500 basis points since September.

Timothy Ash, an emerging markets economist at BlueBay Asset Management in London, described Turkey’s economic approach as “totally and utterly wrong on the diagnosis and the prescription” and said it “risks putting the Turkish economy into a death spiral.”

With the faltering economy, voters are turning away from the AKP, according to recent opinion surveys. Ozer Sencar, head of the MetroPoll polling company, tweeted June 5 that the AKP had lost 40% of its electoral backing since November 2015 and can now count on just 26.5% of voters.

Amid this erosion of support, reviving controversies surrounding the Gezi protests seems to be an attempt to rally the AKP base, according to Ertan Aksoy, a board member of the Social Democracy Foundation. Stoking tensions between the pious and secular parts of society offer a way to do this, Aksoy told the Birgun newspaper.

“Erdogan thinks he can only achieve results [by invoking] the Gezi protests,” he said. “For this reason, it looks like a debate over Gezi will be continued frequently.”

Criminal charges related to the protests have also been used to convict those the government sees as opponents. The highest-profile instance was the life jail term handed to philanthropist Osman Kavala in April for trying to overthrow the government by financially supporting the protests. His conviction was widely condemned as politically motivated, though the government insists Turkey’s courts operate independently.

“I think that the government, which will be further challenged by the economic conditions, has resorted to this Gezi discourse to keep its masses together,” Can Selcuki, general manager of Istanbul Economics Research, told Al-Monitor.

However, the tactic seems to be aimed only at consolidating his base among religious, conservative voters rather than attracting fresh support, he said, concluding, “Today, the government doesn’t have the opportunity to hide or change the economic crisis and financial difficulties. In this sense, we can say that Erdogan is at least trying to prevent the mass he has from leaving.”