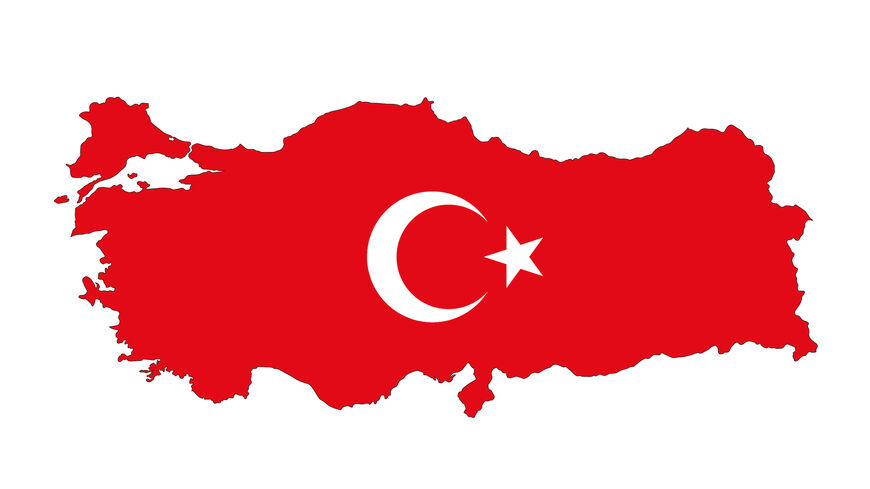 A map of Turkey bears its national flag. - Getty

“You mean Türkiye, right?” Turkish Foreign Minister Mevlut Cavusoglu playfully corrected a journalist who asked him whether “Turkey” would lift its veto from the NATO accession of Sweden and Finland.

“Yes, of course,” replied the journalist, momentarily taken aback. “Should I repeat the question?”

Türkiye’s FM, Mevlut Cavusoglu, reminded a correspondent of the country’s recently changed name as the reporter failed to say “Türkiye” when posing a question regarding Finland and Sweden’s NATO membership bids pic.twitter.com/fgfHQko1TP

Ever since the United Nations officially recognized the name change of Turkey to “Türkiye” (with an umlaut on the u) in the beginning of June, such moments of confusion and correction are common. Visiting dignitaries and other internauts such as NATO Secretary General Jens Stoltenberg obligingly refer to Türkiye in their opening speeches, only to fall back on the familiar Turkey as they spontaneously reply to questions. Even Cavusoglu, who lobbied fervently for the name change requested by President Recep Tayyip Erdogan, slips once in a while. After all, the country has been called Turkey for 10 decades, ever since its foundation in 1923.

Locally, the reactions to the name change vary. For many Turks, it's just another distraction invented by Erdogan to draw attention from the worsening economy. After all, they have been calling the country Türkiye, with little worry for what others called it. Others will be quite glad to travel abroad from Türkiye rather than from a country that shares its name with a bird many people eat at Christmas and Thanksgiving. The shared name is the butt of many jokes and parodies, such as the 1983 musical in which Mel Brooks imitates Hitler wanting nothing but peace — "a little piece of Poland" and "a little slice of Turkey.”

One of the unexpected advocates of the change is Orhan Pamuk, the winner of the 2006 Nobel Literature Prize. “Now, after this decision, when English speakers say Türkiye, they will not think about that bird that is eaten at Christmas. I’m very happy about that,” the author, whose characters often carry elaborate names that foreshadow their future or describe their character, told Financial Times.

The brunt of the name-change recognition efforts have fallen to the Turkish Foreign Ministry, which has notified the United Nations, NATO, the World Trade Organization and the European Union. Cavusoglu wrote to UN Secretary General Antonio Guterres that the government of the Republic of Türkiye will use “Türkiye”  to replace several variations including “Turkey,” “ Turkei” and “Turquie” that have been used in the past to refer to the country. A spokesperson for the UN said that the move was not for the UN to accept or reject. "Countries are free to choose the way they want to be named. It doesn't happen every day but it's not unusual,” said Stephane Dujarric.

Once the UN recognized the change, Turkey’s national broadcaster and the semi-official Anadolu Agency dutifully reported progress on this or that international organization’s first document bearing the name Türkiye instead of Turkey. Embassies in Ankara are gently transitioning to Türkiye, integrating the u with umlaut into their official correspondence. The Netherlands, which dropped Holland three years ago, was among the first to do so, as was the United Kingdom.

The Foreign Ministry’s own website, on the other hand, remains a strange hybrid: While titles of ministers, recent press releases and some of the most-used pages have transitioned to the new name, some of others, including one on Ankara’s relations with the European Union, are locked in old-speak.

The change started with a midnight decree on Dec. 4, 2021, bearing the signature of President Erdogan, clarifying that the rebrand was to "preserve and glorify the culture and values ​​of our nation." It read, "The phrase Türkiye represents and expresses the culture, civilization and values of the Turkish nation in the best way."

Erdogan’s request was not new. In the 1990s, some Turkish exporters tried to standardize the "Made in Türkiye” brand on exported goods, but there was no unity nor endorsement from other state organs. In 2020, the Turkish Exporters Assembly tried again, but, again, implementation remained spotty.

After last December's decree, Fahrettin Altun, Erdogan’s communication tsar, lauded the decision within minutes. “Another valuable step has been taken to strengthen the Turkish brand," he tweeted.

Ironically, one of the first notable official documents in which “the strengthened new brand” was used was the country’s opinion on the infamous Kavala case. On Jan. 19, the Council of Europe received an explanation of why the human rights activist and philanthropist Osman Kavala was kept behind bars as the pan-European rights body prepared to launch a disciplinary process against the country.

Meanwhile, Turkey’s English-language broadcaster TRT explained that the country, which rose from the ashes of war-defeated Ottoman Empire after a three-year war of independence, called itself Türkiye in 1923: “Type Turkey into Google, and you will get a muddled set of images, articles, and dictionary definitions that conflate the country with Meleagris — otherwise known as the turkey, a large bird native to North America — which is famous for being served on Christmas menus or Thanksgiving dinners. … Flip through the Cambridge Dictionary and turkey is defined as something that fails badly or a stupid or silly person."

Turkey’s tourism sector, one of the pillars of the name change, immediately changed its English-language content.

But Erdogan’s insistence on stamping "Türkiye" all over the country’s valuable assets may have gotten out of hand, even for him. Speaking at a ceremony marking the launch of the new communication satellite, Erdogan said that the country’s national carrier, Turkish Airlines, will be branded as Türkiye Hava Yollari (“hava yollari” means “airlines” in Turkish and is quite a task to pronounce for any non-Turkish speaker, who will doubtlessly go on calling it with its abbreviation, THY).

“Turkey no longer exists. It is Türkiye,” he said, adding that the THY fleet, among the top 10 largest airlines in the world, would be repainted with the new name.

Meral Aksener, the acid-tongued leader of the opposition IYI Party, admonished him immediately. “Go on with such nonsense," she tweeted. "We will change that, too, when we come to power.”

Erdogan changed his mind again in the face of criticism, saying the airline will be called internationally by its Turkish name “Türk Hava Yolları,” leading Aksener to tweet that it was a virtue to turn back from a mistake. “One can only hope that Erdogan would practice this newfound virtue on the horrible economic management and the travesty of the political system he forced on us.”

Editor's note: Al-Monitor, which follows the Associated Press style guide, will continue for now to use Turkey, though we have been advised to switch to Türkiye by conscientious readers.