The funeral of a prominent religious leader has showcased the growing influence of religious groups in Turkey. 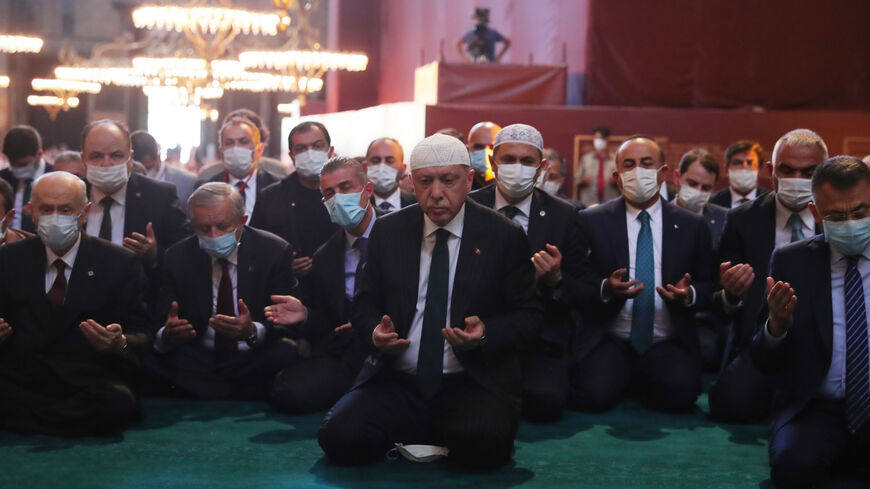 The high-profile funeral of a leader of an influential religious order shows how religious groups have flourished under the rule of the Justice and Development Party (AKP), exposing deepening faults between the Turkish public secular and Islamist segments.

Mahmut Ustaosmanoglu, a sheik and longtime leader of Turkey’s influential Ismailaga order, died on June 23 at the age of 93. Tens of thousands flocked to his funeral service held on June 24 in Istanbul, including Turkey’s President Recep Tayyip Erdogan, Interior Minister Suleyman Soylu and several other ministers.

According to Mehmet Akif Koc, a researcher and a PhD candidate on Middle Eastern studies, the high profile funeral was an indication of how religious groups have gained prominence under the AKP, which came to power in 2001.

“Since the 2000s, [the religious orders] have gained an important central power in Turkish politics together with the AKP government,” Koc told Al-Monitor, stressing that religious orders are not a new phenomenon, as their clout over society harkens to the Ottoman era.

Ismailaga’s closeness to the AKP government is widely known. Erdogan, some of whose family members were also present at the funeral, was one of the pallbearers, right behind the order's reported new leader, 92-year-old Hasan Kilic. Ahmet Mahmut Unlu, also known as the Cloaked Ahmet Hodja, a senior leader of the order, loudly campaigned for AKP during the 2018 local elections while Ismailaga openly endorsed the government.

Members of Turkey’s opposition were also present at the funeral, including former premier Ahmet Davutoglu. He stood right next to Soylu during the funeral prayer, drawing curious glances from observers remembering their recent heated exchanges.

Ustaosmanoglu's funeral was a platform “where the Islamist and conservative segments showed off," Koc opined. "Both the ruling and conservative opposition parties attended the ceremony, underscoring that this religious base cannot be easily sacrificed.”

One group was missing from the massive crowd: women. Right after the announcement of Ustaosmanoglu's death, the order called on its women disciples not to attend the service, noting the shiek’s “widely known” ideas against women's participation in funeral services. The call prompted an outcry among some secular segments of society, with hundreds taking to Twitter to lambast the order’s announcement. The backlash prompted some of his followers to defend the decision by saying that the call was intended to “protect women from the crowd.” Ustaosmanoglu’s hard-line approach to women has already been controversial for many in Turkey, as the preacher once advised his followers not to send their daughters to school beyond primary education.

Against this backdrop, one opposition politician's attendance sparked wide anger among the Republican People’s Party (CHP) support base. Images of CHP member Ilhan Kesici speaking to Ahmet Mahmut Unlu, who is known for being polygamous, forced the party to stress that the politician went to the funeral by his own will.

According to Koc, however, one prominent CHP member was notably absent from the funeral. “What was surprising for me was that Istanbul Metropolitan Mayor Ekrem Imamoglu, who aspires to conservative votes, did not attend the funeral,” he said.

Some also have questioned the funeral service itself. Journalist Can Atakli argued that Erdogan’s attendance of the funeral of someone who is known to be staunchly against the secular state was unconstitutional, as it is the president’s responsibility to safeguard the secular republic. A prominent Kemalist association filed a lawsuit against the funeral, arguing that the service was a violation of Turkish law.

“The main reason for the reaction to the funeral within the secular masses, I believe, is Ustaosmanoglu's views on women and the social base of Ismailaga, which is so intertwined with the ruling party,” Koc opined, referring the order’s promotion of hard-liner Islamic restrictions.

According to Sinan Ciddi, a senior nonresident fellow at the Foundation for Defense of Democracies in Washington, DC, “The public display of condolence messages by the country’s political leadership and their relative silence” on court rulings that let femicide convicts off with relatively light jail terms are “are more than telling.”

Turkey’s religious orders have come under limelight in recent years. Earlier this year, 19-year-old medical student Enes Kara took his life in January because he could no longer endure the religious pressure by the Islamic Nur order his family had forced him to join. With elections scheduled for June 2023, many observers are now questioning the future of influential religious orders that are so intertwined with that of the current government.