A woman’s claims that she was married at 6 has raised questions about the role of Islamic orders and their influence in the state. 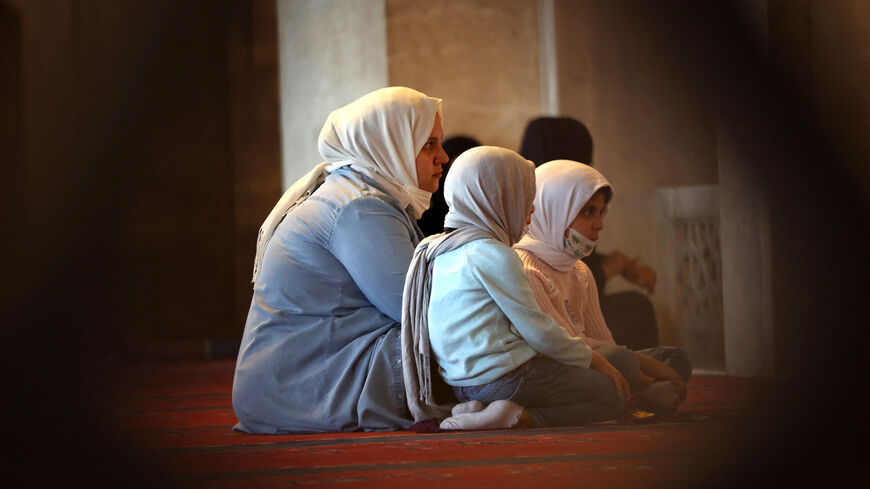 A woman and two young girls attend the Eid al-Fitr prayer at Kocatepe Mosque in Ankara on May 13, 2021. - ADEM ALTAN/AFP via Getty Images

ISTANBUL — Government ministers and opposition leaders in Turkey have spoken out over a woman’s claims that she was married off at the age of 6 in a scandal that has shone a spotlight on the country’s religious sects.

The claims emerged in divorce and criminal proceedings lodged last year by the woman, now 24. She alleges that her father, who heads a foundation linked to the influential Ismailaga community, married her to a 29-year-old sect member as a child and that she was sexually abused by her husband from that age.

Revealed in the left-leaning Birgun newspaper on Saturday, the allegations have led to outrage among leading politicians and the public.

“The information that one of our children was subjected to abuse at the age of 6 has deeply shaken consciences,” Mustafa Sentop, parliament speaker and the most senior figure in the ruling Justice and Development Party (AKP) to comment on the case, tweeted Thursday.

“The case was brought to the judiciary and the Ministry of Family and Social Services was also involved. … We will follow the process so that all aspects of the incident are clarified and those responsible receive the heaviest punishment.”

During a budget debate in parliament, Ozgur Ozel, deputy leader of lawmakers from the opposition Republican People’s Party (CHP), said the claims had “shaken” Turkey and called for a minister to answer legislators’ questions on the case.

“As the rulers of this country, they need to come out and say something … in this assembly,” he said.

Many political and societal groups called for various religious sects, with adherents estimated in the millions, to be closed.

“This is the dire consequences of the AKP’s management approach, which has opened up state opportunities to cults and communities since its coming to power,” the Ataturkist Thought Association, which promotes the secularism of Turkey’s founder, said in a statement.

The Ismailaga community is one of many that fall under the umbrella of the Naqshbandi-Khalidi order, a Sufi branch of Sunni Islam that also encompasses sects such as the Menzil, Suleymancilar and Iskenderpasa. President Recep Tayyip Erdogan is said to have been a follower of the latter and to have retained ties to the group.

The funeral of the Ismailaga sect’s longtime leader earlier this year was attended by Erdogan and Interior Minister Suleyman Soylu.

Under the AKP’s 20-year rule, religious sects, known as tarikats, have further extended their influence into education, where they operate inexpensive student dormitories in addition to running Quran courses for children.

The sects’ role in student accommodation came under criticism following a fire at a Suleymancilar-run school dormitory in Adana, southern Turkey, in November 2016 that left 11 children and a staff member dead. Medical student Enes Kara committed suicide in January after describing the hours of prayer and religious tutoring he was forced to undertake at a tarikat-run dorm.

The Gulen movement rose to become the most powerful sect under Erdogan’s rule, infiltrating its members into branches of the Turkish state as it allied with the AKP. A split in the early 2010s ultimately led to a 2016 coup attempt widely blamed on Gulenists.

Many believe the vacuum left by the expulsion of tens of thousands of suspected Gulenists from Turkey’s judiciary, police and other state organs has at least been partially filled by the members of other tarikats.

A year after the coup attempt, CHP lawmaker Mahmut Tanal said the Menzil sect had gained significant sway in the interior, justice and health ministries. “Police officers take references from the Menzil in order to be appointed and promoted,” he said. “How can such a thing be possible?”

The sex abuse case is tinged with claims that elements within the state have attempted to soften its ramifications.

Following the complaint of the alleged victim, identified only as H.K.G., an Istanbul prosecutor prepared an indictment on Oct. 30 against her father Yusuf Ziya Gumusel, head of the Ismailaga-affiliated Hiranur Foundation, his wife and the alleged abuser. The prosecution is calling for 27-year jail terms. The accused deny the allegations.

Sera Kadigil, a lawmaker for the Workers Party of Turkey, filed motions with several government ministries, one questioning if there had been an obstruction of justice in the case. She noted that concerns about H.K.G.’s age had been raised a decade earlier and asked why the suspects were not being held in prison while the investigation was underway.

Canan Kaftancioglu, head of the CHP’s Istanbul branch, posted photos taken from the Twitter account of a former AKP district mayor, İsmail Erdem, showing him meeting Gumusel in 2016 and praising his foundation.

In a parliamentary motion, Huseyin Kacmaz of the Peoples' Democratic Party demanded to know why an investigation had not been launched 10 years ago.

“This case was intended to be covered up and this systematic violence continued for years,” he said. “Therefore, it is essential that those who covered up this crime as well as the perpetrators of this crime are exposed.”