The Biden administration publicly endorsed a plan to sell Turkey fresh fighter jets just a day after Ankara dropped its objection to Sweden and Finland joining NATO over ties to Kurdish groups. 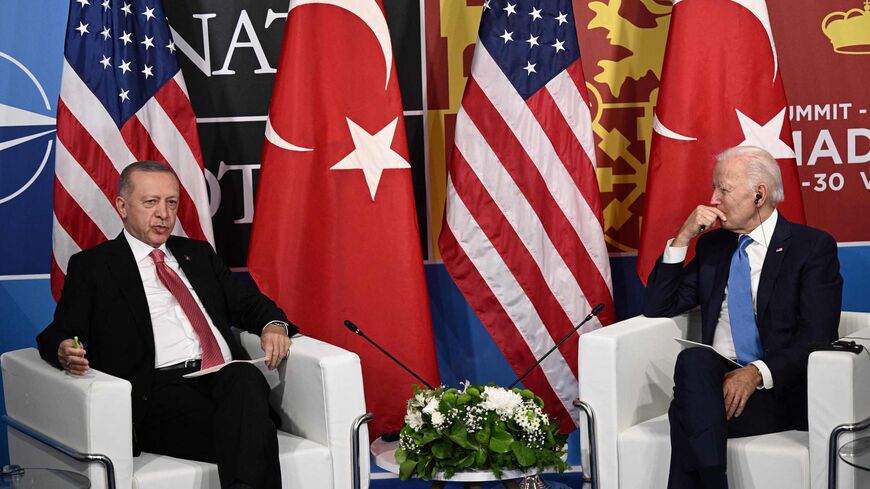 US President Joe Biden (R) listens as Turkey's President Recep Tayyip Erdogan speaks during a bilateral meeting on the sidelines of the NATO summit at the Ifema congress center in Madrid, on June 29, 2022. - BRENDAN SMIALOWSKI/AFP via Getty Images

Just a day after Turkey said it would accept Sweden's and Finland’s bids to join the NATO alliance, the Biden administration reaffirmed its intent to sell dozens of F-16 fighter jets to Ankara to upgrade its existing fleet.

“These plans are in the works. As you know, they need to be worked through our contracting processes,” Wallander said during a conference call.

“The United States supports Turkey’s modernization of its fighter (aircraft) fleet because that is a contribution to NATO security and therefore American security,” she said.

Why it matters: Turkey submitted a formal request to buy 40 new Lockheed Martin-made block 70 F-16s as well as some 80 modernization kits for its existing fighters last September.

The planned $60 billion deal is seen as a key step toward repairing strategic ties between the two NATO allies after Washington expelled Ankara from the F-35 Joint Strike Fighter program in 2019.

The dispute arose after Turkey purchased Russia’s S-400 missile defense system in 2017, alienating powerful lawmakers in the US Congress and drawing limited US economic sanctions on Ankara’s defense industry.

Turkey’s President Recep Tayyip Erdogan said last October that the Biden administration offered the F-16 sale as a way to reimburse Ankara for some $1.4 billion it had paid toward F-35s that were never delivered. US officials pushed back on that at the time, saying no financing proposals had been agreed upon.

Wallander’s comments today marked the administration’s first clear public statement of support for the F-16 sale, which is likely to face opposition from key lawmakers in the US Senate, chief among them Democratic Sen. Bob Menendez of New Jersey. Congress has the power to block the sale within 30 days of being formally notified, which has yet to happen.

President Joe Biden met with Erdogan on the sidelines of the NATO summit in Madrid today, but the two did not discuss the F-16 proposal in front of the cameras.

Instead, Biden thanked Erdogan for agreeing yesterday to support Sweden's and Finland’s bids to join NATO after weeks of impasse due to Turkey’s objections over the Nordic countries’ alleged support for Kurdish militant groups deemed by Ankara to be terrorist organizations.

The three countries signed an agreement yesterday outlining steps to be taken against the Kurdistan Workers Party (PKK) — which is recognized as a terror group in Ankara and Western capitals alike — and its Syrian offshoot, the People’s Protection Units (YPG).

The YPG has been instrumental in the US-backed military campaign to defeat the Islamic State in Syria and insists it poses no threat to Turkey, but Ankara has long demanded Washington and other Western governments withdraw their support for it.

Turkey has also repeatedly requested the United States lift congressionally mandated sanctions on Ankara’s defense industry imposed over the S-400 purchase. However, the Biden administration has refused to bend on those issues, and officials have sought to avoid getting dragged into Erdogan’s bargaining over NATO’s expansion in Northeast Europe.

“The US did not offer anything to Turkey and was not asked for anything by Turkey," a senior US official told reporters yesterday of the trilateral agreement.

President Biden voiced support for the F-16 proposal during a press conference in Madrid on Thursday, adding that there was “no quid-pro-quo” with Turkey and that the sale requires Congressional approval. “I think we can get that,” Biden said.

But support on Capitol Hill is likely to hinge on political dynamics in Ankara as well. Erdogan’s government threatened last month to launch yet another military assault against the YPG in Syria, raising concern among top lawmakers.

Biden administration officials have signaled disapproval for the planned operation both publicly and in private discussions with the Turkish government. A White House official told Al-Monitor on the condition of anonymity on Tuesday night that the United States remains firm in its opposition to Turkey’s proposed military operation.

Just what leverage the Biden administration might bring to bear against its NATO ally should Erdogan order a new attack on Syria’s Kurds at such a sensitive time for the Western alliance, however, remains to be seen.

What’s next: Once the accession protocols for Sweden and Finland to join the NATO alliance are signed, member states must approve them, in many cases via legislature, before they can be sent to the United States to complete the process.

This story was updated to include a quote from US Pres. Joe Biden in Madrid on Thursday.