Palestinians divided over cancelation of concert by gay singer 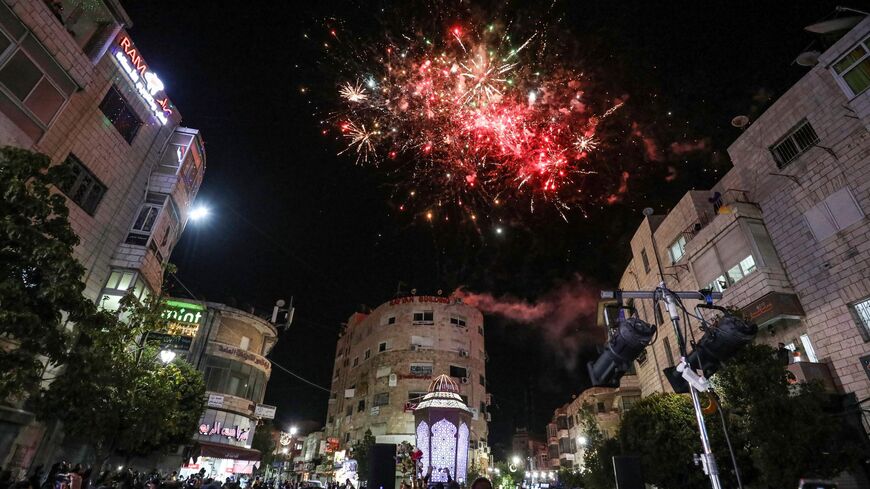 Palestinians gather in a square by a giant lantern as they watch fireworks lighting the sky after sunset on April 12, 2021 as people celebrate start of the Muslim holy fasting month of Ramadan. - ABBAS MOMANI/AFP via Getty Images

On June 17, Palestinian youth in the city of Ramallah, in the central West Bank, prevented singer Bashar Murad from performing over what they called his support of homosexuality in Palestine.

In a story on his Facebook page, Murad, who is gay, announced the cancellation of the live show at al-Mustawda3 cultural space in Ramallah, without explaining the reasons.

But a video taken inside the cultural space that went viral on social media showed a group of young men asking employees at al-Mustawda3 to cancel the show because the performers were gay.

He added, “We came to you very respectfully to communicate the message that we will not allow these perverts to pass. We ask you not to test our patience when it comes to things God prohibited, and we will not allow anyone to dare to violate our honorable religion, this is a red line,”

The date of the show coincided with the killing of three Palestinian youths by Israeli forces in the Jenin camp. Jarrar said, “While the young men of Jenin are sacrificing their lives for the beloved homeland, a suspicious group tried to hold a gay party in Ramallah.”

Jarrar and the group of men with him were widely praised on social media.

All parties involved — the young men who protested the concert, Murad, al-Mustawda3’s management, and even the Palestinian police — all refused to comment to Al-Monitor.

In a June 17 post on his Facebook page, Jarrar, who is the son of prominent Hamas preacher Bassam Jarrar, said that his group received information that an annual gay party was to be held in Ramallah. After they arrived at the site, "we were surprised by gay group mocking our true religion and throwing rubbish and stones while we were performing the Maghrib prayer in front of the venue, where the event was set to be held.”

Murad is a singer and songwriter from Jerusalem. In a 2019 interview with the BBC, he said that he tries to shed light on issues such as gender equality and LGBT rights, and to convey the idea that Palestinian society is diverse, rich in stories and talents, and much deeper than the Israeli occupation. “I understand it's a work in progress to open up people's minds to new ideas,” he said.

On social media, the majority of Palestinians welcomed the show’s cancellation, while others criticized the young people’s interference.

Speaking to Al-Monitor, Palestinian author and political analyst Nihad Abu Ghosh reiterated his condemnation of the cancelation of the show, which he had published on Facebook, saying, “Those who appoint themselves as Allah’s agent on earth and the guardians of His boundaries are practically taking the law into their own hands.”

Next, he said, "those who claimed to be representatives of the youth in Ramallah can even go after an unveiled girl or a student walking in the street with her colleague or a café where men and women are welcomed together. It won’t take long before they perhaps start their acid attacks on girls who go to universities and schools,” he added.

Abu Ghosh continued, “The strange thing is the PA’s suspicious silence about the violation of its area of competence and confiscation of its role. It repeatedly remained silent on those who take the law in their own hands. … The worst is that there are those who think that events like the concert at al-Mustawda3 are more dangerous on Palestinian society than the occupation.”

In 2019, the PA banned Al-Qaws for Sexual and Gender Diversity in Palestinian Society, a Palestinian civil organization that works to protect the rights of the LGBTQ community, and prevented it from holding any activities in the West Bank.

Commenting on the canceled event in Ramallah, Al-Qaws wrote in a post on its Facebook page on June 21, about the “wave of violence, incitement, distortion and societal threat in the name of religion, customs and traditions.”

The organization added that the cancellation is "particularly new in terms of its method and tools that affect specific individuals working in the Palestinian political and cultural fields, and that it targets institutions simply for hosting what is being seen as gay.”