Palestinian female engineer Haya Barzaq is documenting residential houses with special architectural styles in the Gaza Strip to track the evolution of architecture in the besieged enclave. 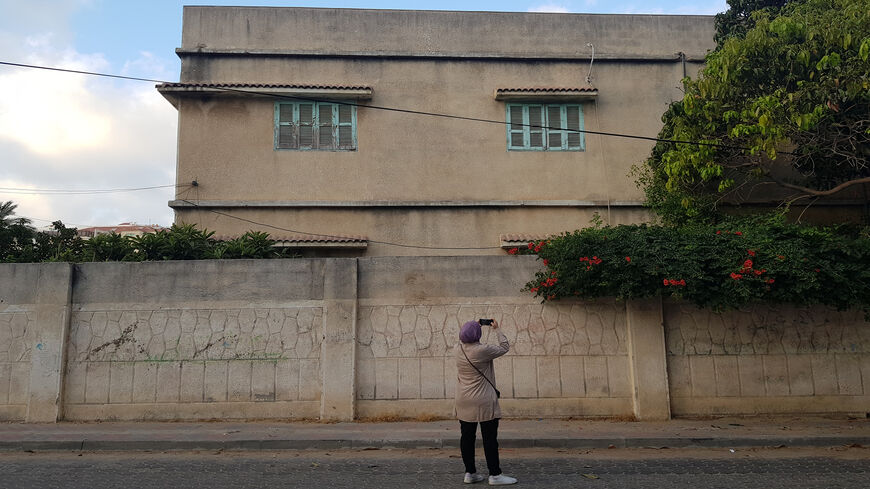 In a relatively quiet neighborhood, Haya Barzaq, a young female engineer, takes photos of beautiful houses in the old part of Gaza City using her cellphone camera, after asking the owners’ permission. She is doing this as part of a personal initiative to document houses and their different architectural styles, to be used as reference for tracking the evolution of architecture in Gaza City.

However, Barzaq has encountered several difficulties. Many homeowners and residents fear Barzaq is documenting their dwelling to turn them into an archaeological landmark. If their homes end up on the Palestinian heritage lists by the local authorities, they may lose their right to them.

Some residents are also skeptical about Barzaq taking photos of their homes amid the unstable security situation in the blockaded Gaza Strip.

However, as soon as she explains her initiative, they allow her to proceed and guide her to more homes with similar architectural traits. The elderly are often the most excited to tell the historical narratives of their homes.

Barzaq's mother accompanies her on the documentation journey, and helps her take the perfect shot by removing trash or weeds.

Barzaq has been passionate about architecture and exploring ancient places since she was young, and she studied architecture at the Islamic University. “In 2017, I started working at a construction company, where I was required to move between different sites. This offered me a great opportunity to explore the different architectural styles of houses in Gaza,” she told Al-Monitor.

She developed a great interest for the internal details inside those houses. “I was very intrigued by the stories of the houses in Gaza built at the end of the British Mandate and during the Egyptian rule,” she said. “I had already started documenting houses dating back to the Ottoman and Mamluk periods, which are houses with dome-like roofs. I then decided to document residential houses in different architectural styles.”

Barzaq discovered that the style of the houses built during the British Mandate and Egyptian rule is similar to the popular Bauhaus architectural style found in Europe. But in Gaza, this style was modified to adapt to the Gazan climate and society.

She explained that these houses have several aesthetic features that have become rare in modern architecture, such as colored cement tiles that were very popular in the 1940s and which went out of fashion in the late 1970s, as well as iron doors with distinctive decorations and wooden windows.

She added, “I was captivated by the sophisticated art items in these homes, which were mostly handmade. I was also fascinated by some other details in contemporary homes, most of which have a semi-circular balcony overlooking a garden with various types of plants.”

The first person who urged Barzaq to pursue her passion and photograph houses and document information about them in writing was her professor at the Islamic University’s Department of Architecture, Salem al-Kidwa.

Kidwa told Al-Monitor, “This documentation work is very important in light of the risks these houses face due to demolition works. Also, an increasing number of people are abandoning these old houses to live in apartments in high-rise buildings.”

He noted, “These homes reflect a famous contemporary architectural style, which is the Bauhaus style. It is important to document this European style in Palestine, mostly found in some coastal cities.”

Barzaq’s initiative has been praised on social media, and some even contacted her to share some details of some of the houses she documented. She now aspires to put her photos in a book or to create an archive on a website, especially since these homes are at risk of collapsing and many of them have already been destroyed in the successive wars on the Gaza Strip.

“Before the Israeli offensive in May 2021, I took some photos of houses on Al-Wehda Street. These were damaged or even leveled to the ground during the war,” she said. “The house of the Abu al-Awf family, who were killed in that war, had beautiful aesthetic architectural shapes and forms. I managed to take some photos of it just a few weeks before the war.”