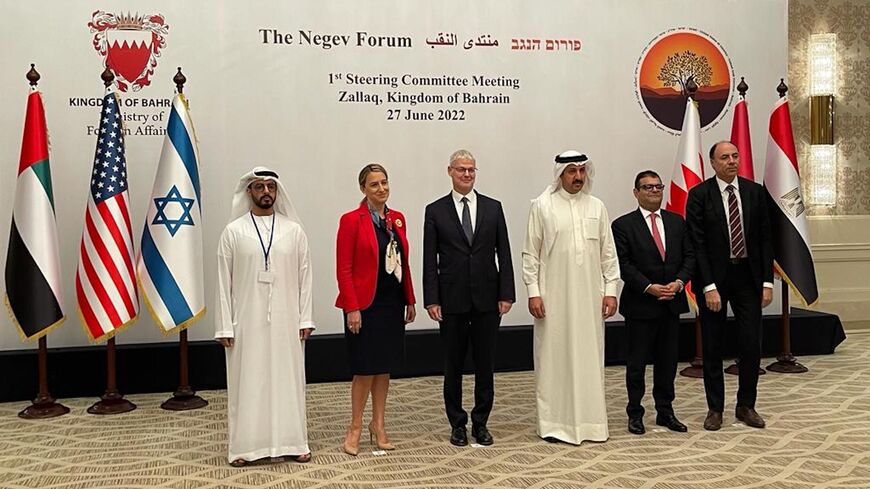 The March Negev Summit convened at the Sde Boker village, where Israel’s first premier, David Ben Gurion, lived and is buried. It was a first-of-its-kind meeting, bringing together foreign ministers from Israel, the United States, the Emirates, Bahrain, Morocco and Egypt. There, the six founding countries vowed to take action to bring security, prosperity and stability to the Middle East and called on more countries in the region to join the effort.

They also set up six working groups, each to be chaired by one of the participants. Each of the six groups — regional security, food and water security, energy, health, education and tolerance and tourism — is expected to meet two or three times a year.

A statement issued by Israel’s Foreign Ministry read, “The member states discussed the operative ways in which to promote cooperation in a manner that will lead to tangible achievements for the region and its people, including, among other things, through the new forum created by Foreign Minister Yair Lapid in March of this year.”

It went on, “The meeting is of particular importance in light of US President [Joe] Biden's expected visit to Israel and the Middle East and the American commitment to expanding the circle of peace.” Biden is expected to visit Israel, the West Bank and Saudi Arabia from July 13 to July 16.

The statement further noted, “The convening of the committee once again exemplifies the importance that the countries see in promoting ties and continuing to conduct the Negev Forum as a platform for promoting solutions to shared challenges.”

The meeting in Bahrain comes a day after The Wall Street Journal reported on a major security meeting convened by the Biden administration in the Egyptian resort city of Sharm el-Sheikh last March. Reportedly, senior security officers from Israel, Saudi Arabia, Qatar, Egypt, the United Arab Emirates, Bahrain and Jordan participated, including IDF Chief of Staff Aviv Kochavi and his Saudi counterpart Gen. Fayyadh bin Hamed Al Ruwaili. Frank McKenzie, then the head of the US Central Command, headed the American delegation.

The report claimed it was the first time that such high-ranking officers from Israel and Arab countries had met under US military auspices and that an understanding in principle was reached on methods for rapid notification of aerial threats. Alerts would be transferred via phone or computer and not through a US-style military data-sharing system.

The report noted that such cooperation between Israel, Saudi Arabia and Qatar was unthinkable for decades but after the signing of the Abraham Accords and in light of concerns over Iranian aggression is now possible.

While Israel and Saudi Arabia are not expected to normalize ties soon, reports indicate that Biden could announce more rapprochement steps during his regional visit.

Jerusalem places great importance in rapprochement with Saudi Arabia as part of its efforts with Washington to build up a regional anti-Iranian alliance. Defense Minister Benny Gantz said this morning that Israel will work with world powers to have an impact on any nuclear deal that may emerge from their negotiations with Iran, noting, "With the expected or possible resumption of the nuclear talks, we will continue to work together with the United States and other countries in order to make our position clear and influence the crafting of the deal — if there is such."