After failing to form a national majority government, Iraqi populist cleric Muqtada al-Sadr asked his party members in parliament to prepare to resign. 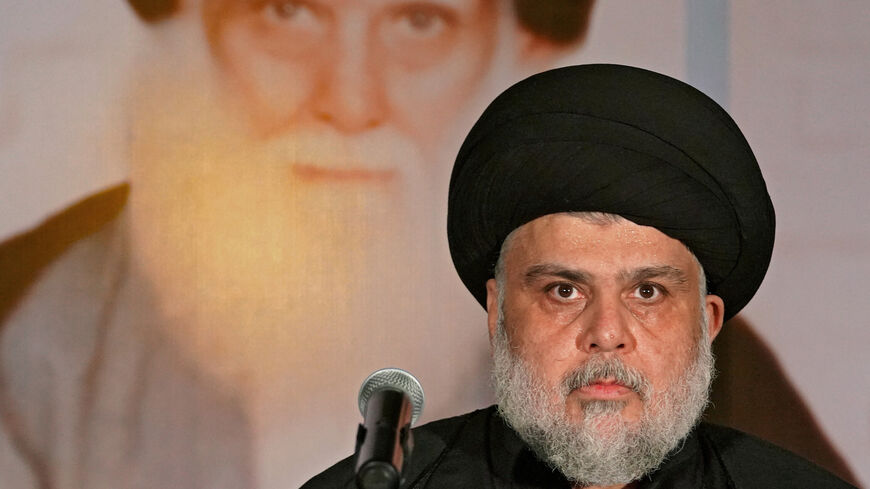 Leader of the Sadrist Movement Muqtada al-Sadr insisted in a public speech on forming a national majority government or otherwise his bloc will withdraw from parliament.

“We have two options: either the opposition or [withdraw],” Sadr said.

Sadr won the largest bloc in the October 2021 elections, gaining 74 seats. He formed an alliance with the Sunni Sovereignty Coalition led by parliament speaker Mohammed al-Halbusi and the Kurdistan Democratic Party led by Massoud Barzani.

He has been calling for a national majority government, rejecting the Coordination Framework that includes Nouri al-Maliki’s State of Law and the Iran-backed Fatah bloc.

Sadr was not able to form a government due to the Coordination Framework's success in forming a blocking third to prevent the selection of a president — a task requiring two-thirds of parliament members.

The country has been in a political deadlock since then.

"If the Sadrist bloc is an obstacle to the formation of the government, all the representatives of the bloc are ready to resign from the House of Representatives and will not disobey me," Sadr said.

"Iraq needs a government with a majority that serves its people," he said. "So, let the Sadrist bloc's representatives write their resignations from the House of Representatives in preparation for submitting them to the parliament presidency after instructing them in the coming days."

"The country's reform will only be possible with a national majority government,” Sadr added.

It seems that Sadr is making a political maneuver to stir public anger against his Shiite opponents.

He has comfortable representation in the current government, and the food security law breathed fresh air into the government — parliament's summer holiday is coming soon as well.

Sadr may be signaling that he is using this opportunity to warn of street protests this summer.

The Coordination Framework does not have enough members to form a government, and it knows that any government without Sadrists will not last very long.

In such circumstances, Sadrist-backed protests will certainly challenge the Coordination Framework and affect its national reputation, as it will be seen as the obstacle to forming a government and implementing reforms that Sadr is calling for.