The announcements come as Israel seeks to reinforce and expand its relationships in Africa. 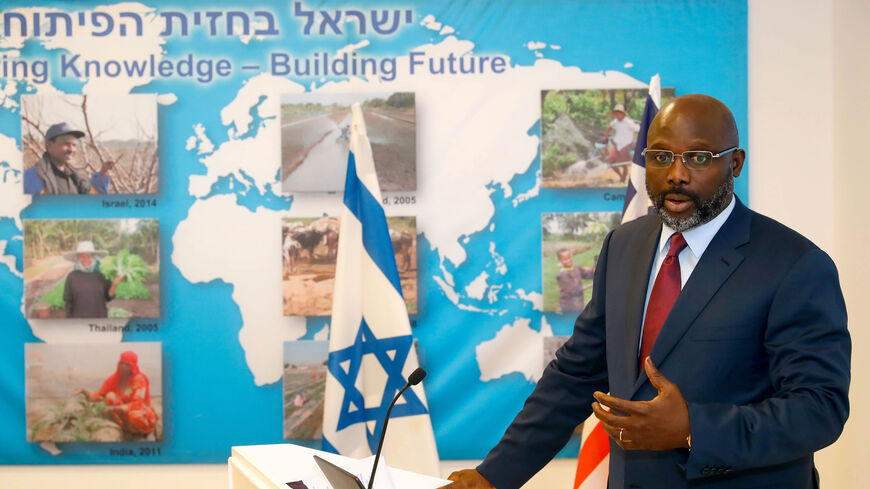 Liberian President George Weah delivers a speech during his visit to the Mashav center, an Israeli agency for international development cooperation, in the Israeli kibbutz of Gash Shfayim, north of Tel Aviv, Israel, Feb. 26, 2019. - Jack Guez/AFP via Getty Images

Liberian senior officials said June 8 the country intends to open a trade office in Jerusalem that will eventually become an embassy. Israeli press was citing members of a visiting Liberian delegation headed by Minister of State for Presidential Affairs Nathaniel McGill. Accompanying the minister of state to the meeting with Israeli President Yitzhak Herzog were Minister of Commerce and Industry Mawine Diggs, Minister of Agriculture Jeanine Cooper and Minister of Information, Culture Affairs and Tourism Ledgerhood Rennie.

Liberia had severed diplomatic ties with Israel following the 1973 Yom Kippur War, but then restored them in 1983. Over the years, relations deepened even further, with the signing of bilateral cooperation agreements on aviation, economy and technology. The two countries also cooperate on security. Liberian President George Weah visited Israel in 2019 and met with then-Prime Minister Benjamin Netanyahu. The two leaders had met two years earlier, before Weah was elected president, during a one-day visit of Netanyahu to Liberia for a summit of the Economic Community of West African States.

The visiting Liberian delegation held a series of high-profile meetings in Israel, including with President Isaac Herzog who hailed the warm bilateral relations, and with Deputy Foreign Minister Idan Roll.

"Israel has deep respect for Liberia," noted Herzog, adding that Israel considers Liberia as a "strategic partner in Africa." The president said that Israel could assist Liberia in several sectors, stating, "We have all kinds of expertise to assist Liberia in its development drive, so the sooner we start our engagements the better it will be." In reference to the 1984 official visit to Nigeria by his late father President Chaim Herzog, Isaac Herzog said he’d like to visit the country next year, noting, "I want to follow in my father's footsteps."

Responding to Herzog, McGill said, "President Weah wants to rekindle the historic ties our both countries have relished over the years, that is why we have come to deliver a special message from him as contained in this formal letter he has sent to you and your government." McGill also said the establishment of a trade mission in Jerusalem will set the basis for a full diplomatic representation to Israel in the future.

Roll tweeted after the meeting with the delegation, “It was a pleasure hosting a ministerial delegation from the Republic of Liberia headed by Minister of State McGill. I thanked the participants for Liberia’s support of Israel in the UN and for its decision to open an official office in Jerusalem, Israel’s capital."

Liberia and Suriname join several other countries that had opened diplomatic missions in Jerusalem in recent years. The United States, Guatemala, Honduras and Kosovo have embassies in Jerusalem. Australia, Hungary and the Czech Republic have either trade or cultural missions in the city. In Africa, until the Liberian announcement, only Malawi pledged to open an embassy in Jerusalem. Malawi announced its plan in November 2020, but so far, the embassy has not been opened.

The decisions taken by Liberia and Suriname on Jerusalem mark diplomatic achievements for the Bennett-Lapid government, as the pledges and inaugurations of embassies and missions took place for the most part during the Netanyahu government and under the Trump administration. The decisions now reflect the continuation of Israel breaking international isolation and advancing international recognition of Jerusalem as its capital.

The announcement of Liberia also signals another step in Israel reinforcing its ties with Africa. These diplomatic efforts on Africa, originally championed by then-Foreign Minister Avigdor Liberman and by Netanyahu, are also part of Israel’s current diplomatic priorities.

Israel’s diplomatic efforts for further rapprochement with Africa are expressed in different spheres. On June 1, we reported here on a special Israel-Africa conference organized by Israel’s embassy in Paris, with the participation of dozens of senior diplomats, academics, businesspeople and journalists, including Israel’s Ambassador to Senegal Ben Bourgel and the ministry’s Deputy Director General, head of Africa Division Sharon Bar-Li. The conference attracted much attention of international media. Also June 1, Lapid met in Jerusalem with his Togolese counterpart Robert Dussey, whom he hailed as a great friend of Israel. "Israel is back in Africa, and I am looking forward to continuing to work together to deepen our ties with a close friend and proven partner like Togo," tweeted Lapid after the meeting.